Webcomics may not be as in vogue as they were a few years ago, but there are still quite a number of continuing series out there. And the ones that have stuck it out are usually the better for it. Perhaps these online series make inconvenient beach reading, but if you haven’t heard of these five series you should check them out when you need to retreat indoors.

Red Moon Rising by Rose Loughran
Official blurb: “When her brother abruptly flees the capital for reasons unknown, Adrianna is dragged into a mess of politics and scandal by the nation’s military, who seem to have an unusually keen interest in finding him.

“Red Moon Rising is a full-colour, steampunk fantasy webcomic set in the midst of a magic-fuelled industrial society, following one person’s mistake and the knock-on effect it has on the people and the world around them.” 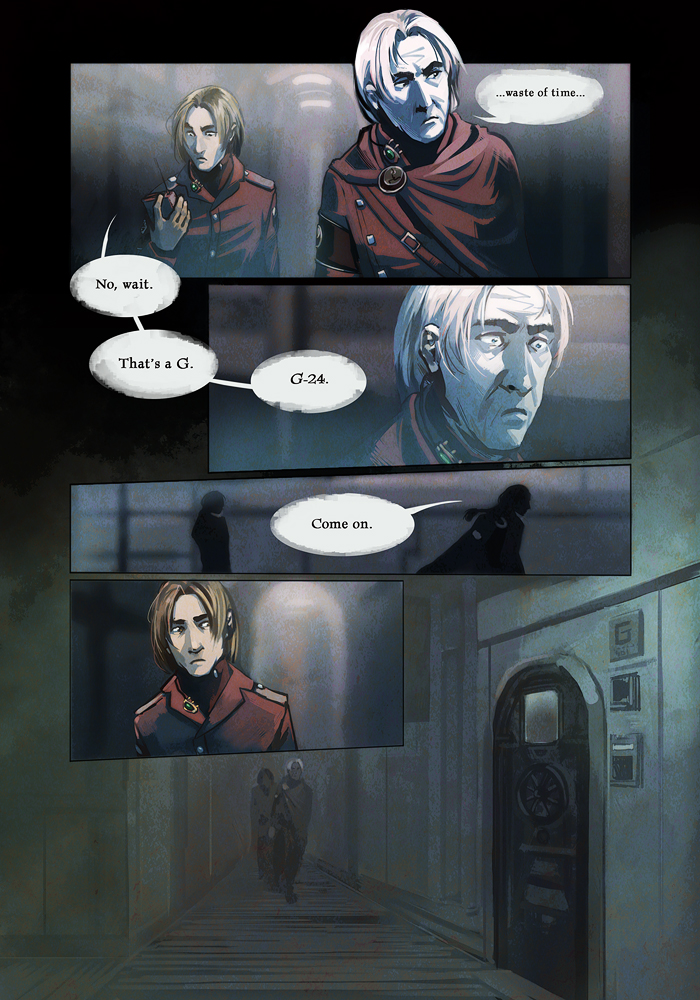 Page 4 of the Prologue.

Unofficial blurb: I was originally drawn to this series because of the art style. This is worlds away from the comics of the MS Paint era, in which dialogue was king and all you needed were fairly adequate humanoid figures to move the story along. Red Moon Rising has a world you can picture yourself in (if you want to anyway) and its creator uses color to great dramatic effect. The majority of the pages would look fantastic in a glossy monthly, and they feature a nice flow and arrangement of panels. The character designs are definitely better than average, but aren’t too flashy due to the series’ realistic bent. There’s some magic though, and space ports and steampunk goggles too.

Unofficial blurb: If you’re in the fantasy RPG gaming sphere, you may have heard the name Dresden Codak in connection to his redesign of the Legend of Zelda game that stars Zelda as the hero. It’s a pretty awesome concept, and displays the character design skills already being put to use in his current Dark Science arc. The heroine of this series is a robot-girl named Kimiko Ross. She’s smart, curious, and perhaps a bit overconfident, but in the way young heroes should be. She and the other characters populating this world of Departments of Inquisition and Opposition, and energy harvested from revered authors spinning in their graves, have a perfectly not-too-cartoonish look that fits the tale’s sense of fun and adventure. This series is also partially steampunk-influenced, but ditches the Victoriana for a cool 1920s-1930s aesthetic.

Sfeer Theory by Little Foolery (Artist: Jayd Ait-Kaci; Writer: Alex Singer)
Official blurb: “PREMISE (n.) : Sfeer Theory is the biography of a semi-immortal wizard named Balzac whose duty is to uphold and guard an empire, by way of a magical version of Atlas. The Uitspan Era addresses the beginning of his livelihood, and the Uitspan Age addresses the possible end of it.” 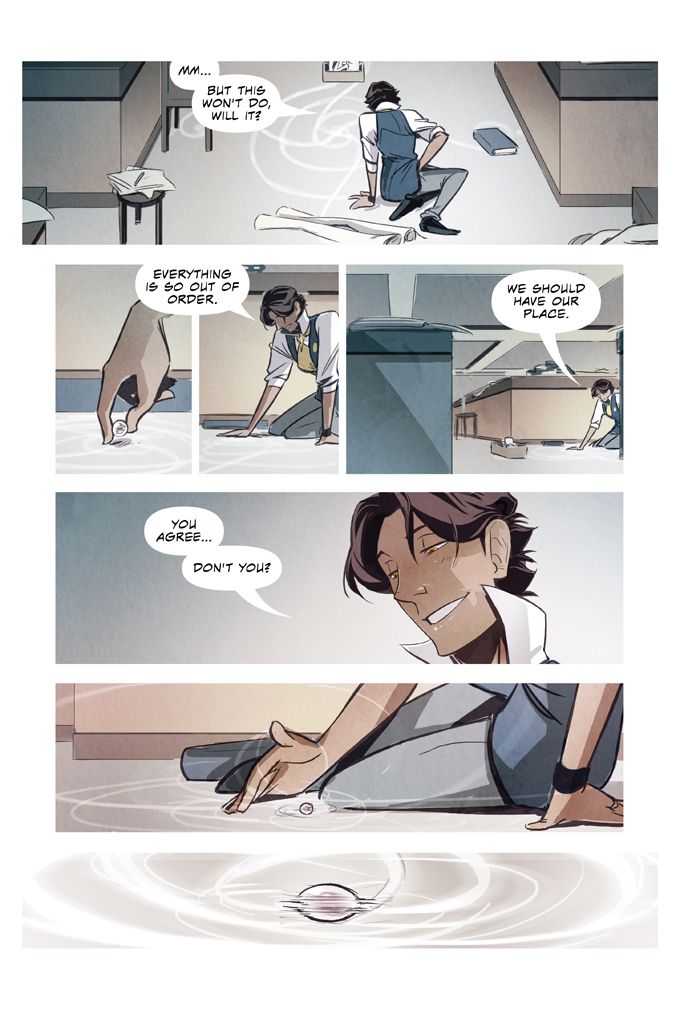 Page 33 of Chapter 1 of the Uitspan Era.

Unofficial blurb: Just taking into account the official premise, this webcomic may sound like quite the undertaking. Don’t be fooled by that summary. It’s not that simple.  Sfeer Theory not only addresses the mysterious Balzac, doing so through the eyes of young professorial assistant and secret magic-user Luca Valentino, but it is also spins the tale of the nation of Valencia and the Empire of Warassa. These two countries have a complicated relationship and the political tension can affect even magical studies at an esteemed university like Uitspan in Warassa. With Luca and Balzac and the studies of Sfeer Theory in Warassa, turmoil and rebellion in nearby Valencia, and a cast of at least half a dozen intriguing characters, this comic gives you amazing pieces of a whole world that the creators have dreamed up. The series is on hiatus at the moment due to other projects, but that just means you have time to pore over every fantastically drawn page that exists so far.

Nimona by Noelle Stevenson
Official blurb: “Lord Ballister Blackheart has a point to make, and his point is that the good guys aren’t as good as they seem. He makes a comfortable living as a supervillain, but never really seems to accomplish much – until he takes on a new sidekick, Nimona, a shapeshifter with her own ideas of how things should be done. Unfortunately, most of those ideas involve blowing things up. Now Ballister must teach his young protégé some restraint and try to keep her from destroying everything, while simultaneously attempting to expose the dark dealings of those who claim to be the protectors of the kingdom – including his former best friend turned nemesis, Ambrosius Goldenloin.”

Unofficial blurb: I knew about Noelle’s drawings (under the her art name Gingerhaze) from the time of the “Broship of the Rings,” so when she started a webcomic I was thrilled. It’s actually going to be a print book from HarperCollins in 2015 once it’s all finished, but she’s releasing it page by page on her website for the moment. Nimona plays around with superhero and supervillain tropes, throws in a badass shapshifter, adds dastardly science and genuine emotion to the mix, and delivers it all in a unique medievally based sci-fi style. This series is one of the more stylized comics on this list, but its also a bit more humorous and may appeal to younger readers as well as to the young at heart.

Hero by Hwei
Official blurb: “HERO is a story about a perfectly ordinary boy with no memory of the past and no urgency for the future; who one day accepts a most extraordinary offer to travel to distant places and invisible cities.” 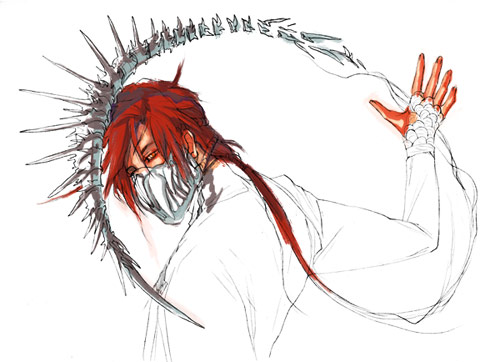 Unofficial blurb: Hero is different from these other webcomics in that its formatted so that when you open a page, all you see is the digitally painted art. The words are only displayed when you mouse over the right panel, and the amount of text varies quite a lot. This makes Hero one of those comics that does actually have to be a webcomic until technology says otherwise. At the same time, however, it doesn’t feel like a typical webcomic. The majority of the text is the boy’s inner narration and he tends to be a rambling, thoughtful narrator, but his thoughts are smoother than some of the actual dialogue. The story moves forward at a decent enough pace, as the boy leaves the only place he’s known to hitch a ride with a mysterious, perhaps nonhuman warrior. Maybe it’s the art style, or the simple title, but this comic feels oddly timeless, or perhaps without an era. In this world, only certain people can hear this boy speak, there may be other planes of existence, animals can sometimes communicate with people, and the warrior uses a motorcycle and a sword. It seems like the author has planned out fifteen chapters, so I hope there is a satisfactory ending awaiting our narrator and his readers.

Bonus: Check out this beautifully drawn collection of short fairy tale and fantasy horror webcomics by Emily Carroll! Because who doesn’t love a creepy story on a summer night?