For some comics you can read in paper or on your favorite handheld device, here are a few fairly new or continuing series. Nothing here is from the Big Two (Marvel or DC) and only one is vaguely about masked superheroes, but there sure are a lot space suits and detectives.

All You Need Is Kill by Takeshi Obata (VIZ Media) – Contains mecha suits, creepy aliens, and a badass heroine.
Official blurb:  “Death Note creator Takeshi Obata’s manga adaptation of the hit novel by Hiroshi Sakurazaka, inspiration for the hit movie Edge of Tomorrow! When the alien Mimics invade, Keiji Kiriya is just one of many recruits shoved into a suit of battle armor called a Jacket and sent out to kill.” 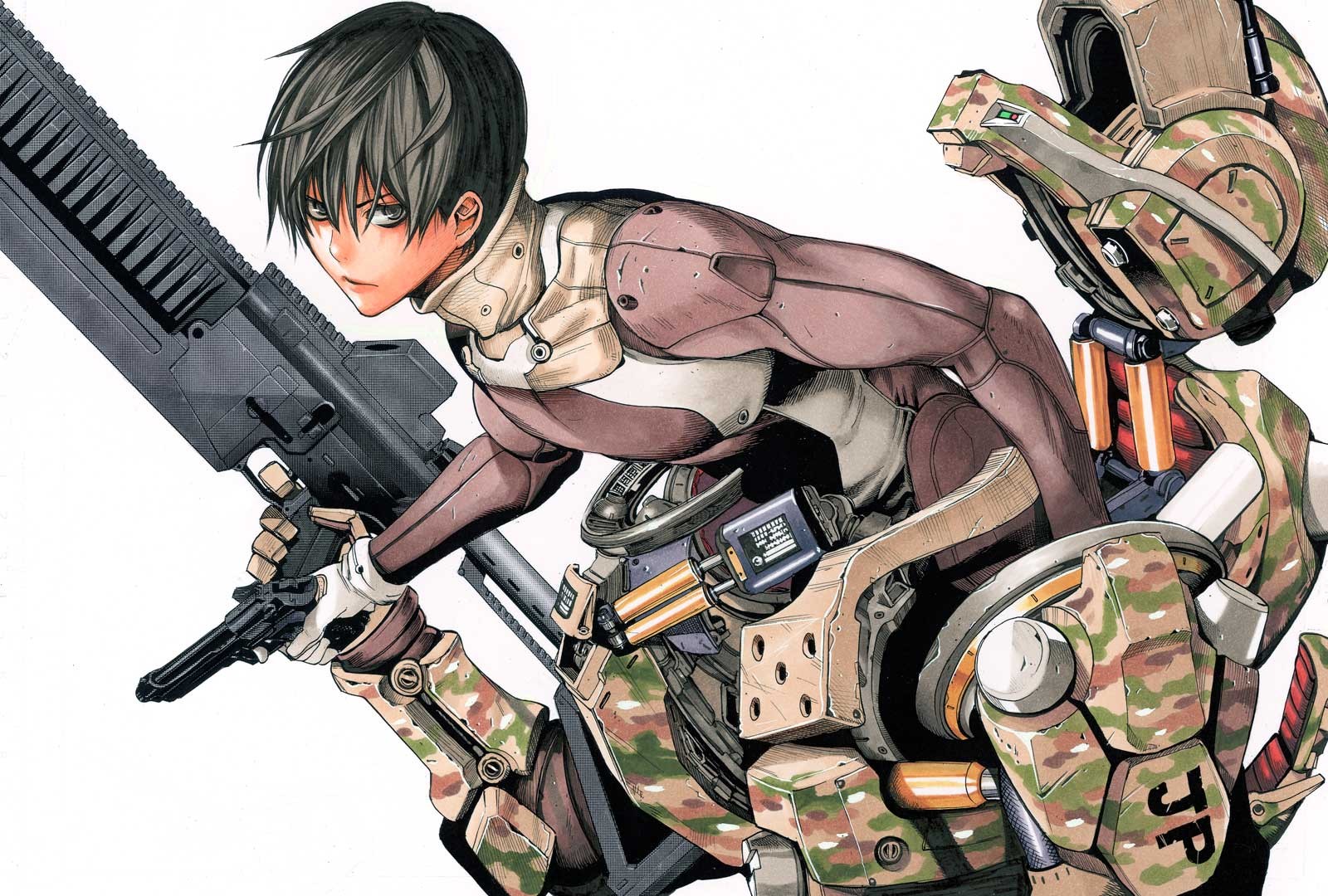 Unofficial blurb: As you can read above, this isn’t an original story by Obata. Nor is it the first time this story has been adapted for the graphic novel format. But it’s probably the coolest the tale has ever looked. If you have read Death Note or any of Obata’s other work, you’ll understand how getting him to do the art for this version was a great idea. His ability to depict emotionally-charged expressions and dramatic fights will probably come in handy in this story of death, regeneration, and mysterious alliances. Also, he’s apparently pretty much a master of drawing mecha suits too.

C.O.W.L. by Kyle Higgins, Alec Siegel, & Rod Reis  (Image Comics) – Contains Chicago gangsters, superpowered Russians, and 1960s’ hairstyles.
Official blurb: “Welcome to the ‘Chicago Organized Workers League’- the world’s first Super-Hero Labor Union! While C.O.W.L. once stood as a beacon of hope against an epidemic of organized crime and an unbeatable ‘brotherhood’ of Super-Villains, the union now faces its fiercest foe yet-a disillusioned public. In targeting the last of the great villains, C.O.W.L. attempts to prove its value to the world and to each other, while staving off villainy from both outside and inside its offices.”

Unofficial blurb: I recommend this series with reservations because it is only two issues in and everything is still pretty amorphous for the most part. But the concept is cool, the art is perfect, and the creators are making at least a few hard storytelling decisions. What I mean by the latter is that while it would be easier (and more formulaic) to write this story from the beginning—show the founding of C.O.W.L. and its growth—the writers have decided that’s all in the past and the organization is at a point where some people are questioning its necessity anymore. This is a more interesting choice, but then again it’s what Alan Moore did with Watchmen, so that take that with a grain of salt. This series also has a pretty routine cast in terms of the characters’ gender and ethnicity (one woman, one POC), so I’m hoping the further issues at least make these characters really complex.

Dead Letters by Christopher Sebela & Chris Visions (BOOM! Studios) – Contains amnesiac detective, scary gangsters, and angels(!).
Official blurb: “Waking up in a fleabag motel with bandaged arms and a revolver on his desk, Sam doesn’t remember a thing – not how he got here, where here is, or who he is. But the armed men knocking on his door do and Sam will have to use every trick from his forgotten repertoire to outrun and outsmart his way through a hardboiled wonderland of gang wars, femme fatales and big secrets.” 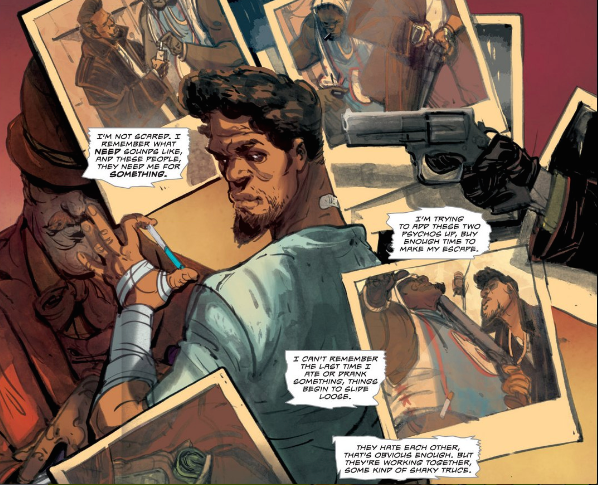 Panel from Issue 1 of Dead Letters.

Unofficial blurb: This is one of the more thickly plotted series out there in terms of who’s really who and what’s really what. While protagonist amnesia is a pretty standard trick to make readers discover facts along with the hero, it’s done very well here. I admit it took two issues for me to really get hooked on this one, but by the third I was totally a fan. Sam is a likable rogue, who is quick-witted and vulnerable enough to be sympathetic without being pitiable. Like any dense city, the place where he is (also rather a mystery) is full of helpful and dangerous citizens, and even those who seem like allies at first may not be as kind as they appear. The art in this comic is amazing and one of the series’ strong points as well. I hope this one is around for a while.

Official blurb: “A teenage cop from a high-tech future is sent back in time to 1986 New York City. Dayoung Johansson is investigating the Quintum Mechanics megacorporation for crimes against time. As she pieces together the clues, she discovers the ‘future’ she calls home – an alternate reality version of 2013 – shouldn’t exist at all! Blast off with the new ongoing series by BRANDON MONTCLARE (Halloween Eve) and Eisner Award nominee AMY REEDER (Batwoman, Madame Xanadu).” 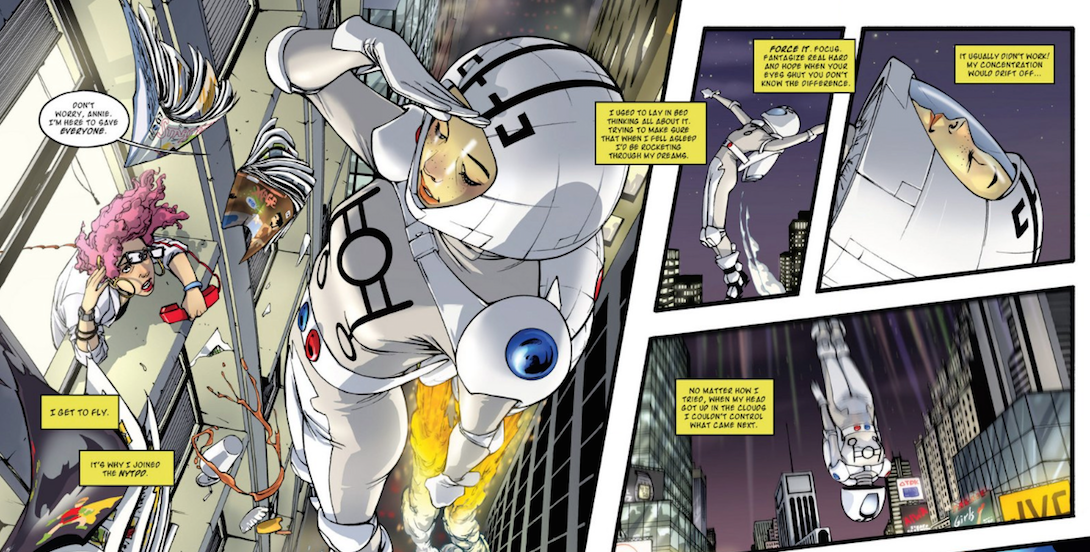 Unofficial blurb: This comic has jet packs, shady mega-corporations, and smart characters, what more do you need? It also manages to use time travel as a serious plot device without making things too 12 Monkeys weird or New 52 DC comics-level grim and gritty just for the sake of being so. Reeder is a talented artist who is always pushing herself to try new perspectives and layouts, and she is actually what started me reading this series. (I also met her once and can report that she’s super nice.) The story so far is a great match for the adventurous art and the first five issues have just been collected so now’s a good time to pick them up.

The Midas Flesh by Ryan North, Braden Lamb, & Shelli Paroline (BOOM! Studios) – Contains dinosaur scientists, space oligarchy, and a planet of gold.
Official blurb: “Fatima and her space crew have decided to return to Earth-a planet completely sectioned off, abandoned, and covered in gold-to find out exactly what happened to this once thriving planet and see if they can use that knowledge against the evil empire that’s tracking them down. As luck would have it, they just landed the most powerful weapon in the universe: some ancient dead guy’s body.”

Unofficial blurb: Remember that guy who did the dinosaur comics? Yeah, that’s the author of this series that appropriately includes a dinosaur who is a scientist in a rogue crew of three. North came up with the fascinating concept and writes it well, but fortunately he doesn’t do the illustrations. His awesome art team, Lamb and Paroline, also work with him on Adventure Time and they help contribute to the lighter side of the comic’s aesthetic with a simple style and bright colors. The story is a balance of the very creative and enjoyable with some pretty serious stuff (everyone on Earth is dead from the beginning), but the series never seems to go overboard and qualifies as a good all-ages book.