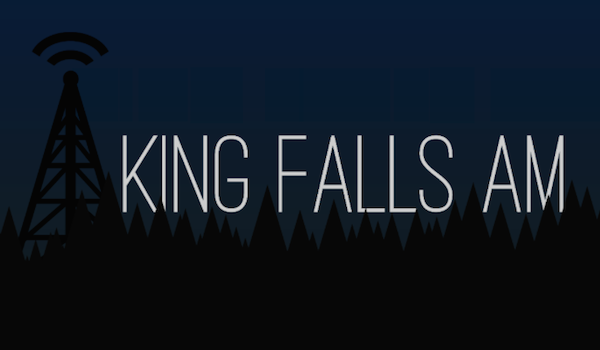 King Falls AM is a brand new podcast that follows a fictional talk radio show in a tiny place called King Falls, where paranormal occurrences seem to be plaguing its denizens. The show is hosted by Sammy Stevens, a new resident of King Falls, and King Falls AM producer Ben Arnold. The duo do their best to maintain the integrity of the show despite frequent calls from foul-mouthed citizens and interruptions by strange incidents in the town.

This podcast is charmingly witty and somewhat reminiscent of the cult classic television series Twin Peaks, though decidedly less campy (if only because it’s virtually impossible to attain a Twin Peaks-level of campiness). I’m not going to go into too much detail about the show, because it’s something you simply have to hear for yourself. The first episode immediately pulled me into the world of King Falls and kept me transfixed until I realized I’d burned through every available episode.

King Falls AM airs on the 1st and 15th of every month, so be sure to keep an eye out for new episodes posted on SoundCloud. The first three episodes (all between 10 and 15 minutes) are already up, so there’s only one question you need to ask yourself: what are you waiting for?

Those who crave visual clues can check out the podcast’s Instagram page for the occasional peek into the fictional town of King Falls. Follow the show on Twitter @KingFallsAM or “like” it on Facebook to get the latest updates about this paranormal podcast!

My suggestion? Lean back, close your eyes, and treat your brain to this delightfully weird audio adventure.