With a horde of Strigoi approaching, Agustin (played by Miguel Gomez) and his people fight them off while the others drive the nuke away. They kill the horde but they’re forced to retreat when more keep coming.

The Master/Eldritch (played by Jonathan Hyde) organizes a large horde of Strigoi to go through the city to find the bomb. Ephraim (played by Corey Stoll) and the others regroup and Vasiliy (played by Kevin Durand) shows them an underground water tunnel they use to stash the bomb. Dutch (played by Ruta Gedmintas) comforts Ephraim when he laments that Zack (played by Max Charles) has been completely corrupted by the Master.

Quinlan (played by Rupert Penry-Jones) comes up with a plan to lure the Master underground and detonate the bomb there to keep from killing the people in the city. However the detonator will have to be used close to the bomb and Vasiliy volunteers to sacrifice himself to do it. Dutch is emotionally wrecked when she hears this and confesses her feelings for Vasiliy, he admits his feelings but doesn’t change his mind. Agustin and Roman (played by K.C Collins) the only survivors of the Strigoi fight attempt to reunite with the others but find Strigoi around every corner. 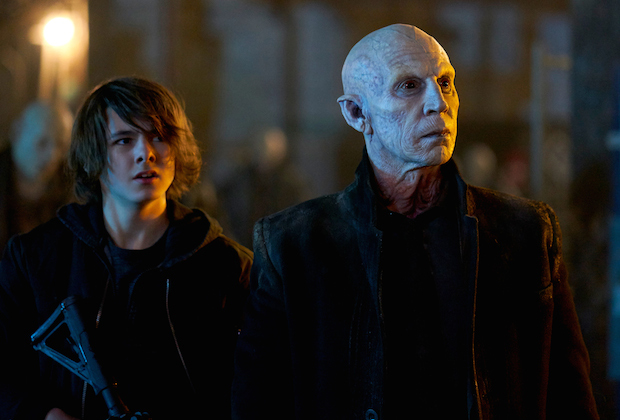 This being the series finale I expected large scale fights and possibly a full on human/Strigoi war; while there are some action sequences it’s wasn’t on the epic scale I thought it would be. Instead the episode focuses on the emotional journey of the characters, the biggest being Vasiliy’s decision to kill himself to kill the Master and keep from destroying the city. Vasiliy always acts in the interest of others and his decision opened the door for Dutch’s emotional realization that she loves him. Putting the focus on the characters is necessary since we can’t be invested in who we want to live without a reason to. But after all the episodes of people standing up to the Strigoi I expected to see people rise up and join the fight. The fact that we didn’t see that happen makes that entire subplot meaningless since there was no big payoff.

Zack watches as Manhattan burns and the Strigoi kill everyone, once they’re dead the Master plans to locate Ephraim and the others by following the sound of their heartbeats. Agustin makes it back and warns that the Strigoi are murdering all the humans and closing in on them. In a flashback Ephraim meets with Abraham (played by David Bradley) and Vasiliy where Abraham warns Ephraim their fight with the Strigoi might cost him everything.

In the present Ephraim attempts to talk Vasiliy out of his suicide mission at Dutch’s request but Vasiliy just asks that he take care of Dutch and give Zack another chance. They lure a Strigoi to their base to bait the Master into coming to them, Strigoi swarm the underground tunnel and while fighting them off Ephraim is disheartened to see Zack fighting with the Master. The Master unleashes a high pitched whine to incapacitate them when Quinlan attacks him; he drags the Master into an elevator and Vasiliy blows the cable sending them down where the bomb is. Before Vasiliy can take another elevator down with the detonator Ephraim beats him to it. 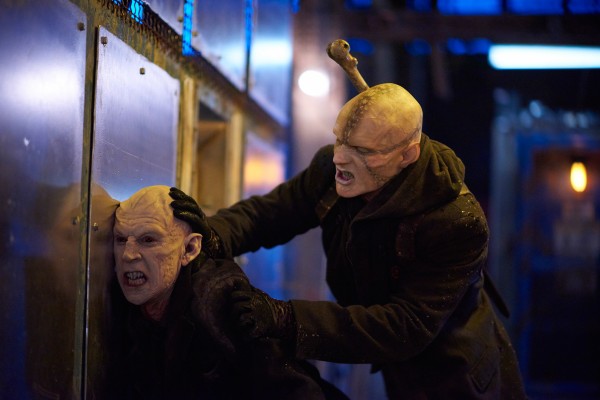 The show has never shied away from violence before but the purging of Manhattan was kept off screen, it would have had more impact if we could have seen some of it. Even the fight scenes between the Master’s forces and Ephraim’s group felt scaled back and repetitive, it was shot after shot of someone shooting at Strigoi until they fell. But most of the time these characters are all separated and watching them all come together for a final battle was thrilling. The flashback with Abraham was almost obligatory; he’s been a central figure in the series from the beginning and he was due to pop up somewhere in the finale. It also set up Ephraim’s decision to sacrifice himself and allow Vasiliy to live; in Ephraim’s mind he already lost everything and had nothing to live for. And if we had to choose between Ephraim and Vasiliy dying I think almost anyone would choose the former.

The Master and Quinlan engage in a brutal fight and Quinlan manages to rip out the Master’s throat appendage before the Master crushes Quinan’s head. When Ephraim appears the Master orders Zack to kill him but Zack can’t bring himself to do it, the Master attacks Zack and when Ephraim intervenes the Master infects Ephraim as his new host. The Master attempts to entice Zack to rule with him ‘as father and son’ but Zack sees through it and detonates the bomb killing them both. Five years later Vasiiy narrates that the remaining Strigoi were killed (except a few kept by the government for research purposes). Agustin, Dutch, Vasiliy and Roman all go on to live happy productive lives and Dutch and Vasiliy are finally together.

Quinlan got a warriors death and although we’ve known he always going to die you still rooted for him and hoped he might make it. Zack came full circle, nearly wiping out humanity with one nuclear bomb and saving it with another. His role in this episode as the first time in a while (maybe ever) that Zack was relevant to an episode’s story. While he had his moment here it doesn’t erase the fact that for most of the series his character was both irritating to watch and generally didn’t add to the story. The epilogue gave all the major players their happy ending but kept an ominous tone with the reveal that Strigoi were kept alive for experiments. Humans won and got a second chance but almost immediately reverted to our self-destructive ways.

“Before I detonate the warhead I’ll probably say something clever and cool, like Bruce Willis would say.”

Overall the finale and the series itself was fun, although I’ll miss the show I’m glad it had a proper ending which is better than going on for too long.

“May you see a beautiful city and a brilliant people rice from this abyss.”

Even though Zack turned himself around I can’t say I’m too broken up that he didn’t make it.