Ephraim (played by Corey Stoll) and Alex (played by Angel Parker) find an abandoned town and a phone with a young girl’s video blog documenting. The girl does not be forced into New Horizons by her father and plans to remain hidden in her home, but when they arrive it’s empty.

Vasiliy (played by Kevin Durand) is frustrated when his group reach another silo and find Stirgoi removing the missile, denying them the part they need for their own missile. Quinlan (played by Rupert Penry-Jones) wants to attack them alone but Vasiliy and Charlotte (played by Rhona Mitra) convince him to work with them.

Charlotte rallies the other men by lying and saying the truck is loaded with silver they can take.  Dutch (played by Ruta Gedmintas) is removed from a cell and finds herself ‘invited’ to a candlelit dinner with Eichhorst (played by Richard Sammel). He drinks a glass of blood and taunts her that it came from the recently born baby in the facility. He demands the location of Abraham (played by David Bradley) but she doesn’t know where he is and glats that he will never be able to have that satisfaction.

Eichhorst has Sanjay (played by Cas Anvar) locate Abraham in a coma being held in another experiment group. 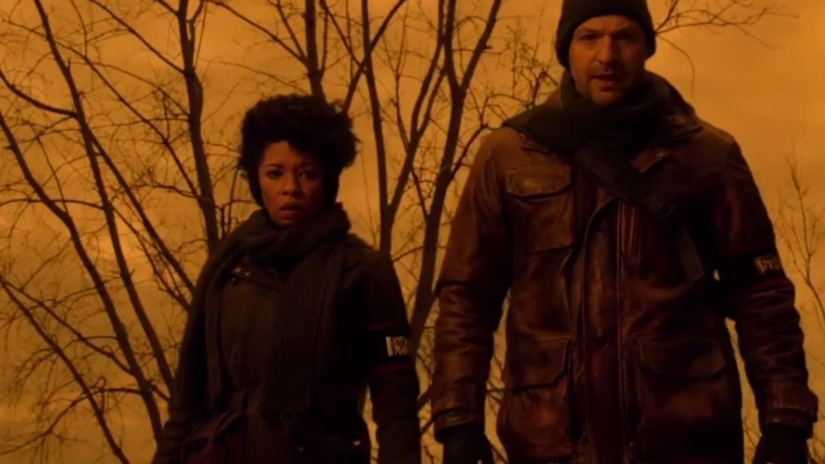 They found something horrible (what a shock).

The little girl’s video was a nice framing device to the continued mystery of New Horizons (which we all know is bad). The continued hunt for a nuclear weapon is presented as one of the main storylines of the season but it’s starting to lag. There’s obvious tension in the group but the cross country hunt has become repetitive, let them get what they need and move the story to the next phase.

The same definitely goes for Dutch’s story of the damsel in distress especially after that scene with Eichhorst. We had to watch her relive his previous assault and go through it all again, and the fact that it’s always Dutch put in that situation makes it that much more uncomfortable. But the one bit of good that came out of it was we finally learned what happened to Abraham after being absent for half the season, now that we caught up with all the characters there’s a sense of the story shifting to the next phase.

Ephraim and Alex are held at confronted by a woman who is infected and reveals she went to New Horizons but escaped after getting a bad feeling. Ephraim asks for the woman’s help finding the location so he can learn more about the facility. Eichhorst has Abraham woken up and tries to make Abraham admit there is no God in exchange for a fast death.

Dutch is taken with a group to be shaved and drained but she rallies the others to overpower the guards, while the others escape Dutch goes to find Abraham. She finds Abraham only to be confronted by Eichhorst, but Dutch sets him on fire with an improvised Molotov cocktail and they escape. Quinlan attacks the convoy and takes out most of the vehicles and Vasiliy leads the rest of the group to kill the remaining human collaborators and Strigoi. When his men realize there is no silver they turn on Vasiliy but when one is killed by a stray Strigoi they run and Vasiliy and Quinlan claim the weapon. 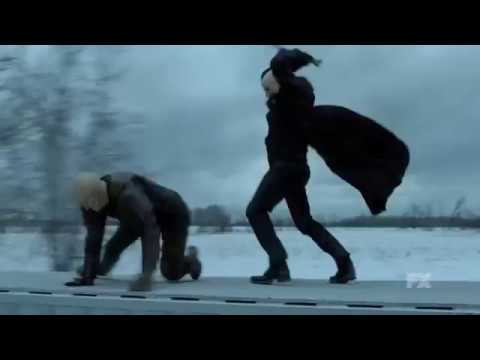 The fight scene on the highway was a great action piece, one of the more stylized ones the series has ever done and it was thrilling. Best of all they finally completed their nuclear weapon and we can move that storyline forward. The woman Ephraim and Alex encounter continues to highlight the obvious that New Horizons is bad. But since we have known this for so long it almost feels like we’re waiting for the show to catch up to us which is bizarre.

It’s weird that Eichhorst would send Dutch to be drained without realizing she would at least attempt to fight back. But after spending half the season being held captive and tortured by Eichhorst she finally burst free and saved Abraham in the process. Watching Dutch ignite Eichhorst was immensely satisfying after watching several episodes of him terrorizing her.

The woman leads Ephraim and Alex close to New Horizons and they find hundreds of suitcases, the woman leaves and refuses Ephraim’s offer to kill her. Moments later she returns as a Strigoi under the Master’s control and taunts him about Zack (played by Max Charles) before Ephraim kills the woman. They find New Horizons and confirm that the promise of people being farmers was a lie, they are being farmed.

The big reveal at the end of the episode didn’t feel as dramatic as it was intended because we have known for weeks what Ephraim just discovered. It seemed to be leading up to Ephraim being reunited with Abraham and Dutch and while it didn’t happen it hopefully will soon. With the season halfway over the real fun will kick in when the old gang reunites to launch the final battle against the Master.

“I need no one, I’ve been hunting the Master on my own for over a thousand years.” “Yeah and how’s that working out for you?”

“The very system that you created has robbed you of your greatest victory.”

As great as it was to see Dutch finally escape you can’t help but wonder how far she can realistically make it with Abraham drugged and unable to move on his own.