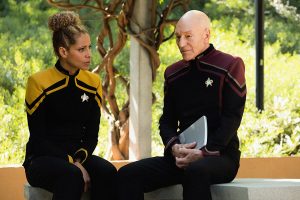 Picard Is Not Made For New Fans At All

Once I knew I was reviewing Picard, I had every intention to go into the show with the mindset of a new Star Trek fan—having seen one or two episodes of TNG only. I wanted to review for fresh eyes.

This turned out to be difficult. The show assumes you know the world, the characters, and the lore of TNG. You need it to even get through some of the most basic plot points. You need to know, at the very least, who Data is, what the Borg are, what Romulans are, and somewhat how this future works. Thankfully, I had enough pop culture knowledge to get along, and I found a mix-bag show.

But let’s start with the good. Let’s start with the excellent. Because this is my first real experience with Patrick Stewart as Jean-Luc Picard. And regardless of the surrounding story, I understand why this man is a treasure of an actor. 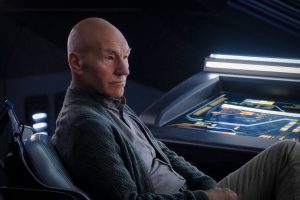 I was blown away by him. Floored by the genuine compassion and kindness that emanated in his portrayal. He became my Star Trek captain instantly. I can understand how people in this universe would willingly fight for this man.

Sadly, the surrounding stuff is lesser. The acting from everyone else is fine, as are the effects on almost all counts, but the show has the problem of being too obsessed with its legacy. The number of small in-jokes and “Earl Grey” references got to be obnoxious. If the show continues doing that every episode, then it will grow stale.

But what about the actual story? I understand Star Trek to be a show that lives by its storytelling. Thankfully, there are solid concepts here. Fallout 4, of all places, beat them to the punch of “synths,” but the exploration of the topic here is weighted away from the pulpier aspects of the concept. Instead, we have a tale more of personal and societal connections. 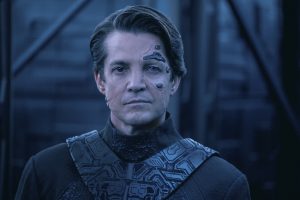 Picard Has A Interesting Enough Plot To Carry It

This is not Do Androids Dream of Electric Sheep. It’s not asking questions of what humanity is, but of what are the moralistic obligations regarding any instance of personhood. Be they human, Romulan, Synth, or released Borg.

Whether it is engaging outside these moralistic explorations is another matter. It’s not paced particularly strongly, nor is it without some cliché writing. The action is serviceable, with some instances of kinetic lethality. In short, competent. I can’t see someone eagerly watching week-to-week, but as binge-able series for those in need of one, it’s fun enough. If you’ve seen TNG, give it a try. If you haven’t, like me, Picard serves more as a sampler of a series we should already be watching. 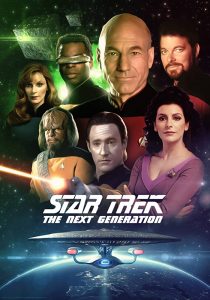