This episode of Star-Crossed felt sort of like a mini spy movie.

Roman and Drake realize destroying the Suvek didn’t work, so they enlist Emery and Grayson to help steal it from the Trags. Since revealing the existence of the Suvek would have repercussions for all Atrians, they have to move it secretly. It’s almost Mardi Gras in Louisiana, so the group plans to smuggle the Suvek out of a float they are making inside the Sector. Because they don’t know where the Suvek is, Sophia tells the guards about it, forcing the Trags to move it. After that, all they have to do is intercept them and sneak it onto the float. 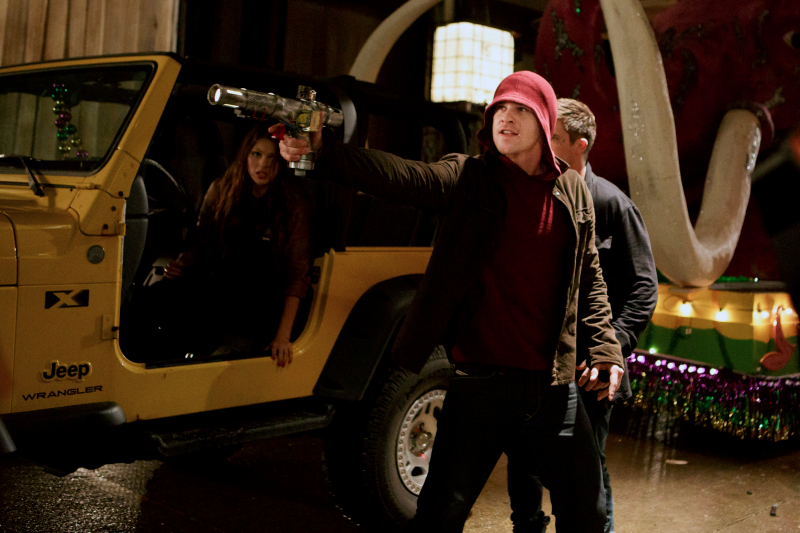 I sort of know how to use this thing.

The plot never lagged too much, and that made this episode very exciting (although the scene where they were stalled at the gate and fighting a bunch of Trag soldiers felt restricted and not as great as it could have been). It was also great to see most of the main characters involved in the plan. Sophia is a very endearing character, but she’s often left out of the main action, so I was glad to see her getting some screen time.

This kind of storyline wouldn’t be complete without some twists. Drake’s mother, Saroya, rigs the Suvek to kill anyone who tries to remove it from the Sector. Fearing for his life, she tries to stop Drake, however he ends up convincing her to help them and she deactivates the security. She later leaves the Sector for the hidden Atrian city, Eljida, but Drake stays behind to take care of his friends and pregnant human girlfriend, Taylor. The best twist came at the end of the episode. Grayson is transporting the Suvek and is ambushed by Zoe, who survived the explosion a few episodes ago.

I know that Saroya only built the Suvek because she wanted their protection from Castor, but it seemed unlikely that she would actually go through with it, especially since Castor was stripped of his power in the last episode. I was thrilled to see that Zoe was still alive because she was always fun to watch and I felt she was written off the show too soon. I hope, if the show gets picked up for a second season, that Zoe is made a series regular. 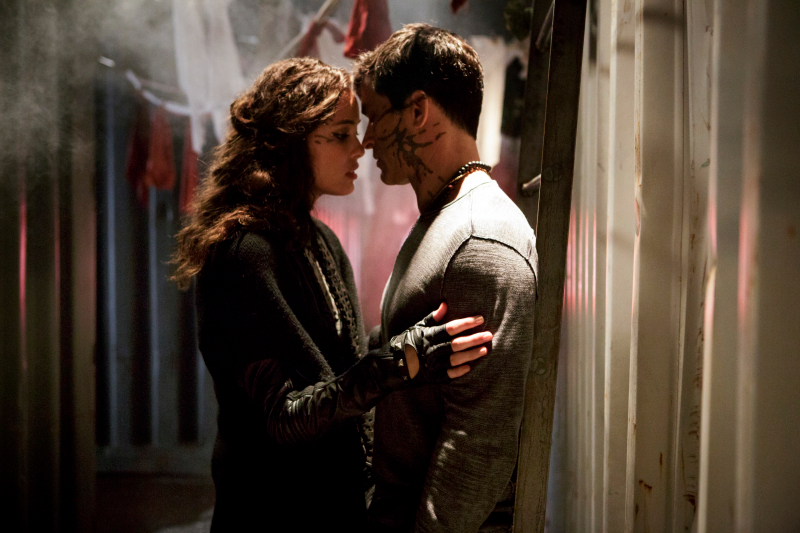 Your really cute man, but I got to kill you.

Castor, meanwhile, is plotting a return to power with the help of Teri. However, it turns out that Teri is still loyal to her mother, Vega, and steals a key from Castor that operates the Suvek. Since there is support for Roman to be the new leader, Castor ambushes him and stabs him with a knife laced with poison so he has no opposition. Seconds later, Teri takes the same knife and plunges it into Castor’s heart.

The show managed to make it appear that Teri had betrayed her mother, so the twist that she really hadn’t was unexpected. I think the way Castor was written off the show was all wrong . It would have been more satisfying to have seen Roman and Castor fight to the death instead of that brief struggle they had toward the end of the episode. Also, Teri being the one to kill Castor felt not only anticlimactic but rushed as well.

“And now this ‘Sumak’ thing is gonna wipe us all out? Why aren’t we going to the police about this?”

The people outside the Sector went from hurling insults to cheering pretty quickly.

“Roman was fun when I was younger, but I’ve tired of him. I crave someone stronger, wiser.”

Zoe shouting, “Touchdown! Or whatever,” when she hit Grayson was hilarious.