Emery manages to save Roman from his poison early into the episode with Teri’s help. When he’s all better, he and Emery celebrate by sleeping together and enjoy a rare moment of uninterrupted happiness.

Eventually, Emery answers her phone and she and Roman meet up with everyone at the Mardi Gras parade to find the stolen Suvek. Zoe has masked Trags pursue them through the parade and takes Taylor hostage for insurance. In all the chaos, Roman meets a man from the Atrian sanctuary (Eljida) who introduces him to his half-brother by Gloria. The man also tells him about the special key that operates the Suvek. If they get the key, it will shut down. 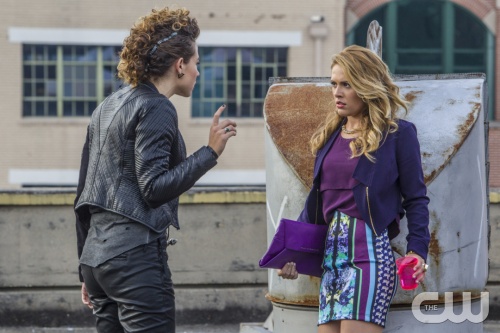 Serving as the season/series finale, this episode was expected to have high stakes and include just about every major character. Taylor was always left out of the action and it was predictable she would be the damsel in distress. I liked the scene where Gloria showed Taylor the Atrian housing community being constructed, showing her that she could raise her and Drake’s baby and set up a good story arc if there were a next season. Zoe continued to be a fun villain and I’m still wondering why she couldn’t have been the main antagonist of the season.

While Roman, Drake, Emery and Grayson fight Zoe and her team, Teri’s mother, Vega, gathers the Trags for an attack on the humans once the Suvek is activated. However, Teri betrays Vega and she’s arrested by Gloria. Vega tells Teri that her father is alive and will punish her for her betrayal. Roman manages to deactivate the Suvek but a dying Zoe uses a remote to activate it, it launches a blue electric pulse that seems to just knock everyone unconscious. The blue beam shoots into the sky, sending a signal to a fleet of Atrian warships, one commanded by what I assume is Teri’s father, and they prepare to lead an attack on Earth. 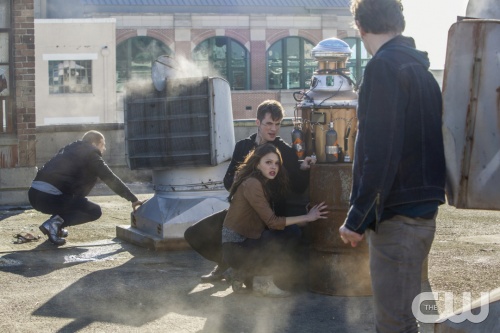 We may be in over our heads.

I loved the last-minute twist on what the Suvek was actually for, since it seemed stupid for the Atrians to think that killing one town of humans would help their cause. Having it bring an army of Atrians to Earth not only made more sense, it was more exciting story-wise. For instance, what were they doing in space for so many years? If I had to guess, I would say invading other planets in their search for one to inhabit. Seeing the major plans that Vega had going, I feel that she also should have had a larger role in the series, as she was a very interesting character. I would have liked to know what led her to becoming the Trags’ leader.

This episode marks the series finale of Star-Crossed, as it was not picked up for a second season. The show definitely had potential, but because it didn’t start out as strongly as it ended there was not much of a fan base. But for any diehard fans, there is always the world of fan fiction to keep the series alive.

“Your father killed our leader. You have defiled Atrian purity by seducing his heir, Roman. We want to watch you bleed.”

If someone is chasing you, not the best idea to run down a deserted alley.

“You wanna know what the hardest thing about pretending to be human was? Having to act like we were friends.”

There is always fan fiction for people who want to keep the Star-Crossed universe alive.

If you enjoyed Manny’s article and would like to read others like it, you can read the rest of his work HERE.