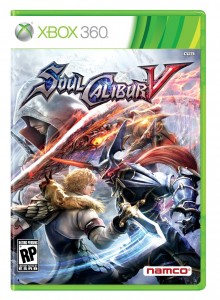 So you want to play SoulCalibur V.  However, you don’t know how.  All you know how to do is mash buttons, which never ends up working out well against anyone who has even a basic knowledge of a character.  The following is going to teach you how to effectively play with Algol, the boss of SoulCalibur IV.  He is unlocked by completing the Legendary Souls mode.

Algol is a pretty fast character, so you’re able to keep the opponent under pressure with him.  Stay on the offensive, no matter what range you’re at.  Algol has attacks that can do good damage from any range, so keep it up.

From long range, you should harry the opponent with the different variations of his arm cannon, which will fire an energy ball towards the opponent. (These use X+Y and different directions such as ↓,←, and ↑)  These attacks don’t do much damage but they can stop the opponent and break up their attacks.

From mid range, you should use Algol’s \Y,Y.  This move is fast and does good damage.  Another good move to use ←X, Y.  This move does a lot of damage and it’s pretty fast.  A lot of opponents won’t see the second part of the attack coming.  If you can strafe your opponent, use ↓↓ or ↑↑ Y.  This move is a guard break and if you hit you will stun the opponent which can lead into a combo using ↓X+Y, which will pop them into the air.  A good follow up to that is either \Y,Y or →↓\Y.  ↓B+Y is a low attack with good range.  If you hit the opponent, press Y and you Algol will fire a ball of energy.  A good follow up to this move is /X.  It’s incredibly difficult to block both the mid energy ball and the low slash.

Algol is very powerful at short range.  His ←Y,X is very fast and does pretty good damage.  For a guaranteed hit, follow up with /X.  →Y,Y,Y (You have to hit the opponent to do the whole move) is very fast and will fire an energy ball at the end.  Follow up with /X.  It will be hard for the opponent to block both the low slash and the energy ball. →X,X,Y. is a fast move that will throw the opponent behind you.  Follow up with X+Y for good damage.  While crouching, use low kicks (↓B) to make the opponent want to block low and then hit them with ↑B.  This move is a mid attack and does a lot of damage.  It can also be made stronger with brave edge.

Algol’s critical edge is different from other character’s in that it takes two full bars rather than one.  It is incredibly powerful though and can hit at any range.  Use it immediately after hitting the opponent with →→Y for a guaranteed hit.  Once you hit the opponent with the chair press ↓\→ Rt to finish the move.

Just keep pressuring the opponent and you should do well with Algol.  When the opponent backs away from you, use ←B+Y to grab them from some a little bit of damage as well as bringing them back into your bread and butter zone.  Algol has more moves, such as his two stances, which can be very useful.  He has a powerful command throw.  Use whatever works for you and never stop attacking and you should do fine.