When True Blood began in 2008, we were introduced to a new political world in which vampires had finally come “out of the coffin,” thanks to a Japanese made synthetic drink called Tru Blood. The series spared no expense on blood, gore and the most scandalous sex scenes we could think of. That said, I felt as though the final season (ever) fell so very short. I expected surprising deaths, betrayal, and a final scene that would shock the world. Instead, we got a total Mary Sue ending where everyone lived happily ever after, hearts and rainbows, the end. I couldn’t even bring myself to write this article because I was in total denial stage. Did Jessica and Hoyt really have a impromptu wedding so that Bill could walk her down the aisle? Yep. What the hell, HBO? Did Stephanie Meyer write this episode?

In fact, the only time that I felt satisfied with this season was when it came to Eric and Pam.

Eric bobbing his head to the music while hauling a car full of dead bodies? So satisfying. The fact that he and Pam took over New Blood and sold sixty seconds of alone time with Sarah Newlin in the basement of Fangtasia made me so happy. Sarah got exactly what she deserved.

When we wrapped up Tara’s plotline in the previous episode, I was pissed. All of the True fans felt that something was fishy about her death, only to have it mean nothing at all. The fact that they didn’t show Tara die was so frustrating! The V trip where Tara was trying to communicate with Lettie Mae just turned out to be all about Lettie Mae letting her go. So pointless.

Violet had all of this build up only to be taken out so quickly that I was pining for a little carnage! She could have at least killed Wade! We didn’t care about him anyway!

And that brings me to Bill. We spent so much time focusing on Bill and how he never wanted to be a vampire in the first place. So he basically got what he wanted, right? Ah, except there was all of this “foreshadowing” leading up to the end of his tale, as if he might somehow become human. I was predicting that Sookie’s light was going to somehow turn him human, but instead she never used it. Staked him with a broken shovel handle. Good riddance. 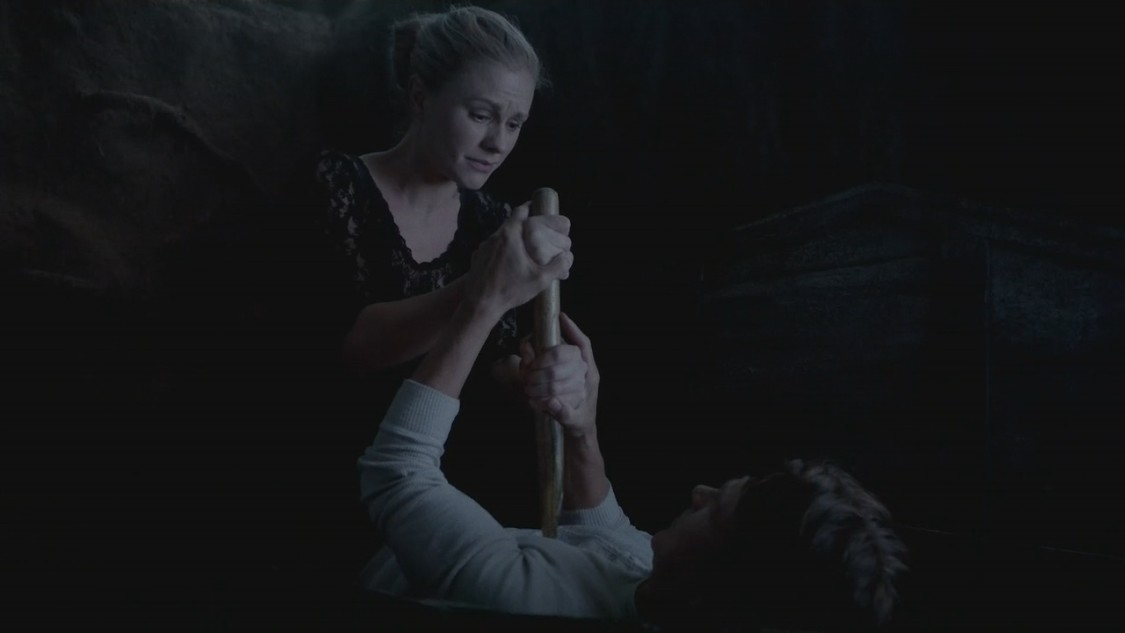 So why did he need her there? Why couldn’t he have crawled into his own grave and done it himself? Instead, he turned Sookie into a killer.

You’d think that somewhere in the next five years Sookie would be messed up, continuing her danger-whore ways. Instead, we were forced into a happy ending where Sookie’s pregnant and everyone lives happily ever after.

So much for being “True to the End.” The final season was not True to the show’s roots at all and I am so disappointed.