Written by Frank Miller, based on his series of graphic novels.

The first Sin City feature, with its slick visual style and slavish devotion to source material, was a visceral thrill when it first came out. After years of endless rumors and false starts, we finally have the sequel. While Sin City: A Dame to Kill For boasts the same interesting visual compositions and many of the characters that were so effortlessly enamoring last time around, something’s missing. Perhaps not striking while the iron was out was a bad move, since the production can’t help but feel like a less interesting companion piece than a full-fledged sequel worthy of recognition on its own merit.

The film more or less follows the same kind of plot structure as the first film: four vignettes loosely connected and told out of sequence. We begin with a short and entertaining scene with Marv (Mickey Rourke) working out a slight case of memory loss while tracking down a bunch of violent college kids. The next story has a hotshot gambler (Joseph Gordon-Levitt) who enters a shady poker game and finds himself way out of his depth. The headlining story of the film follows a Private Investigator (Josh Brolin) who becomes seduced by an old flame (Eva Green) and is quickly drawn into a web of lies and conspiracy. The final, and least interesting, story picks up with the stripper Nancy (Jessica Alba) going after the man she holds responsible for the death of her beloved protector, Hartigan (Bruce Willis, returning here as a ghost, I’m not kidding).

Those who enjoyed the first Sin City will undoubtedly find things to like in A Dame to Kill For as well. Essentially, it’s more of the same, but it’s too much of the same nonetheless. The film becomes drowned in too many familiar characters doing so many familiar things with ultimately less urgency and purpose. Even Mickey Rourke’s return as Marv can’t help but suffer from this series of diminishing returns. Last time around he was a walking, breathing menace, even when everything around him, and sometimes even he himself, was hopelessly, ludicrously over the top. This time, he’s just hopelessly, ludicrously over the top.  That’s the main difference: the first one had a capacity to shock even when it wasn’t taking itself too seriously, however this sequel lacks any sense of surprise to it. 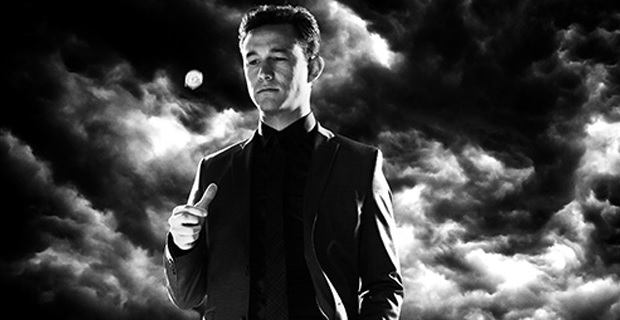 The lone bright spot here is Joseph Gordon-Levitt’s gambler, Johnny, whose story marks the best portion of the film, even if it ends on a horrific anti-climax. I would say that it was good enough to suggest that Sin City: A Dame to Kill For would have been better served by using more original material written specifically for the screen, but then immediately afterward we get the big finale with Jessica Alba’s character. An original creation for this movie as well, the final vignette ends the movie on a serious downturn, as Jessica Alba doesn’t seem to get a good handle on the melodramatic material given to her.

Sin City: A Dame to Kill For is entertaining and passes by quickly enough to warrant a slight recommendation. The stories are a mixed bag, but those in the mood for a good dose of stylized ultra-violence and a small measure of slapstick will not be wholly disappointed.