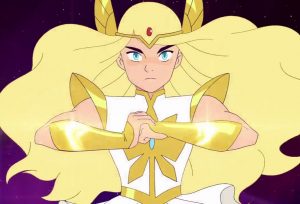 She-Ra Is Much More And Better Than It Appears

She-Ra and the Princesses of Power admittedly was off my radar. Considering its parentage and implied target viewership, I never properly approached it.

But now I’ve watched the first three episodes and am overwhelmingly and positively surprised. She-Ra is not only a good show, but perhaps a great one. It’s a child-friendly epic fantasy. Warring factions and ancient magic and large battles dominate its plot. It has a much closer feel to Avatar than Barbie, with good writing and strong characters. 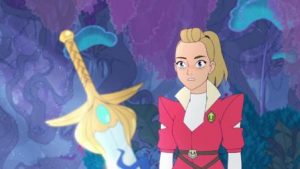 And it’s got a brilliant plotline right from the start. The idea to make Adora (She-Ra’s real name) start as part of the enemy faction is not only great for delivering a lot of exposition naturally but also creates real tangible drama. Her defection is treated with gravitas, as is its results.

But, before I go on, I must address that candy-colored stigma. If you give it a chance, it’s a strength. She-Ra’s world is alien, and the colors are part of that otherworldliness. Things are pink, yes, but organic looking. It reminds me of Middle Earth mixed with The Dark Crystal’s Thra. The Horde’s dark green look further adds visual contrast—and that contrast helps elevate the war scenes. 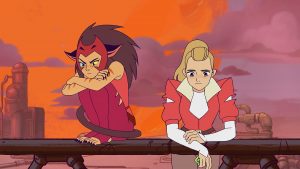 And make no mistake, this is a show about war. They keep it light with childish or comedy moments, but it’s never gone from the tone. Most characters are soldiers, cadets, or otherwise have seen combat. Off-screen deaths are heavily implied. The battles we do see then feel much more dire, even if there’s likely not going to be much true violence shown.

It treats its audience with respect, and I respect the heck out of that.

It’s a rare fantasy series to do this and not lose the sense of fun and adventure and wonder. The plot is, yes, a chosen one narrative, and hits the standard beats in the first few episodes, but so was Avatar. When done right, it can still hold as a great template for awesome stories.

With good writing, deep and charming characters, and a focus on different priorities than a lot of cartoons, She-Ra is instantly notable and recommended for fantasy fans of all ages and genders. 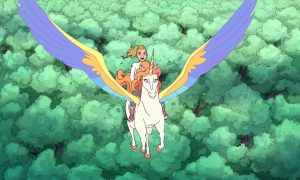