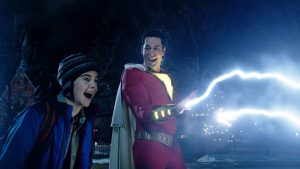 D.C. is improving itself and I want to commend them for that—Shazam! and Wonder Woman were both good films and show that the cinematic superheroes from the other side can be fun and interesting and exciting.

But that doesn’t mean they’ve come close to the heights of Marvel. Shazam! is just a steppingstone on that journey. And, in the broader spectrum of the superhero movie era, it will not be important, but it was a fun film to see.

That said, it also disappointed me. For the first ten minutes or so, I was losing my mind at how good the story was going—the pace, the flow, everything was impressive. There have been so many superhero origin stories now, and we know going into them that we must wait a while for the supernatural stuff to happen, and we must establish character before we can see the fun bits—but it gets a little tedious. So, it’s so refreshing when we don’t have to do so—the newest incarnation of Spider-Man is great for this reason alone—and Shazam!, with its villain, is masterful. A minute of dialogue, and we already understand part of him. It’s blisteringly fast and amazingly effective. The connections to the hero, his motivations, all of it’s clear. 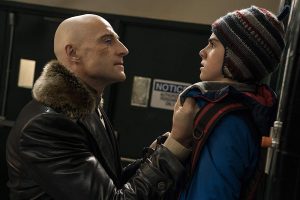 Shazam! Is Crafted Unlike So Many Other Movies

And then we jump to Billy, and, again, the movie has a talent for subverting or correctly short-cutting things so that we don’t have to slog through so much backstory. We get who he is. The first half of this movie is some of the best I’ve seen in a long time and shows a serious understanding of both audience expectations and general pacing.

I say that, and then the movie slogs. And that’s the biggest issue of Shazam! They do such a good job at the beginning establishing characters and motivations and making them all interesting and engaging, and then we spend way too long wandering around in the story. 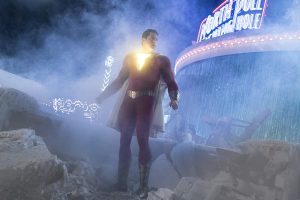 I can’t quite pinpoint where they needed to cut, but there’s no reason for this movie to be as long as it is. Especially when it has the usual issue of D.C. superheroes: being so much a power fantasy and so durable that fights are big and swinging and weighty, but with less impact somehow and thus not interesting to see long stretches of it.

But, how’s the theme? How’s the heart? I already said the characters were endearing—but I didn’t truly get across how good that aspect is. I have no personal experience with foster parents or foster care, but the representation of a new family, not defined by blood, but by simple kindness, is so strong and so positive that I hope it helps some kids going through a tough time. Similarly, and again I don’t have much experience on the matter, I hope Jack Dylan Grazer’s playing of a character with a physical disability, but still showing hopefulness, strength, capability, bravery, emotional intelligence, and being accepted and valued for who he is also acts as a confidence booster for kids who deserve it. 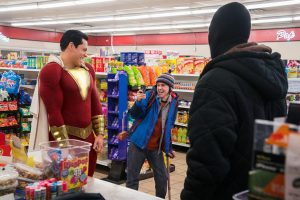 Really, that’s the big aspect to this that I am going to praise—it’s made for kids, but in the best way. The comedy is simple but funny (they threw in the usual meta-humor for people like me, which was appreciated) and Zachary Levi does an incredible performance as a child in a superhero, adult body. Sure, it gets dark at times—someone’s head gets literally bitten off—but they have a story here that’s devoid of the usual cynicism and delivers a power fantasy in a way that allows a lot more kids and a lot more people to feel a connection to the idea of being a hero. To show it as an act of caring, and supporting, and even sharing power and not hoarding it.

I hope that this is a sign of D.C. ushering in an era of better films from them, and this is simply the start of it, but, even if it’s not, it’s still an enjoyable romp that’s positively charged and wholesome.