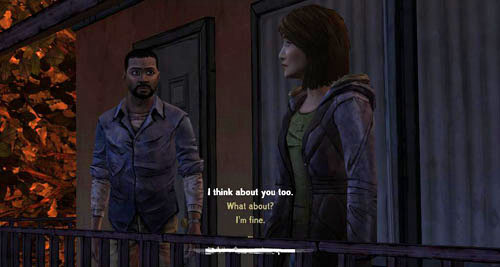 In the realm of science fiction, particularly under the headings of both film and television, it is a widely known fact that when two attractive people/creatures of opposite (or perhaps not-so-opposite) sexes encounter one another, they are likely going to, in many cases, end up tossing off their regalia, spacesuits, etc., in order to have some fun quality time together.

Of course, we are all thrilled to see the handsome, young hero glowing and sweating over the always perfect-haired, sex bomb, at times green female, but let’s think about this for a moment. In situations such as space opera, utopia and other future world scenarios, this is usually okay. However, in the apocalyptic worlds of Fallout, Mad Max, The Book of Eli, Bioshock, Rage, Fallen Earth, Resident Evil, Half-Life or The Walking Dead, it might not be safest of ideas to have, much less actions to take.

Ignoring the fact that humankind is disappearing and everyone is going to die, here are five reasons for which having a sexual relationship in a post-apocalyptic world is probably not going to turn out well. 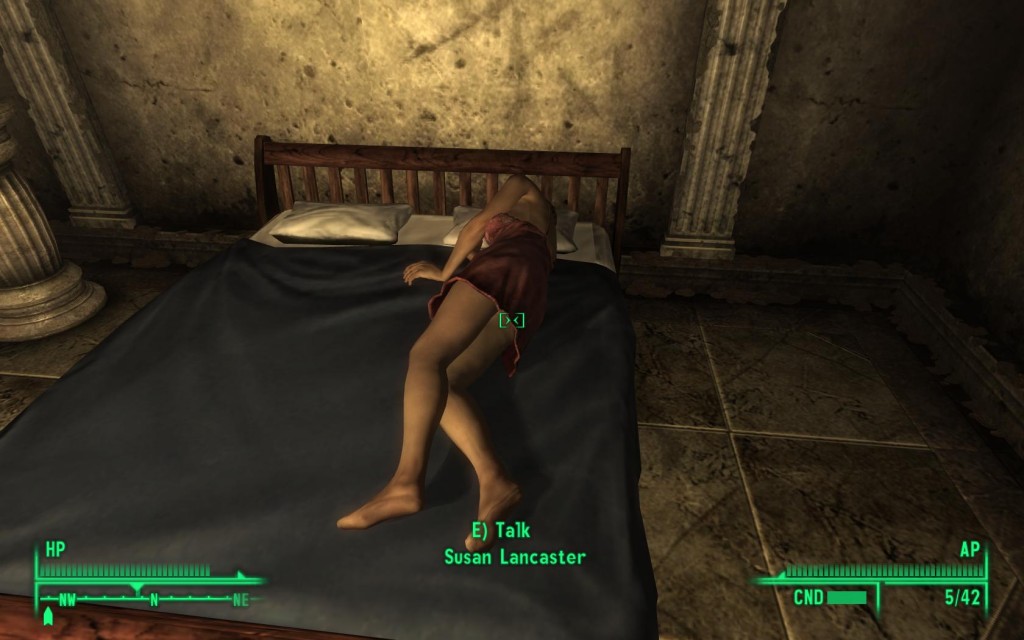 Finding a beauty center after Doomsday will likely be more difficult than actually defeating the alien invaders threatening our existence. Do you really want to go on your first date with that wild and neglected bush in the middle of your legs? The poor hero has the fate of the entire planet or, at the very least, his family and friends to worry about. I’m sure he could do without having to also navigate a maze of shadows.

This point is only made void in situations where aliens are using special weapons of mass destruction designed specifically to cleanse body hair instantly, in which case, is there really a need to stop them?

Mankind is facing a hungry, decomposing, rancid zombie infestation. The last things we need are crab lice entering the mix! In the apocalypse, finding a nice and comfortable bed with clean sheets won’t be easy, candles and some music in the background, so you will have to be to be wiling to scratch your back on some hard, sometimes rocky ground if you want to get some private action. I’m certain that you, after having ripped out a monster’s intestines, do indeed have quite the pair on you, but here we are talking about living, breathing, judgmental people. You’ll want better things to recall about the last time you had sex than the unpleasant smell of your partner, and vice versa.

Okay, okay, protection comes first, but let’s admit it, we are not even sure we are going to survive the night. Are we really going to spend the whole time searching for a condom or instead just enjoy it, simple and clean?  The sexual tension is at its maximum. Having found a moment to do it is already a miracle, so hurry up! And this is the moment in which the scene from Prometheus, were the protagonist had to cut her stomach to take out a bloody little octopus-alien, should pop into your mind and prevent you from doing something really stupid (if they’ve infected our genetic building blocks to that degree). If that isn’t enough, there is also a very high chance that, if you remain pregnant, and such isn’t the case, your son, when born, may be prophesied by some cult as the next Savior of humanity. Do you really want that responsibility thrust upon your son’s shoulders, let alone your own?

Obviously, there are numerous logistical reasons for not having a child in an apocalypse (food shortages, safe haven,  being raised healthily, etc.) which should be taken into consideration as well, you know, all that stuff. 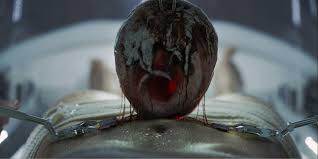 It is always the same old question that had beleaguered the minds of every generation: is he going to stay the night? In the apocalypse, this should be augmented slightly: is he going to stay the night alive? Lots of families, children, old people, women and puppies are already dead. Is it inevitable that, after a burst of young and passionate love, one of the to two partners has to die? In either case, living or deceased, my suggestion is this: don’t get attached. Think of it as a regular one-night stand after a one-dollar beer night.

When you have a sexual relationship with another person and mankind is extinguishing, you have to ask yourself a question: do you really love him, or is he just the last decent man alive on Earth? Of course, if we are in a movie, he is probably going to be super hot, blond and muscular, but even so, are you sure you aren’t both just using each other to fulfill an animal need? Some may say, “Who cares? It’s not like we have the rest of our lives to spend together.” Problems could occur when, after a powerful climax where Mr. Perfect Hero manages to destroy the alien mothership, he expects something a little more. And, let’s face it, you kind of owe him at that point.

And what about a more realistic scenario? What if, when the dead are walking (ah), you’re with a guy purely for sex, and it turns out he’s crazy later? What if he locks you up in a cellar? What if he’s a sadist? What if he’s Joel Rifkin? What then? 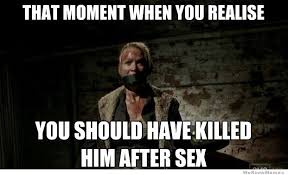