Boy, does Game of Thrones know how to celebrate Father’s Day! Did anyone see this during the season four marathon?

Mance and Jon share a drink together to toast their dead friends, and Mance reveals that they just want to cross the Wall peacefully. Would you want to be in the same woods as those scary-ass White Walkers? Just as he and Jon might be getting somewhere, Stannis shows up and decides to take over.

Did anyone else notice that look between Jon and Melisandre over the flames? I have a theory that she truly believes that Jon Snow is Azor Ahai reborn and has been manipulating Stannis the entire time to get to this point. That look kind of fueled my beliefs.

Let’s talk about Cersei and how she’s seriously going off of the deep end. She looked completely crazed when she told Tywin about Jaime and their inbred children, and she has once again proven that she will go to any lengths necessary to protect them.

Another storyline running with the theme of children, Dany’s dragons are becoming dangerous. I read a review where GRRM admitted that he almost didn’t have real dragons in the series, because he didn’t want very much magic. He did decide to make the dragons completely unrelated to the human species, and I think that last night’s episode proved just that. Dragons are not children, no matter how much they cry out for their mother. 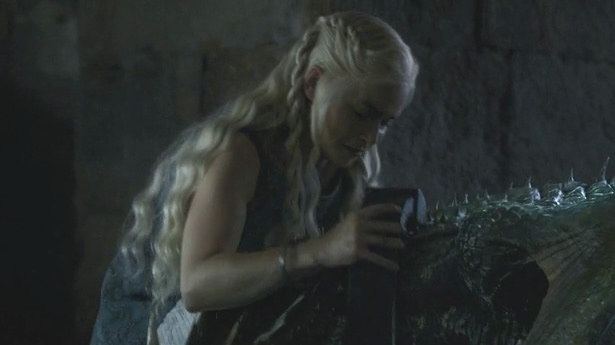 There were very small hints that Brienne and the Hound would cross paths, and I was seriously dreading it (deviations) until we got that great conversation between Arya and Brienne about how girls can fight just as well as boys. Then, of course, my heart sank. When Brienne realizes that the girl she’s speaking to is Arya, it’s as though she would do anything to be able to tell Catelyn that her youngest daughter is alive.

This may very well be one of my favorite fight scenes in Game of Thrones history. Once the swords are tossed aside, Brienne and the Hound enter “street fight mode” and Brienne bites off the Hound’s EAR! (Originally, Brienne bit off Vargo Hoat/Locke’s ear in the books, but this was pretty badass.) 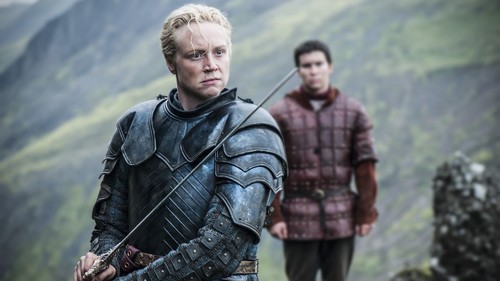 After the Hound is thrown off a cliff, Brienne and Pod begin their search for Arya. I don’t know why they didn’t check on her with the Hound, but that’s Brienne logic for you, I guess.

Now, as much as I enjoyed the Arya and Hound show, their journey had to end. Does Sandor even get a mercy killing? Awe, hell no. I just began rereading the first book, and I just read Arya’s chapter where she was so upset about Micah, the butcher’s boy. The only thing that Ned could do was tell Arya that it was never her fault, that the Hound was the only one to blame.

What’s this? Am I getting teary-eyed over the Hound? As he begs Arya to end his suffering, Arya stares down at him with a newfound independency and leaves him there to die. Now here’s a question that I am not sure of, is the Hound really dead? Another unconfirmed death in the world of Thrones.

Well, Arya’s off to Braavos now, leaving Westeros behind. Let’s talk about Tyrion’s escape and why I yelled at the television.

WARNING: This may potentially be a spoiler for season five, but that is unknown as of yet due to the fact that the show has deviated from the books quite a lot lately. If you do not wish to read it, please scroll down to the “END OF SPOILERS” section.

While, yes, Jaime is supposed to break Tyrion out of his black cell, they were supposed to exchange a few more words. Remember back in the first season, when Bronn, Shae and Tyrion were all playing drinking games? Tyrion admits to having been wed once before, but it was a cruel joke that his brother had played on him. His wife was nothing more than a whore and his rescue had been staged out. Ah, but in the books Jaime finally admits that Tysha was not a whore, that Tyrion had just rescued the fair maiden. Their father, however, objected to Tyrion’s wife and Jaime had played along. This is what puts Tyrion in a senseless rage where he tells Jaime that he did, in fact, kill his bastard son Joffrey, and that Cersei has been a big skank and slept with other men while Jaime was away. 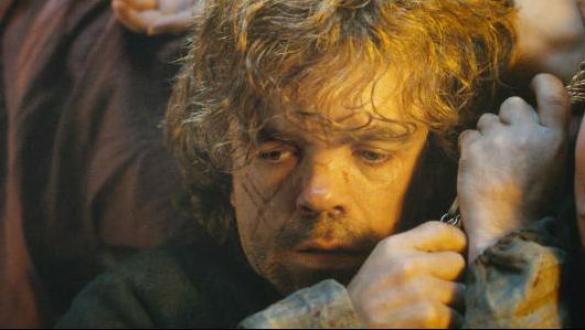 Wondering how Tyrion just so happened to walk into Tywin’s room? Well, the castle is full of secret passageways that may well be the biggest trick to the Spider’s knowledge. Tyrion was supposed to walk into the bedroom from behind the fire place, which is when he discovers Shae on his father’s bed.

He “choked a bitch” and moved on to find his father, to confront him about Tysha. I hated how they made it all about Shae. Tywin Lannister’s last words should have been “wherever whores go.”

The season had so much potential to end on a very dark, very shocking note. I guess we’ll have to wait until season five to see if they bring in that giant spoiler.

Speaking of spoilers, there is this horrible man named George R.R. Martin who enjoys writing novels to spoil the television series for us dedicated viewers. You can now find these spoiler novels at any book retailer. 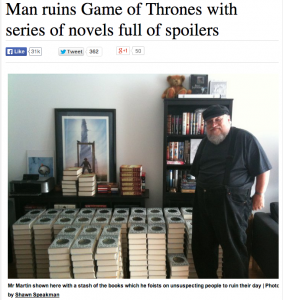