The month of May saw the release of two brand new sci-fi series, The Woods from BOOM! Studios, and Trees from Image comics. Despite the fact that their titles are both woodsy in nature, they are quite dissimilar in plot and the viewpoint from which they introduce their worlds.

The Woods is by a much younger writer, James Tynion IV, and mainly stars a younger cast. It evokes some of the vibes of Lost, throws in what might be a sort of Hunger Games or Survivor set-up, and tops it with the promise of aliens or something. The first issue sees a whole high school disappear from Wisconsin to reappear somewhere that definitely isn’t Earth. The why and wherefore of that transfer is still something that needs to be explained. Issue one ends with a divide in the school as some want to stay in the relative safety of the building, and others, led by the two nominally central protagonists, head out to explore the mysterious forest around them. 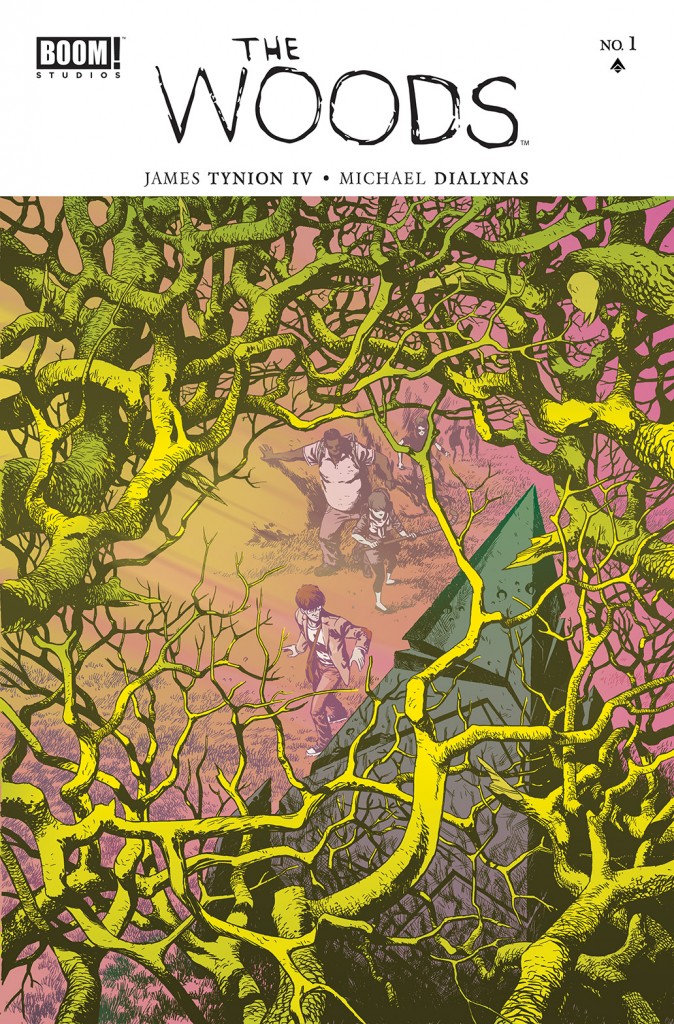 The two characters I think of as the protagonists (in a circle of half a dozen main characters) are Karen Jacobs and Adrian Roth. Both of these characters are the ones who benefit the most from this utter disruption of their lives. Karen, a kind-hearted field hockey player, is an interesting choice of a protagonist in that she is apparently notoriously indecisive. This break with normalcy gives her a new opportunity to act, while simultaneously putting decisions like applying to college on hold. Adrian is the unpopular lone wolf who’s too smart for his own good, and who hasn’t performed well enough in class to get ahead in the regular system. But a challenge like this, which needs smarts and doesn’t take into account class participation scores? He feels like he finally knows what to do. 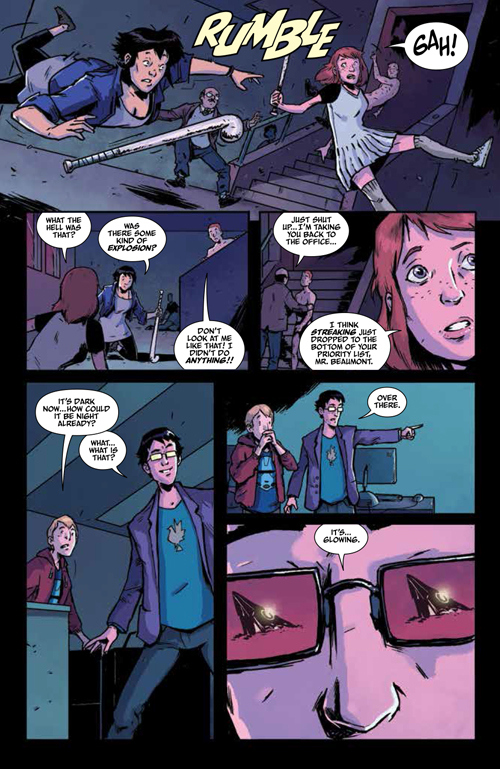 It’s this kind of contained, internal drama that I like about The Woods so far. There is only one locale to explore and there is probably only one powerful outside influence (the one that brought them there in the first place), so if the series is well-written we should get great character development. The question, of course, is how much of that will actually occur. The world-building and discovery aspects of the story will be cool too, but the idea that perhaps a lot of the conflict comes in the form of the characters’ backstories and personalities is exciting. The way the teenagers play off of each other and how they may have to form (and already have formed) strange alliances to deal with this unexpected problem should be fun to see.

Trees, on the other hand, finds its strength in telling a story that is very socially wide and chronologically long in scope. This series is by Warren Ellis, a veteran writer in comics and film, who has the ability to balance a tale this far spread. The first issue starts a whole decade after the towering columns known as Trees start appearing on the Earth. We don’t see any of the world’s initial reaction to them, but rather hear and see it in pieces from narration or various characters. We also get to see how different countries have adapted to these massive columns in their cities and to the toxic waste they occasionally dump on humans. 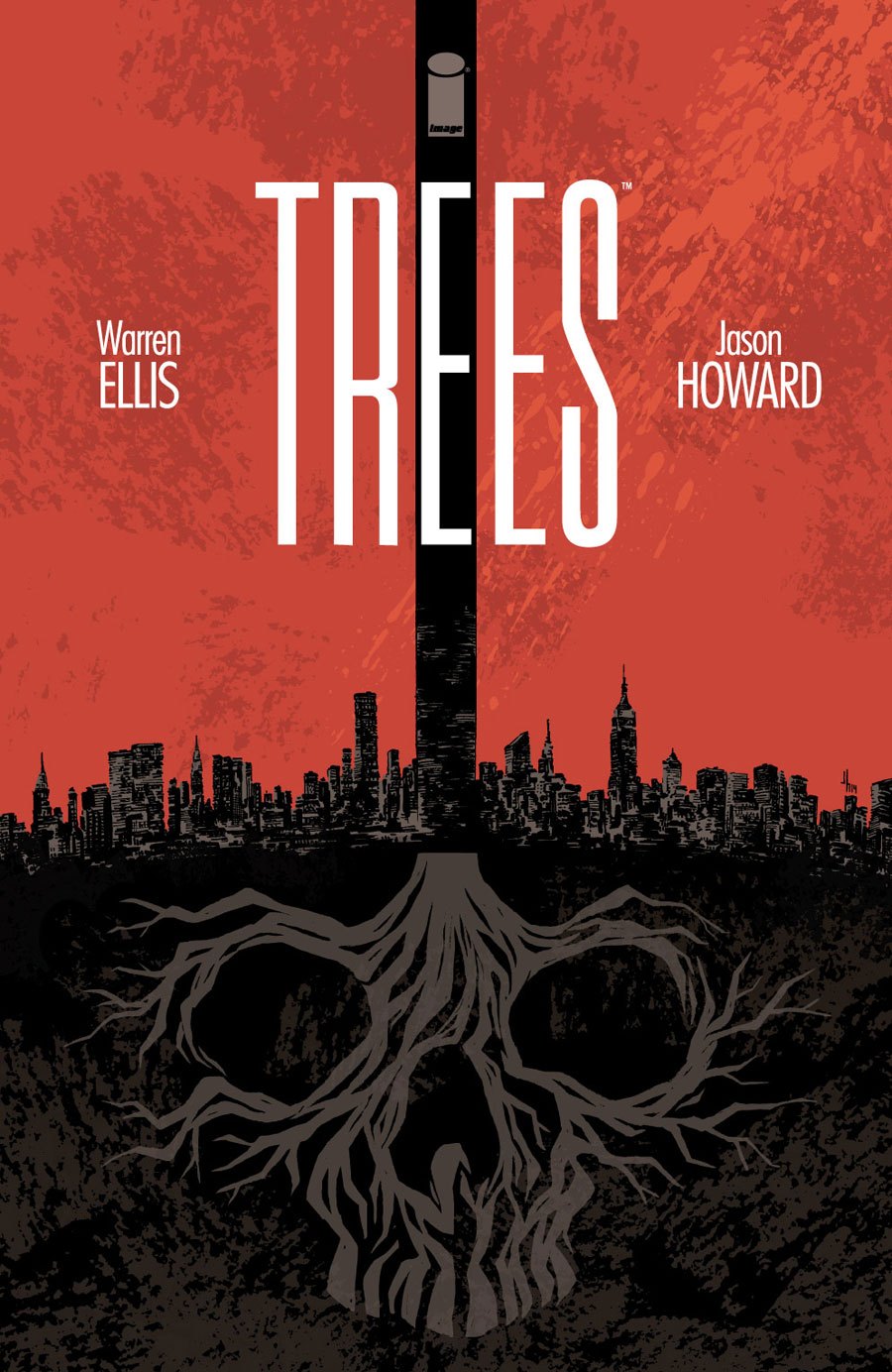 The story looks like it’s going to take place in three places on Earth: what’s left of New York City, a special cultural zone in China, and an archipelago of Norway. Issue one introduces us to a man running for the mayor of NYC, a young artist moving into the city for the first time, and a couple of scientists investigating the Trees. Due to what these characters’ vocations are, their responses to the Trees will be categorically different and offer useful insights on the phenomenon. The characters will likely become more human to the readers as the story goes on, but it will take all of their experiences together to show how humanity can adapt to something like these Trees landing on Earth. The story comes in fragments, and there are pieces of plot that we can grasp already, but this first issue mostly leaves the reader with a lot of tantalizing questions.

Putting together the big picture of Trees is as exciting as the individual stories of the people featured in the comic. This story is one that will pull at larger themes and ask questions about society as a whole. It questions humanity in a more jarring way than The Woods, because in stark contrast to the mysterious power of that comic, which actively reached out to humans, the Trees act like humanity isn’t even there. The Woods implies a value or interest in a bunch of people that we may have a hard time liking at first–demanding of them something that may make them worthy in the end. Trees presents us with people with whom we may have an easier time identifying, or who we find fairly likable, but the Trees eerily overshadow everything they do. 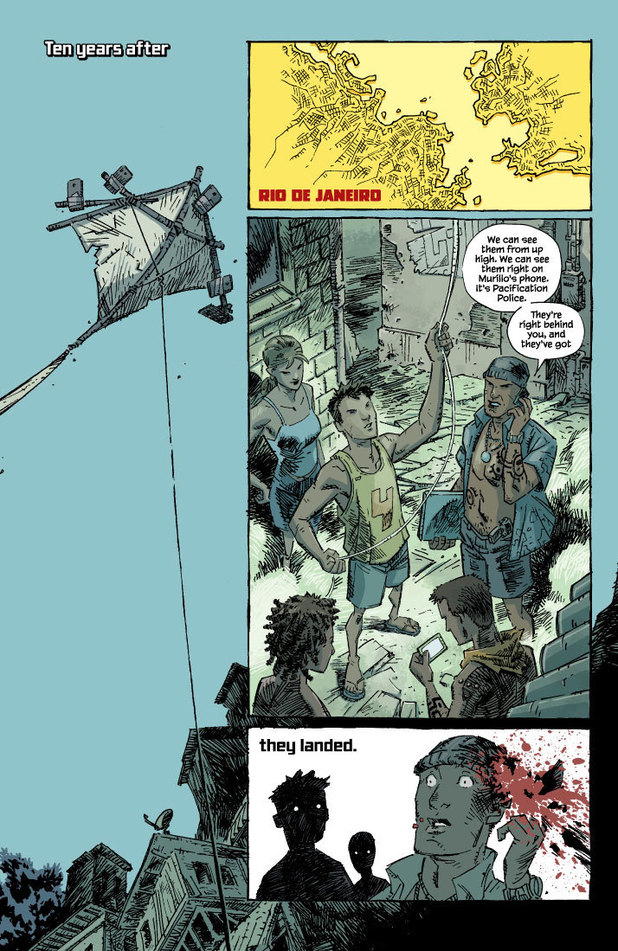 Lines and colors by Jason Howard.

It may be illuminating to read both these series side by side, and I think they both have promise, but if I had to choose just one, I would pick Trees. I like a funnel-type lens on humanity, where one starts with the big picture and moves in. In other words, I like figuring out what the larger elements of society say about people, so a comic that looks at society as a whole dealing with giant alien columns will always come in ahead of one that pits a small group of characters against something. I’m a comics nerd as well, and the art and design aspect of a series holds a fair amount of weight with me. In that department, I find Trees more aesthetically pleasing so far in the designs of the characters and locales. But that’s just an opinion, so take it as you will. If you want an original comic to enjoy this summer, pick up either (or both) The Woods or Trees right at the start of what should be some exciting sci-fi.