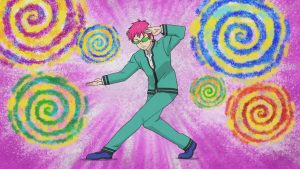 Saiki K Is A Trope In A Different Direction

The Disastrous Life of Saiki K might be the first anime reviewed on this site—at least by me. And, to begin, I’m starting light. Saiki K is a comedy set in the ever-present anime location: high school. It focuses on a wildly powerful psychic boy who’s also sarcastic and anti-social. He’s godlike, honestly, and would make for a boring protagonist in a show that wasn’t a lighthearted comedy focused on putting him in situations where his self-restriction on using his powers leads to hijinks. 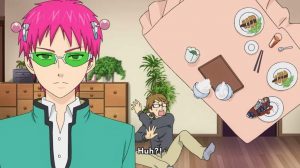 Saiki K Does Not Take Itself Very Seriously At All

Let’s get the usual question out of the way: is it funny? Yes, it’s funny. Not uproarious, but it also has momentum. From the three episodes I’ve watched, I’d recommend binging the show. In a good way, it wears you down until the silliness washes over you.

Like, it’s not serious. It’s not intense. The animation is basic, the characters easy to understand—but it throws all sorts of shenanigans at you and in different ways, so, it’s never boring. The voice actor who plays the main character’s deadpan is often perfect and there’s a long meta-joke in episode two that made my anime loving heart sing. 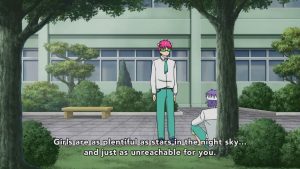 Saiki K Has Snark And Comedy At A Quick Pace

Really, Saiki K is a sitcom for anime fans. It relies on the viewer kind of just knowing the rules of anime, and how it is, and what to expect, and the flow of it—and then has fun in that space. Its breezy writing and snarky tone acts as a nice soothing balm from life’s frustrations. Put it on when you feel like you want to watch “something,” on Netflix, but haven’t quite figured out what that is yet. It won’t blow your mind, of course, but it’s fun and weird and pleasant enough to be enjoyable. 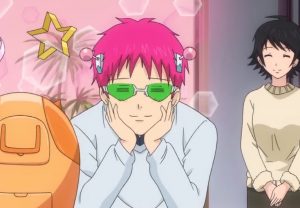