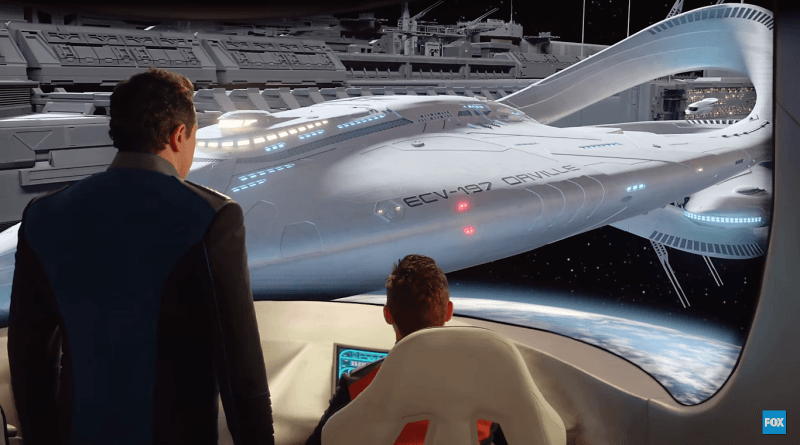 The Orville kicked off it’s two-part premiere last Sunday night and, for me, it was awesome. I really enjoyed it. And apparently, so did a lot of others.

With 89% of Rotten Tomatoes’ audience giving it a thumbs up and FOX having it’s highest ratings in this category in 2 years when streaming is factored in, I’d say The Orville is hugging the donkey. (Watch and you’ll understand).

Thanks to the hurricane, I didn’t get to watch it until Monday on Hulu, (on my tablet in one of the few hotels with power), but even on that tiny screen the excellent graphics, cinematography and production design showed through. 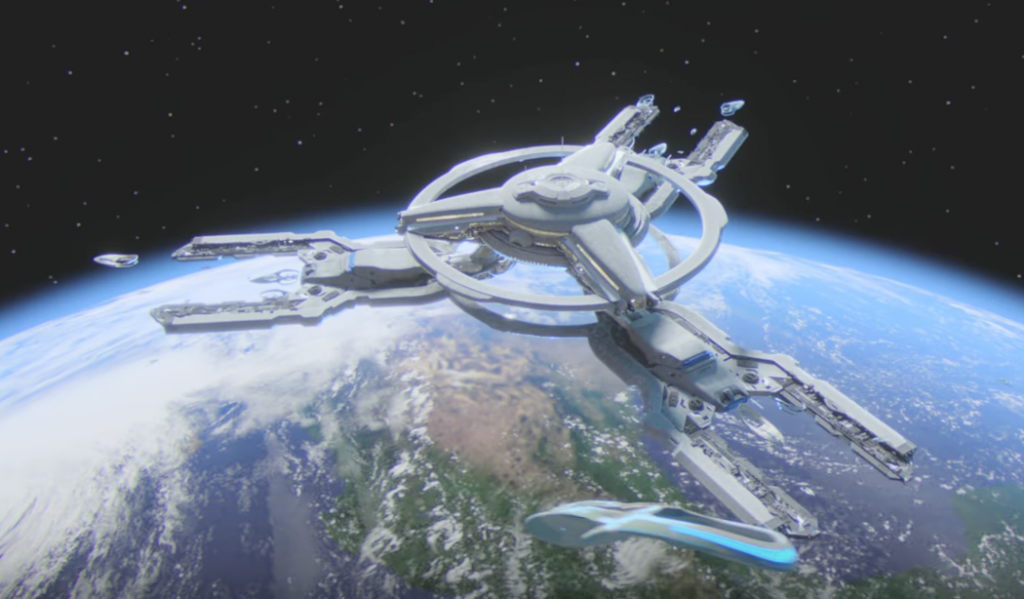 I know there have been some negative reviews, mostly from critics, out there for The Orville. I’m not entirely sure why, but I’ll speculate that:

B. Some are just naturally predisposed to fault finding and so immediately furrow their brows and turn on their cynic meters when “reviewing” anything; and/or,

C. Some are so thoroughly indoctrinated into the “dark, edgy, and dystopian” sci-fi culture that has become so dominant in the last 20 or so years, that they just don’t know what to do with anything light, hopeful or upbeat but to reject it out of hand. That said, The Matrix was heavily panned by critics too.

D. Trek fans criticizing it may be forgetting just how clunky and awkward every first season of every Star Trek series was. Q-awesomeness aside, check out Encounter at Far Point today on Netflix if you need a refresher. And if you loved it, remember that it was 2 hours and you haven’t seen the second hour of The Orville’s premiere.

For me, a serial optimist who loves and respects the role of science fiction in inspiring us to create a better world, I’m all-in on the hopeful, uplifting and aspiration-raising sci-fi that Seth MacFarlane has stated he wants to present with The Orville. In delivering on this, The Orville seems to be off to a good start.

With that said, here’s my review of The Orville. We’ll do a review round-up from around the web shortly.

There were some flaws. The pacing in the edit was a bit slow, possibly due to time, meaning they have to fill the airtime precisely for television so may have needed to extend scenes by a few seconds here and there past the ideal cut point. But I do hope the editing will improve.

Some of the jokes were a little raw, cliché and a bit cheesy, but that kind of thing is totally subjective. I personally prefer “Happy Arbor Day” to “You’ve Got Wood”, as an example – generally a more witty humor as opposed to vulgar humor, which is the direction The Orville tends to lean.  And, P.S. with the popularity of environmentalism these days, who doesn’t know about Arbor Day?

Anyway, there were also a few scenes where the green screen was pretty obvious, even on my tablet. Granted, I do work with video so maybe most people didn’t notice it, but I imagine on a large screen it would have shown even more. 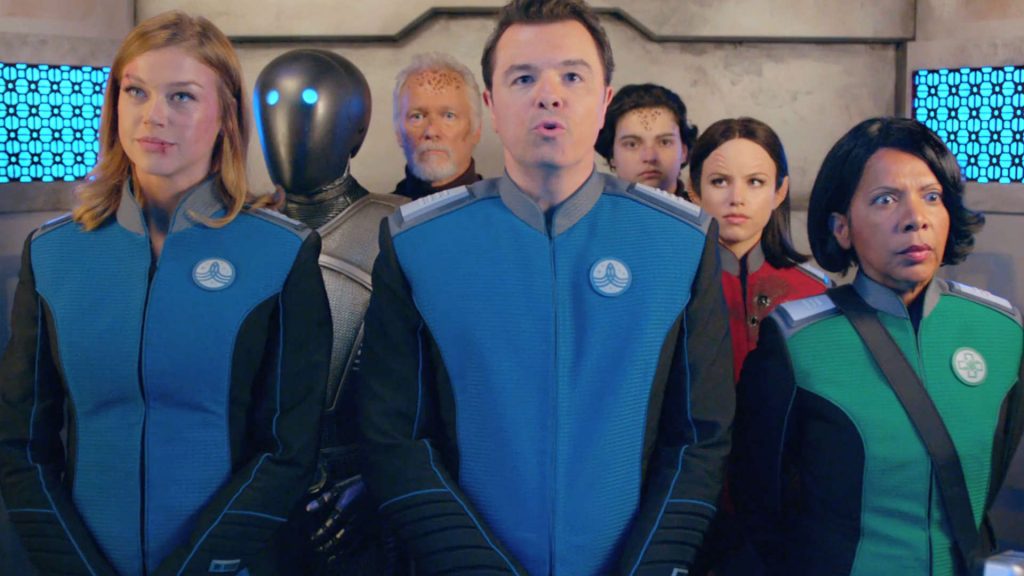 Now, the positives: (There are lots of these).

Seat Belts! – YES! Finally! It was always a pet peeve of mine that the Trek crews didn’t have seat belts. I mean we’ve have seat belts for almost 100 years right now in planes and on the ground and they don’t have them in space in the future? Seriously?

Pockets! – For many decades, it’s been possible to produce form fitting clothing with pockets. Every military uniform in history has had pockets. Why no pockets Trek? Why? The Orville has pockets.

Fresh, Interesting Characters – Though we only get some character development for the top 3 or 4 characters in this episode, (remember, it’s only 44 minutes), all of the characters are interesting and have their own unique personalities and special abilities. I’m very interested to see how they develop. 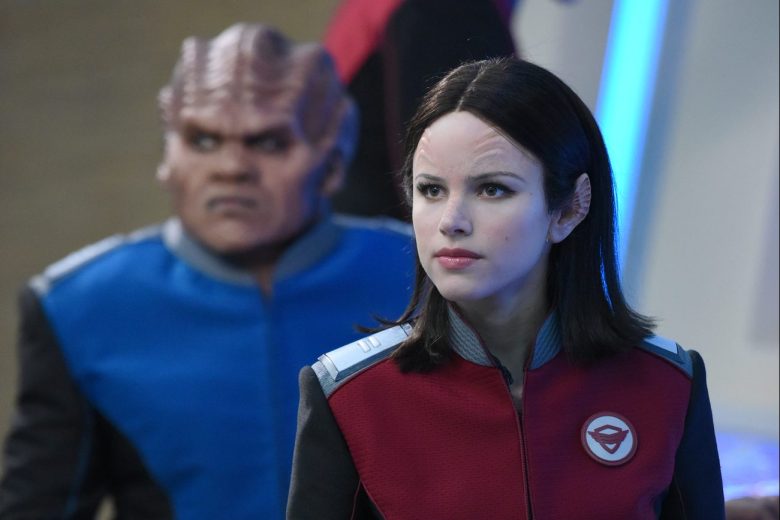 Lighthearted & Refreshing – The lighthearted overall tone of the show is a breath of fresh air in the otherwise dark and brooding sci-fi market that we have today. The Orville accomplishes this and maintains it without seeming to lose the depth and soul of classic sci-fi. Since this is the first episode, the jury is not fully in on this point, but this new tone is refreshing and I look forward to seeing how they’ll build on this. #IWantMyOwnPersonalJustin

Interesting Story – As TV stories and pilots go, I really enjoyed this story. It was a simple episodic story that was well executed. They didn’t try to “blow us away” or “change the game” or  “make a statement” or “insert hyperbole here”. They did exactly what a pilot is supposed to do: 1. Introduce the main characters; 2. Give some character development; 3. Tell a decent story possibly with a twist; 4. Make the audience interested enough to give it another shot. Mission accomplished.

Fun & Funny – Although the humor is a little crude for my personal taste, I definitely appreciate what they’re trying to do. Overall, the show is genuinely fun and I definitely chuckled several times even during repeat viewings. I’ve watched the pilot about 5 times and I think I laughed more on subsequent viewings than I did the first time. Overall I find it to be a happy show. Yes, at last we have a happy show that’s just that. The Orville is fun and happy sprinkled over action and heart and not trying to be anything else. Hooray! 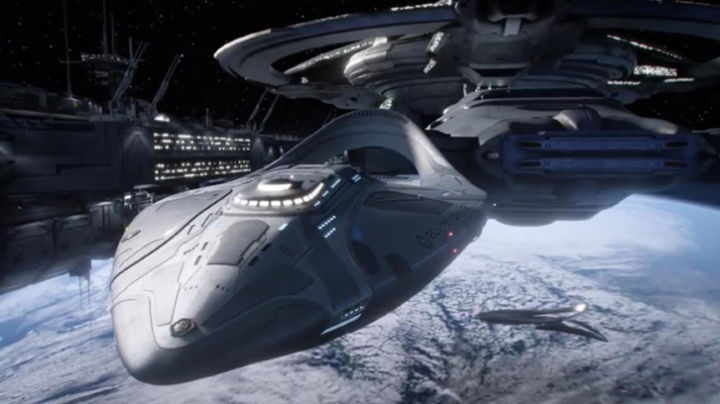 Updated Production Design & Quality – Okay. I have to insert a Discovery reference here. <Begin Rant>Why oh why couldn’t they have designed a ship like this one? Or even like the Kelvin Enterprise? Or the Enterprise Enterprise? Why do we need that dark, lens-flary, backlit, can’t-see-anything, ship? <End of Rant>

Ok. So the ship is gorgeous, but not so gorgeous that it detracts from the light nature or plot of the show. The sets are practical and appropriately aesthetic and, given the lower budgets of network TV shows, the special effects, cinematography and overall production design are excellent. They’ve definitely created a unique brand in the overall production design of the show. 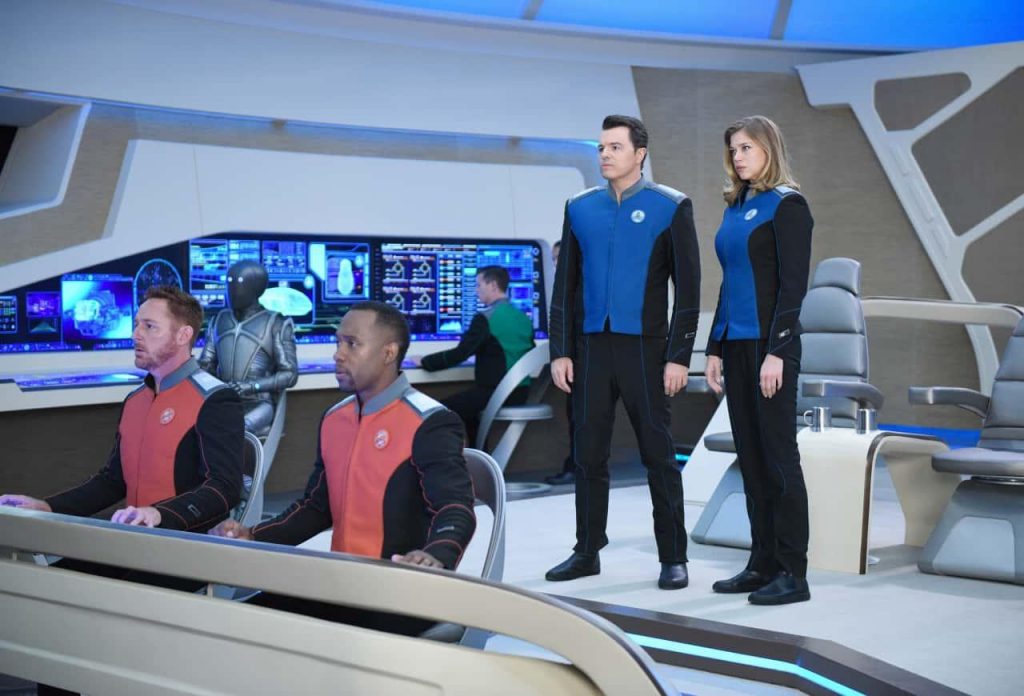 Special Effects – I mentioned these above but they really deserve their own line item. With the exception of one near the conclusion, the special effects are great. They’re using a model for the ship much of the time instead of CG and it shows. The scene when you first see the ship totally captures the wonder, awe and reverence of seeing your ship for the first time. And the space battle scenes? Awesome sauce! Hug that donkey man! Hug it!

Orange, Purple & Green! Oh my! – The uniforms are unique, stylish and colorful while still maintaining a futuristic military look. They’re also reminiscent enough of classic Trek, particularly with their color codes, to be comfortably familiar.  #PurpleIsForAdmirals

Brannon Braga & Jon Favreau – Most of my favorite TNG, Voyager and Enterprise episodes were either written or co-written by Brannon Braga. He’s an incredible writer and is an Exec Producer on The Orville. I’ve either liked or loved pretty much every movie Jon Favreau has made. He’s an Exec Producer on The Orville and directed the pilot episode. I think between these guys and Seth MacFarlane, who clearly loves and gets Trek and sci-fi in general, this show is in great hands and will do well if given the chance. 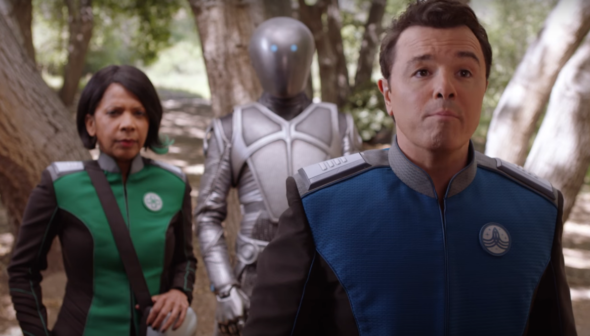 Summary: The Orville is a light, but not too light, sci-fi action dramady, with an interesting cast, a talented and experienced production team, and metric tons of potential.

It’s an updated homage to the spirit of Star Trek and the Gene Roddenberry vision of the future. Given the passion its production team has for sci-fi and the Roddenberry philosophy, the praise it’s received from other Trek alum (Marina Sirtis, Patrick Stewart, Jonathan Frakes and others), it could easily be among our new BSFs (Best Shows Forever) once it finds its footing.

It gives hope, makes us think and makes us laugh while still keeping it real for today. I hope FOX stands behind it, continues to promote it properly and gives it a chance to establish itself.

FOX will stand behind it if we watch and tell our friends to watch. If you haven’t already seen it, catch it now on Hulu and be sure to tune in to FOX tonight, Sunday 9/17 at 8pm for the second part of the premiere. The Orville airs Thursdays at 9PM Eastern/8pm Central on FOX and streams the following day on Hulu. Watch it. Get wood. Hug the donkey.