Captain America: The Winter Soldier has a lot of responsibilities to balance for a superhero action film. It’s a Captain America sequel, an Avengers sequel, and an important building block in the Marvel Cinematic Universe (MCU) Phase Two. With fiery car chases, martial arts duels, and more S.H.I.E.L.D. tech falling from the sky, this film is full of physical conflict. Throw in some intrigue within S.H.I.E.L.D. itself and a mysterious metal-armed assassin, and The Winter Soldier becomes quite the whirlwind of a film. It may stumble a bit in its plot resolution, but all things considered, I think Marvel’s done it again. Because while the film would never garner an Oscar nom, that’s not really the point. What we have is another “Marvel Superhero Film,” and that in itself is a great category in which to score.

Captain America: The Winter Soldier opens at the reflecting pool in Washington D.C. Steve Rogers (Chris Evans) is running around the pool, and repeatedly passing another jogger. After finishing their jogs, Steve introduces himself to the other man, Sam Wilson (Anthony Mackie). Sam, also a military veteran, and Steve hit it off at once. Then Steve gets a text from Natasha Romanoff (Scarlett Johansson) about a mission and the action really gets going.

The film does not give the audience any obvious indication of how much time has passed since the Avengers saved New York. Steve’s relocation to D.C., however, separates him geographically and thematically from the rest of his team. It also indicates the tone that the film aspires to, that of a political spy thriller. Decisions like hiring Robert Redford to play the important figure of Alexander Pierce, and the lack of other superpowered characters anchor this sequel as one of the more realistic Marvel films. The story involves touchstone points like public fear vs. individual freedom, and personal morals in conflict with complicated situations. It also addresses Steve’s further adjustment to the modern world. 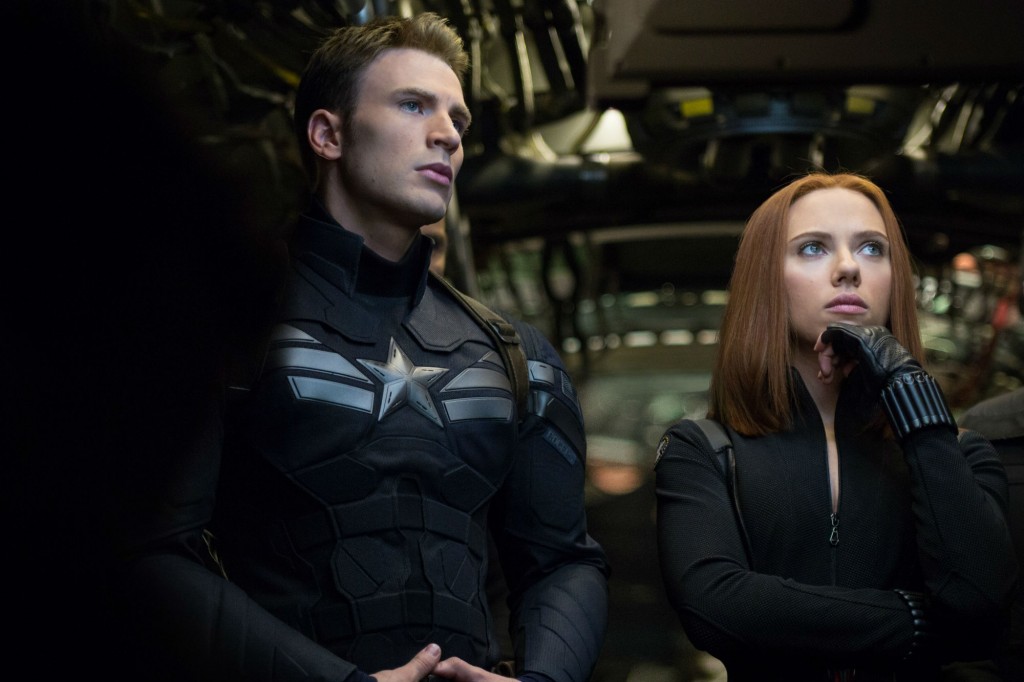 Steve (Chris Evans) and Natasha (Scarlett Johansson) are ready to hit the town, or maybe just hit some bad guys.

Steve’s growth from when Avengers took place is nicely apparent. In the former film, it was okay for Tony Stark to make cracks about his old fashioned way of doing things. In The Winter Soldier, however, he is anything but a joke. Steve comes across as intelligent, resourceful, and disciplined, as well as very curious about his new world. Yes, he is still a bit of a Boy Scout, but he has an appealing mix of strength and charm. Steve never loses our attention despite the explosions and pull of other characters.

The Black Widow, Natasha, also gets some well-deserved screen time. She is with Steve for most of the film and we get a real sense that they are often in each other’s company from the easy way in which they communicate. They clash in many ways, but this means they can balance each other just as often. The film reveals a bit more of her backstory as well, and never treats her as the token female character despite the fact that she essentially is. (Maria Hill shows up but her role is unfairly small.) Perhaps the writers felt there wasn’t time enough for a more significant Widow subplot, but they should have tried for one anyway.

Anthony Mackie turns in a great performance as the Falcon, one which will hopefully earn his character some new fans. Sam is appealingly funny and admirable, and also quite the fighter and flier. His work in helping veterans with PTSD reminds us that Steve is not only a current soldier, but a veteran of one war already. He must be dealing with more than just his lost seventy years. Sam is a comrade to Steve in ways that the other Avengers couldn’t quite be, and his character is a welcome addition to the roster of MCU heroes.

Sam (Anthony Mackie) may be a cool guy on the ground but in the air it’s a different story.

Without revealing too much about the secret of the Winter Soldier, it’s still safe to say that this actor’s performance was one of the better ones. While the Winter Soldier plot was more secondary than I was expecting—there’s a big secret in this film other than that assassin’s identity—it was treated satisfactorily. It’s apparent though, from the way the film ends, that this story arc is far from over. Marvel Studios was not lying when it said that this film is a game-changer for the MCU. The revelations of Captain America: The Winter Soldier will affect all the Avengers and how they relate to their world(s). It remains to be seen how exactly they will do it, but if Marvel handles this properly, there is no going back to the way things were.

The appeal of the Captain America sequel is that it should be as much fun for fans of explosive action films or moderately smart spy dramas as for those more invested in the characters of the Avengers. The film matches its predecessors in thrills, excitement, and humor. True to form, the fight scenes are very impressive, the character development scenes are short but solid, and the film gives us moments in which the audience can laugh with and cheer on the characters. Marvel’s films so far have made the audience feel that these super-people, with powers and suits, are brokenly human as well. Rather than striking a patronizing tone, these stories are such that the audience feels it is truly invited along for the ride. The name drops and hints for hardcore Marvel fans are certainly there, but no major prior knowledge is assumed and the MCU is uncharted territory. In that sense, every fan is equal, and I think that’s something of which Cap himself would definitely approve.