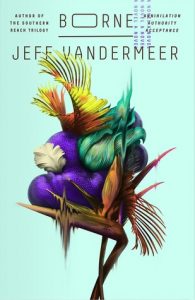 “We all just want to be people, and none of us know what that really means.”

Borne is a novel about growth, understanding differences, and ultimately – human triumph. The novel begins with a woman, Rachel and her friend, Wick struggling to survive in the dystopian wastes from a multitude of enemies outside the safe walls of their home, Balcony Cliffs. There’s the giant Godzilla-like flying biotech bear named Morde. There’s the Magician, a self-proclaimed savior of humanity from Morde. And then there are the minions of each, belonging to the separate factions of either Morde or the Magician.

On a scavenging excursion one day, Rachel finds something. She names this thing “Borne”. Throughout the novel we are left questioning what Borne is and how he exists. Over time, Borne steadily becomes more and more aware. As he learns and adapts at an alarming pace, Rachel is confronted with the question of whether Borne is their newest enemy. And they’ve given him a key to the front door.

I did struggle a bit with the pacing of the novel. The book wasn’t meant to be an action-packed adventure (despite the Godzilla-like flying bear), but instead it kept a steady theme on what it means to be human. As such, there was action to move the story forward but at times it was like whiplash. You were thrown into the deep end of an action scene and struggling to swim to the surface to figure out what happened… and then it was over.

Borne was the most memorable part of this book. His artificial intelligence-esque personality was hilarious at times and heart wrenching at others. Even now, I cannot grasp my mind around what exactly he was meant to look like. Yes, that’s him on the front cover and no, it’s not helping! But I believe this was intentional. Mr. VanderMeer meant for Borne to be in a constant state of visual flux. As a creature, Borne could become anything he wanted. He had certain forms which he reverted back to but ultimately he was a fluid creature. As much as I wanted to have a definitive picture in my mind of what he looked like, that in itself would not have truly been Borne.

This book was an exhausting read. In a good way! At no point as a reader did I feel like I could relax and enjoy the beautifully written prose. No, there was always something to catch or some hidden meaning to latch onto. Similar to how it was for Rachel and Wick, if you let your guard down something may slip under the radar while reading this book.

To whom would I recommend this book?

Sci-fi/dystopian lovers and anyone who enjoys a good “M. Night” Shyamalan-style plot twist. I would not recommend this book if you are seeking a one-shot piece of brain candy. Give this book a read if you need a new sci-fi novel to remind you why the genre exists.