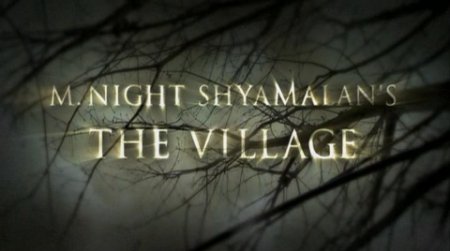 I like The Village. There, I said it. I like it despite the fact it’s become quite the punching bag over the years given its statement on the trajectory of M. Night Shyamalan’s career as the movie that began his downward descent. It has its problems, sure, but I find a lot to like in this moody drama.

The movie is about a nineteenth century village living in begrudging coexistence with monsters populating the woods that surround them. The truce between these two societies dictates that if the villagers abstain from breaching the borders of the woods, the monsters will not harm them. When Lucius Hunt (Joaquin Phoenix) crosses this border, it sets off a chain reaction that leads his love Ivy Walker (Bryce Dallas Howard), a blind woman, into the woods in search of medicine.

The movie is somewhat light on the amount of plot that can be spoken of without giving too much of what happens throughout. It takes a lot of twists and turns that I feel comfortable talking about since the movie came out the better part of a decade ago. My favorite of these has to do with the midpoint of the film, where Adrien Brody’s character, the mentally disabled Noah Percy, stabs Lucius out of jealousy for his impending nuptials with Ivy. This move changes the game for the rest of the film in such a way that proves kind of ballsy, messing with our idea of who the protagonist is while also backing up the overarching themes of the movie, that no matter how much we try to shelter ourselves from the evil that surrounds us, it will find a way to reach you soon enough. With this action, The Village becomes Ivy’s movie and I find her to be a very interesting character with a wonderful performance put on by Bryce Dallas Howard.

By the time the actual “twist” that everyone remembers comes around, it feels like something of a let down. I love the idea behind it and what it says about the movie in context to the time it was made (post-9/11 fears and prejudices), but it is revealed in such a manner that saps the movie of any tension when the climactic showdown comes about, especially on repeat viewings. The whole structure of the movie relies too heavily on its own twist from the very beginning, which isn’t necessarily a bad thing, but the movie buckles under its own weight once the twist is finally revealed due to various holes in the plot.

I began this by stating my overall admiration for the film, and while I do agree the ending goes off the rails somewhat and perhaps could have been done better, there are several things to like about this movie. While the dialogue comes off a little stiff in certain points, I feel the acting is very good. William Hurt, while ultimately a minor character, has several scenes here that lift above the stereotype pertaining to his monosyllabic acting abilities. Joaquin Phoenix is effective too as the taciturn young man who believes he can travel through the woods in search of medicine, a trip that Ivy must take after he gets stabbed in the middle of the movie. Bryce Dallas Howard is excellent as Ivy, as stated above.

This movie boasts some of the best music and cinematography I have seen and, to be honest, it’s the main reason I re-watch the movie (I’ve seen the movie five times since the theater). It is incredibly effective in expressing the mood of the movie. Roger Deakins was the director of photography here and his recent work in Skyfall and Prisoners should be enough of a voucher for the man’s talent, if not merely The Shawshank Redemption.

The Village is an excellent period-piece drama that was overly marketed as a thriller in the vein of Shyamalan’s Signs and The Sixth Sense. It’s a little more like Unbreakable than any of those two blockbusters (Unbreakable is my favorite Shyamalan film). It’s not a bad movie by any stretch of the imagination, just tainted by the filmmaker’s more recent output.