People don’t seem to like it when sequels are filmed back-to-back. For some reason, the result of finishing up a trilogy to a wildly successful film by killing two birds with one stone and filming the remainders all at once just rubs people the wrong way and the results are almost never looked upon as worth the hype. Back To The Future Part II and III didn’t really set the world on fire as much as the first one and the first two sequels to the Pirates of Caribbean film were received with nothing but a sneer even if they were massive worldwide successes (of the four movies listed, I enjoyed all for the most part except for Pirates of the Caribbean: At World’s End, so take for that what you will). It is that company that The Matrix series fits into (for the sake of argument, The Lord of the Rings and Hobbit films don’t fit here because they were all conceived as one and filmed at the same time, whereas the aforementioned films had a successful original film before diving into back-to-back filming for further installments), and with it comes perhaps the most vitriolic response to any additions to a franchise outside of those with the name George Lucas in the credits. The Matrix was a surprise smash-hit of the spring 1999 season. You can debate how original the story was (cobbled together from various sources and dangerously close to having the same plot as Alex Proyas’ 1998 film Dark City), but it cannot be denied that the film stands out as a thrilling exercise in new-aged action aesthetics while being an all-around great film at the same time. The sequels, on the other hand, Reloaded and Revolutions, respectively, have been so heavily reviled that their existence has either gone unnoticed in the ten years since their release or easily dismissed with a simple word or two in judging how bad they were. Were they that bad, though? How did The Wachowskis go so wrong in the eyes of the general public in crafting a successful continuation to their most popular creation? It only takes a few minutes into The Matrix Reloaded to get an idea.

The movie picks up six months after the conclusion of the original film, and a huge ball has been dropped right off the bat. The final scene of The Matrix has Neo talking to an unknown person on the phone, claiming he will prove that “anything is possible.” How do we follow that up? With a relatively ham-fisted standard action movie plot concerning the Machines mounting an invasion on Zion. Doesn’t really fit in with the standard set by the first film’s conclusion. I’m not saying that an invasion of Zion is a bad plot point for the series to take, it’s only that by the time we get this information we have yet to see Zion. It’s hard to make us wholly invested in a movie completely centered on the plight of this city (a problem made plain in that massive battle sequence in Revolutions, but we’ll get to that later). It gets even worse when we get to Zion and what follows is the worst portion of the film. Who would have ever thought a massive orgy in a big budget science fiction film could only be described as boring?

To fully express where this sequel goes wrong, however, I will unfortunately have to compare the first fifteen minutes of it to the first fifteen minutes of one of the best sequels ever made, The Empire Strikes Back. In that film, a sense of dread permeates the opening, the snow-covered planet lending itself well to this atmosphere, as Luke Skywalker is captured by a giant snow monster, Han Solo risks freezing to death in the wintery tundra to go find him, Leia wrestles with how she feels regarding Han’s desires to leave the rebellion, and the Empire is shown in almost omniscient pursuit. Conversely, The Matrix Reloaded has our main characters going to a war council, only to have it broken up by Agents whom Neo beats up handily before flying away. Oh, and he saw Trinity die in a dream, along with Morpheus and Link’s somber conversation where the captain tells a character we’ve never seen before to trust him. Not necessarily conducive to suturing an audience into your story. The movie picks up, sure, but it doesn’t grab you by the throat nearly as well as The Empire Strikes Back does.

The Matrix Reloaded can essentially be summed up very simply: characters pontificate on philosophical debates regarding choice in between elaborate, elegantly choreographed action sequences. It’s all set up and it relies too heavily on its own follow-up to tie up loose ends in a way that almost guarantees audience dissatisfaction with the final product. 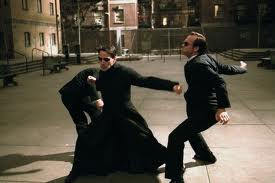 Having said that, I do not believe The Matrix Reloaded is a bad movie, nor the god-awful disaster it and its sequel have been labeled as. I just think they are disappointing follow-ups to a great science-fiction/action movie. The Wachowskis suitably build upon the world of the first film and even offer some surprisingly interesting aspects that frankly are unpredictable, like the fact that, in this movie, myths like Vampires are merely programs that have outlived their usefulness and continue to exist within the Matrix.

It’s a slightly better movie than The Matrix Revolutions, but perhaps that is merely because it raises questions as opposed to being burdened with answering them. I have more to say about The Matrix Revolutions (I have more to say about this movie, too, but if I went into detail I might go on for thousands of words and no one wants to read the ramblings of a madman concerning a relatively average science fiction movie) and will get to that at another time.