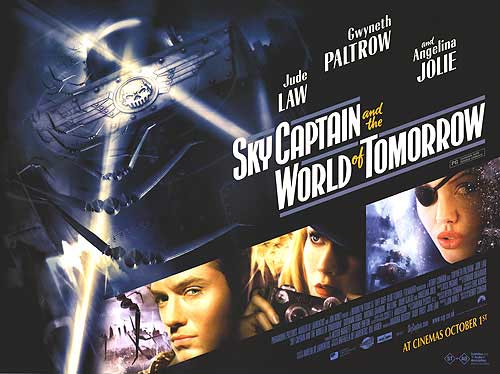 Favoring style over substance has been something of a primary concern for many moviegoers of this generation’s mainstream cinema. When people think of this, their minds (or mine, specifically) usually tend to wander towards something like Transformers, where hundreds of millions of dollars are spent towards making a movie that ultimately feels more like an advertisement for a multitude of products than an actual movie. However, a movie that is made purely for spectacle’s sake is not inherently a bad thing. Sometimes, the best example of innovation in the way films are made can come from a movie that favors its stylistic achievements over anything else. Tron (1982) is an example of this, a movie that I enjoy immensely, one of the first to work extensively with computer animation as a means of achieving its special effects. Now, films that are shot entirely on “digital backlots,” where real actors are blended entirely with post-production environments and effects, have been used in several popular films ranging from 300 to Avatar; but, does anyone remember the very first movie to feature live actors with all computer generated backgrounds? This feat belongs to the 2004 film Sky Captain and the World of Tomorrow.

Inspired by comic book, cartoon serials, and architecture of the late 1930’s, the film stars Gwyneth Paltrow as Polly Perkins, a spunky newspaper reporter who finds herself embroiled in an adventure to save the world from a mad scientist once she is reunited with her former lover, the famed “Sky Captain” Joe Sullivan (Jude Law).

The movie was written and directed by Kerry Conran, his directorial debut. He was very much inspired by the comic books he read as a child along with German Expressionism and the sort of whimsical view of the future that went along with the showcases at the 1939 New York World’s Fair, which deigned to be “Building The World of Tomorrow.” These influences just sparkle on screen, with each shot appearing as though it were ripped straight from some of the propaganda posters from World War II or those old Fleischer Superman cartoons. The movie is a visual marvel, meticulously capturing the style of a fantastical cartoon of the time period and beautifully rendering it into live action. It’s also amazing how well the cast of the film, including Angelina Jolie, Giovanni Ribisi and Michael Gambon, acquits themselves given the fact that almost nothing around them is actually there.

Sky Captain and the World of Tomorrow did not make much of an impression on the general movie-going public, making only $58 million worldwide on a budget of $70 million. That’s quite a shame in my opinion as this is a fairly exciting film that deserves success far more than some other movies using similar filmmaking techniques with bigger budgets and a quarter of the passion that Kerry Conran and producer Jon Avnet put into this movie. Despite its commercial failings, the movie paved the way for future films employing live actors against all digital backgrounds to achieve their stylistic needs. If you ever get a chance to check it out, I recommend it as the rare example where style’s triumph over substance actually works to a film’s advantage.