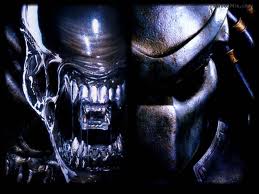 Aliens from the franchise of the same name fighting to the death against Predators from the franchise of the same name was a combination of two of my favorite things. It was the coolest idea for a movie ever in the mind of a Vanilla Coke addled twelve year-old such as myself at the time it came out. On paper, it seemed like it would be the movie equivalent of a chicken potpie, and I surely treated it as such before the movie came out. I even bought the two posters, one with an Alien and one with a Predator on it, and tacked them up to my wall side-by-side very much like the above picture. I was beyond excited.

The movie itself is surprisingly one of the dullest things I’ve ever re-experienced, having not watched it again for the better part of a decade. It amazes me how much they screwed the pooch on this one. My number one pet-peeve with this film has a lot to do with its setting, an underground temple in Antarctica seems nonsensical a place for Predators to come down and test their mettle, given the fact that they are hunters. I understand they want to go with the angle that, in this given situation, it would be more beneficial if the Predators won, but it feels somewhat forced and humanizes them way too much. It’s not only the fact that they probably should have went a different direction (not to say that a story featuring Aliens fighting Predators requires the poetic complexity of a Fitzgerald), it’s that they didn’t even do well with what they had. They kind of went in a better direction in terms of overall story with the sequel, Requiem (which, admittedly, was a far worse movie than this one), but neither of them fully exploited the potential of their premise.