Who: Directed by John McTiernan (director of Die Hard, The Hunt for Red October), starring the scruffy, cigar-chomping Arnold Schwarzenegger, and with award-winning music by Alan Silvestri. (And Shane Black, now known as a director, acted a part as well!)

What: A half-dozen US commandos and a CIA operative head into the South American jungle on an alleged rescue mission that quickly turns into a deadly game of (extraterrestrial) cat and (human) mice.

Where: Filmed in Mexico and set in an unspecific country with lots of jungle to set on fire, a few animals (many fewer than one might think), and a number of somewhat threatening guerrilla soldiers.

When: The year was 1987… In other words, a year before McTiernan’s big hit Die Hard and two years after Rambo: First Blood Part II made fighting in the jungle look like fun. It was also three years after Conan the Destroyer and The Terminator had cemented the bulked up Arnold as a bankable action hero.

Why You Should Watch It: The whole film is a great demonstration of the simple power of situational/dramatic irony. Because the audience knows from the very start that something non-human is in the jungle, and the director feeds us bits of info the characters don’t get, we can enjoy yelling warnings at the oblivious jocks onscreen as they go to their doom. Also, the SFX and the Predator design hold up rather well, all things considered—and there are copious explosions.

Why You Could Maybe Skip It: Like other films of its era and ilk, Predator doesn’t waste much time/money/thought on an overly complicated setup. And while it is sometimes fun getting there, we know exactly where we’re headed in this film. So, if you’re looking for a twist at the end, I wouldn’t want you to get your hopes up. Also, there are way, way too many Y chromosomes in this film. I was simply happy they gave the one female character a name and a backbone. 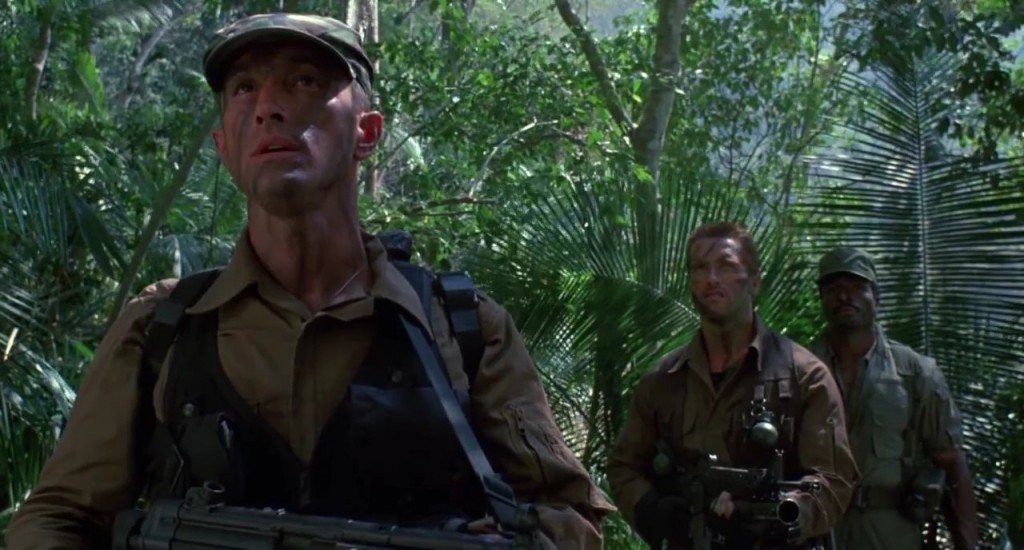 Is it just me or is his expression saying he thinks they’re lost?

A Taste of What You’re in For:
A couple seconds after the main title, we get a never-explained shot of a spaceship letting a smaller ship drop off onto Earth. The next scene is one of a chopper flying over the jungle and landing at a military encampment. Welcome to Camp Too-Manly-for-You, or whatever less accurate name they actually call it by. The rescue team, consisting of a sharp-chinned guy who can speak Spanish, an overly macho cowboy, an allegedly nerdy guy with glasses who tells questionable jokes, a quiet Native American (?) giant, and a no-nonsense African American guy, is led by the red polo shirt-wearing Dutch (Arnold Schwarzenegger). Dutch meets up with Dillon (Carl Weathers), an old pal of his who is now working for the CIA. Dutch could have worked his way up in the ranks like Dillon had he been more willing to do jobs bordering on assassinations but, as he continually says, he isn’t interested in that kind of work. He would rather do rescues, like the one he thinks he has been assigned. 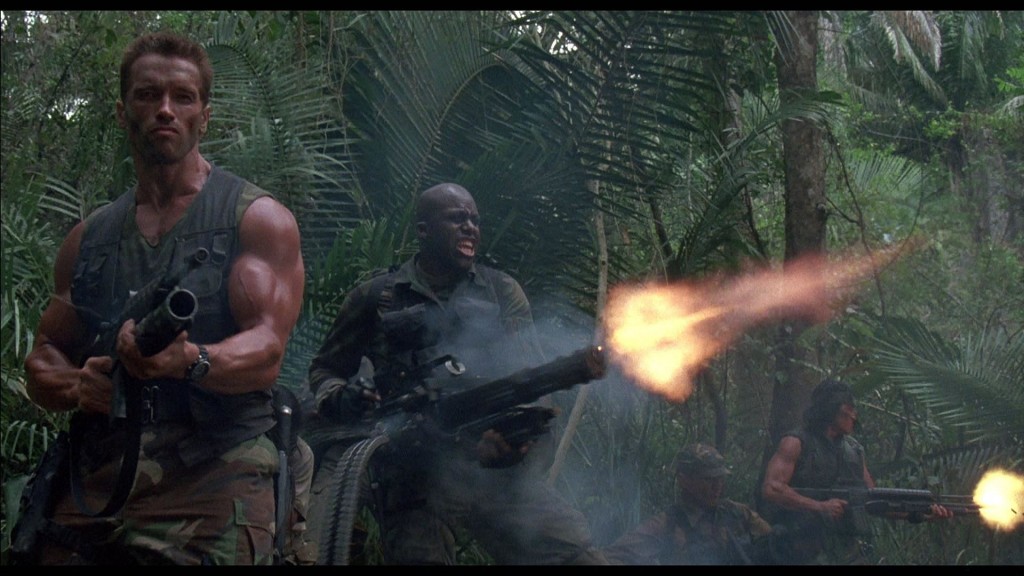 Shoot all the things!

Dillon, keeping everything a bit close to the chest, comes along on the mission. This messes up the flow of the rest of the team, who are all a bit wary of the outsider they deem a glorified pencil pusher. (A really ridiculously muscular pencil pusher though.) Of course, the fact that Dillon didn’t tell Dutch the whole truth about their mission also messes with their collective zen, but you could have guessed that much.

After being dropped off into the jungle, the guys wander a bit and find the crashed helicopter that supposedly belonged to the important person they were sent to find. They find just the dead pilot inside. The men spread out and search for any signs of the guerrilla fighters that occupy the area, and who they think must have taken the others captive. The Native American giant finds some bodies hanging from a tree. The bodies themselves are unidentifiable, as they seem like they have been skinned, but the men find dogtags at the base of the tree. Dutch recognizes a name on one of them, but the man is a Green Beret and should not have been in the party for which they are searching. Dutch confronts Dillon with this but he claims to not know why a bunch of US soldiers might have been in the area as well. Cue lots of scowling. 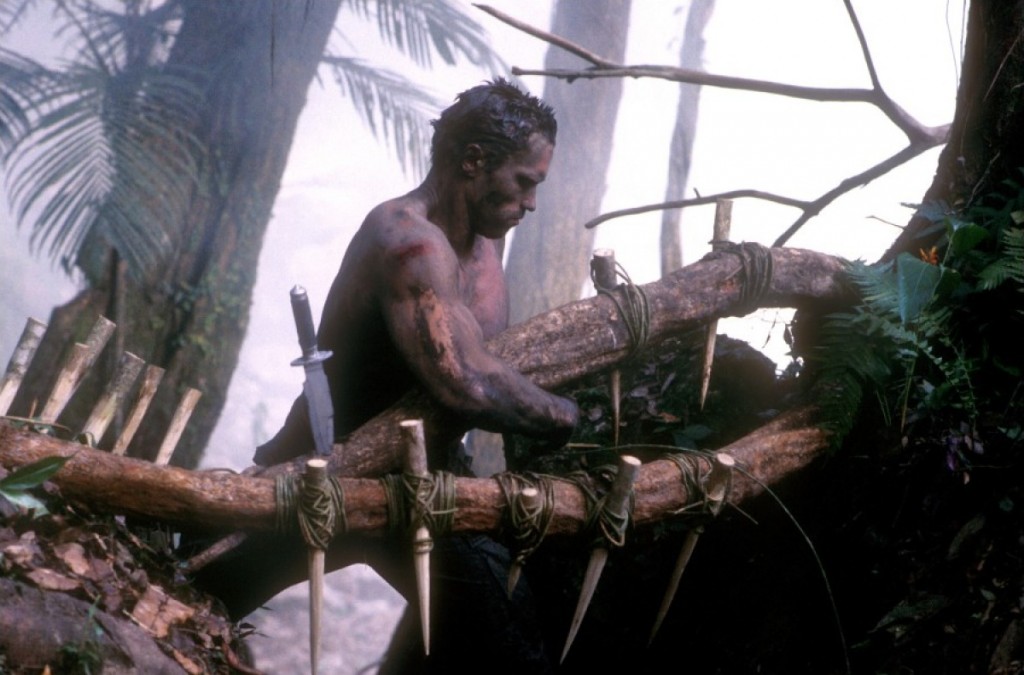 The worse things get, the fewer clothes he needs.

The men are outraged at what they think the guerrilla soldiers have done to their fellow Americans and swear revenge. They head toward where the guerrilla camp should be. Suddenly, there begin to be brief shots from the point of view of an unidentified person who seems to have heat vision. This person is just watching the soldiers below—just watching and waiting for a chance to strike.