What: The third in the Mad Max series about a rough and ready motorcycle cop making his way in a Post-Apocalyptic Australia. Except now, he’s not a cop, there are feral children, and the vehicles only show up way at the end.

Where: Filmed all over Australia, including at spots like Botany Bay and the Blue Mountains in New South Wales. Also, set in Australia. (The consistency is refreshing actually.)

When: Released in 1985 in America, four years after Mad Max: Road Warrior and six after the first Mad Max. As far as speedy sequels go, George Miller had it under control. 1985 was quite the year for American cult films as well. It saw the release of Return of the Living Dead, Back to the Future, The Goonies, Rambo: First Blood Part II, Weird Science, Cocoon, Legend, and others.

Why You Should Watch It: The success of the first two Mad Max films and the market for films like those in the Mad Max series at that time probably explain why the third one is so special effects heavy. There are two whole (small) cities built for the film, and dozens of costumed extras. That desert grunge chic probably wasn’t overly expensive, per se, but I bet it took time to perfect on that many people. They also had to design the Thunderdome arena and the remnants of civilization. All this to say, the production design is pretty interesting on this film.

It also falls neatly into the 80s action adventure genre, so that means (for the most part) it’s easy to follow and doesn’t bog one down with too many unnecessary subplots or quiet character moments. Also, while this film may not manage to pass the Bechdel Test, it has more than one female character. And Tina Turner, with pretty fabulous Ororo Monroe hair, plays the saxophone music-loving, chain mail dress-wearing queen of a raunchy desert town. So that’s a plus.

Aunty and Max survey Bartertown from her treeless tree house.

Why You Could Maybe Skip It: This film is worlds away from the first Mad Max, so if you want to watch a hardcore sci-fi vigilante film don’t pop this one into your totally bogus VHR. Watching Beyond Thunderdome, one may feel like it’s suffering from Return of the Jedi syndrome. The Ewoks have been replaced by youth in various states of desert chic (a.k.a. partial nudity), and there aren’t any spaceships, but one can tell that Hollywood came to call during the planning process.

This film has some great moments of spectacle but it lacks the deeper bits of social commentary and grittiness that the first film was so praised for. And while Gibson plays himself, er his character, well enough, I found myself wondering why this was a Mad Max film and not just a Post-Apocalyptic lone ranger type film. There wasn’t anything about Max’s role that made it seem necessary that it be Max, former hot-shot cop with revenge issues. That being said, it could have been a lot worse.

A Taste of What You’re In For:

The film begins as a crop duster size plane swoops over the desert and harries a robed figure on a wagon. The plane, piloted by a man and his young son, flies in again and the figure falls from the wagon. The pilot jumps out of the plane on the next pass, stealing the wagon. He and his son, now flying the plane, escape. The robed figure runs after them, then slows to a walk behind the wagon as it disappears. The man removes his face covering and is revealed to be our protagonist, Max (Mel Gibson). Max, in what looks like a proto-Braveheart wig, keeps on walking and makes it to the entrance of a ramshackle but bustling encampment known as Bartertown. 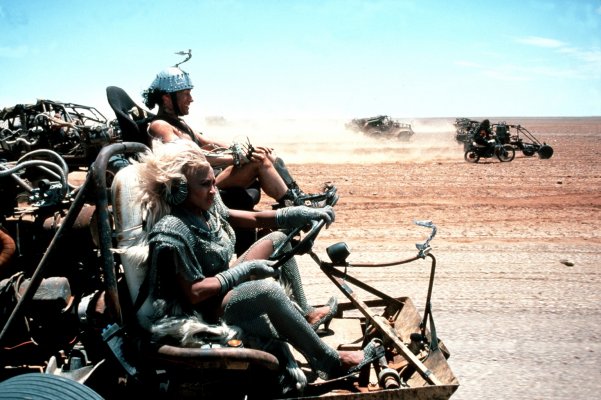 It wouldn’t be a Mad Max film without some reckless driving.

As he waits in line to enter, a man peddles water from a bicycle. Max is tempted to have some, but runs what appears to be a Geiger counter over the man’s wares and turns away disgusted when the man exhibits no shame in selling radioactive water. This is yet another sign of the kind of world Max lives in now.

To get into Bartertown, one must have a reason and something to trade. Max, with nothing much of value and his brusque demands for information on the pilot and his son, is met with hostility. Once he surrenders everything vaguely resembling a weapon, however, he is let in and escorted straight to the leader of Bartertown, Aunty Entity (Tina Turner).

To a sad tune on the saxophone (the music in this film is strange beyond belief), Aunty explains to Max how the atomic apocalypse (which we learn zip about) was the best thing that happened to her. She used to be a nobody in the old world order and now she’s the founder of this town, with a wealth of livestock, water, and food.

All of a sudden, at a signal from Aunty, Max is attacked by her bodyguards. He fights them all off using what’s around him and a small knife he had hidden in his personal flyswatter. He turns to see Aunty holding a small crossbow to his head and smiling. She congratulates him on surviving the audition, and tells him that she needs him to kill someone for her. 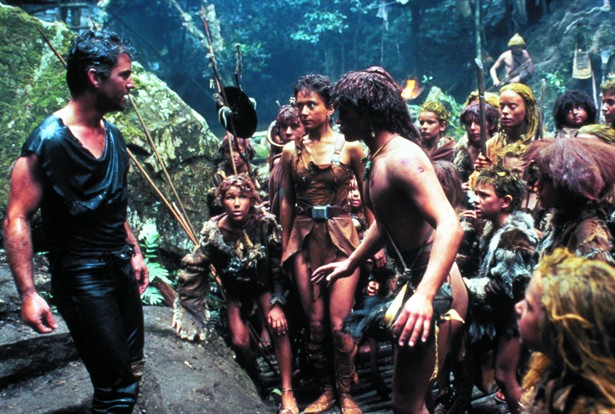 The feral kids are way interested in where he got his leather pants though.

She then reveals that the fuel running all of the lights and machines in Bartertown comes from methane, which in turn comes from the excrement of a bunch of pigs. (I’m not kidding.) The guys who run the methane production, the little one in charge known as Master and the big guard one called Blaster, have this annoying habit of shutting down the fuel to Bartertown if Master is displeased with something. Aunty wants Max to take the entity known together as Master Blaster apart: leave the brains and kill the brawn. She asks that the killing not be traced back to her and offers him in return whatever he needs to escape and continue traveling. Max seems amenable and heads to the methane plant to scope things out. But no matter the era, modern or Post-Apocalyptic, things are not always what they seem…