For Netflix binging purposes, I am here to tell you that Marvel’s Jessica Jones should be top priority.

Thirteen episodes went up on November 20th and already people have been raving about the latest dive into the Marvel Universe. Kristen Ritter stars as Jessica Jones, an alcoholic snark with a lurking need to do good. Jones has a few choice superhuman abilities and when the whole superhero thing didn’t work out she decided to become a private investigator.

Ritter is absolutely excellent. It’s not easy to play the lead who insists that she doesn’t need anyone while swilling enough whiskey to kill the bulkiest of sailors. However, even through her tough exterior, audiences like Jones. She’s abrasive, but it comes from a terrible past and as her story unfolds it breaks your heart and her hard shell. Her PI work leads her back into her darkest days and it will take everything she has not to break completely.

She doesn’t have to do it all alone though. Tagging along is her best friend Trish Walker who means well, but isn’t as equipped as Jones to stand up to the bad guys. But Luke Cage is. Cage, who is getting his own series in 2016, crosses her path and the two are drawn to one another once their similar abilities are discovered. They’ll need all the help they can get because the Big Bad of this story is the absolute worst. 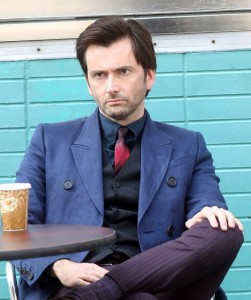 The wonderful David Tennant plays the elusive Kilgrave. His ability could be used for good, but in the hands of a deranged and broken man it’s literally the worst. Kilgrave controls minds. His words are chosen carefully and when he insists upon something happening, it does. This leaves an awful trail of bodies in his wake and its up to Jones to stop it.

The series begins as a slow burn, but once you become invested its a story you won’t be able to peel yourself away from it. Seriously, I watched it all on a Monday. The performances by Ritter and Tennant are what stand out to me the most. Their chemistry feels as real as it is disturbing. Sometimes you feel completely charmed by Tennant and then it occurs to you, “Is Kilgrave in my head?” It’s dark and thoroughly compelling. While it’s in the same realm as Daredevil, Jessica Jones is capable of standing all on her own.

If you enjoyed Carly’s private investigation, you can find the rest of her work right HERE on Sci-Fi Bloggers. You can also follow her on Twitter @MrsCarlyRodgers.