Prodigy: A New Twist On A Classic Setup

Prodigy proves you need not change much from a standard plot idea to do something special: one major deviation will do the trick.

For instance, what if the murderous genius kept in containment was only a little girl?

Now, I know the knee-jerk concern, but, rest assured, the child acting is fantastic. She’s the best part of the movie. On two separate occasions, Savannah Liles comes off as genuinely threatening. Prodigy is not horror, it is not scary, but it is sometimes unnerving—because of her performance.

In fact, her performance holds the whole story together. Prodigy is a tale of two broken people in one room, attempting to understand each other. One doing so to destroy, one to heal. Sure, there are other characters—with some minor depth to them—but it ultimately comes down to the duo’s interplay.

It comes down to mind games.

Prodigy Is Not Quite What You Assume It Would Be

However, with the cultural shorthand Prodigy uses to set up that mental competition, some may accuse the film of being a collection of clichés. To those detractors, I’d say you are mislabeling what are clearly tropes. The film has a quirky psychologist who’s “better than all the rest” and a “little psychic girl” lifted from a horror video game.

And, sure, those are well-worn tropes—but delivery is what matters.

Whether that be in presentation or dialogue.

And it’s that second one where Prodigy has a slight misstep. I had my misgivings when characters started talking; there’s a stilted oddness to dialogue. The dopiness of our main man and the obviously Sherlockian, exceptionally high vocabulary, pretentious overcompensation of the little girl antagonist both stood in that problematic area of “trying too hard dialogue.”

But it goes away. Warps.

It may have still been there—but becomes contextually justified. The little murderer slowly sells she is playing a game, and one with layers. Her big words and haughty demeanor both prove not a trick or a show—but real, tangible. 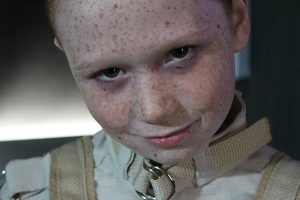 Like Many Films, Prodigy‘s Villain Is The Best Part Of Its Cast

As with many films, characters are the backbone of Prodigy. The focus. Which is good: the sets are small, limited to only a few locations. The camera only does trickery a few times—though it is fun when they happen. In one regard, however, the production values are excellent. I mentioned psychic powers, and though the effects have a few moments of slight awkwardness, there’s a moment so smooth and so masterfully controlled that I flinched. A little girl levitating a pen was more threatening than some supervillains manage in entire movies.

If it seems like I’m flip-flopping, I guess I am. I’m mixed but certainly positive. There are bits, there are bops, some issues—but they’re all in the periphery. I mean this as the highest of compliments: it’s a film of two people, sitting in a room, talking. A mind game that grows in layers. Sure, chess is a bog-standard representation of a battle of minds, but it’s overused for a good reason, and two players playing an intricate game of chess is exactly what we are seeing in Prodigy.

I’ll forgive all its flaws, and write my praise because it did something necessary, something a movie should do: made an audience think. It told more of a story by treating the viewer as smart enough to get the implications.

Like the main character, we need not read the file. The movie gets across information, important revelations, with barely a spoken word required.

Which is a prodigious filmmaking skill indeed. 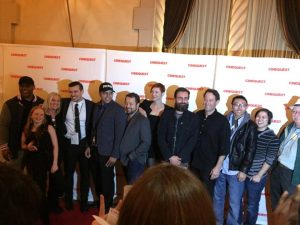 Are you a prodigy of social media?