There are many problems facing newcomers to superhero comics, but one of the biggest may be where on Earth does one start reading, or rather on which Earth? DC’s New 52 and the Marvel NOW line are just the latest in many a series featuring Infinite Earths and Ultimate Universes. It’s been going on for quite a few years, but it seems to be getting more complicated. The idea of multiple worlds in comics is probably related to the theory of parallel universes in actual science, but it’s not quite the same concept. And while it may be a bit late to blame the philosophers themselves, I think Postmodernism definitely had a hand in these all these crazy multiverses. 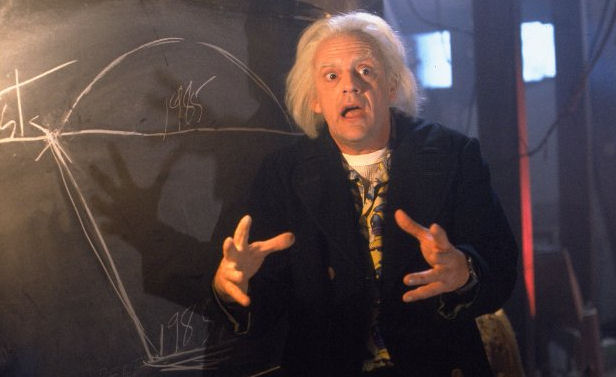 Doc is lucky there were only two timelines to deal with.

The concepts of Postmodernism are nothing if not difficult to define. So let’s turn to Dr. Emmett Brown of Robert Zemeckis’ Back to the Future for some help. The Doc does a great job of explaining time travel as it works for him and Marty McFly in Back to the Future II with just that old chalkboard. He draws one line for their original timeline, and then draws another branching off it to form a parallel path. This second line is the alternate 1985 in which everything is awful.

Doc explains that reversing their direction in Awful 1985 will not solve their problem because they are stuck solidly on that specific timeline. They have hopped from one to the other and have no way of directly returning to the first timeline. In fact, that former timeline essentially does not exist to them anymore. One timeline cancels out the other because they experienced it in their personal chronologies later. A day spent in Awful 1985 means no going back to Normal 1985. Make sense?

Okay, let’s take this further. So let’s say we agree with Doc’s theory and now let’s treat worlds as timelines. If this were the case, then if Batman hopped from DC’s Earth One over to a hypothetical Earth Two (the pre-existence for which we have no explanation, sorry), Earth One would essentially cease to exist. Batman’s movement from one to the other would be considered forward progress—like when Marty exists for a day in Awful 1985. In the traditional manner of thinking, philosophically and theologically, time, and thus all of history, moves in one direction. We assume that civilization is always going forward.

I know the analogy isn’t completely accurate; worlds are not the same as timelines. But it demonstrates the old philosophy fairly well, which is to say that there is one timeline or world, and it is the one in which we currently abide. The existence of something else in parallel seems impossible, because how would we be moving forward if reality were also moving diagonally or sideways?

Then along came Nietzsche and said that we aren’t moving through stages, we are always repeating modernity. History isn’t linear, it’s cyclical. We are always redoing history in the sense that what we perceive as the present is always new. But at the same time, it could technically be repetition of what has happened before, because the real and the apparent world are no longer distinct. Both real and apparent have been replaced with symbolism, said Nietzsche, so we can’t separate them anymore (e.g. if one were to spend money one can’t see or physically hold by using one’s credit card).

Another philosopher, Jean-Francois Lyotard, said that the loss of meaning that accompanies Postmodernism is demonstrated by the breaking of narrative. If the difference between the real and the unreal is no longer recognizable, then that means that knowledge is no longer considered a progressive pattern of one thing then another. In other words, knowledge, and how we comprehend it, doesn’t work as a narrative. According to Postmodernism, reality should be depicted in ways that aren’t purely exclusive and progressive.

So I wonder what Nietzsche would think of the concept of the “ret-con.” He would probably like it as much as I find it annoying. The ret-con, its name derived from retroactive continuity, is a move used by some comics writers to ensure that writing something now won’t be discounted because of something that was written in the past. Therefore, in many superhero comics, the past does not necessarily dictate the future. Some stories are not progressive in the traditional sense: sometimes forward motion comes from an alteration of the past. And all those alternate universes? These are deemed perfectly okay if the readers can grasp the concept that there can be more than one sort of present, more than one sort of reality. And this seems to be a concept our brains can handle well enough on the basic level.

In the end, I don’t know whether I like the way Postmodern thought has influenced comics. On the one hand, playing with multiple worlds can be really fun. The freedom to explore the “What if…?” scenarios and the alternate histories is part of what keeps comics exciting. In many ways they are supposed to be better than or different from the reality we experience day to day. But on the other hand, the comics industry seems to have abandoned progressive narrative in favor of restarting the story every time they reach a point that requires a difficult (potentially financially risky) decision, and that proves frustrating to both those who hope to see cause-and-effect retain its value, and to those who really just want there to only be one First Issue rather than half a dozen.