With the way “Seance” ended, it was a relief to see “Resurrection” pick up with Victor Frankenstein’s storyline once more. The episode opens with a brief flashback to Victor’s childhood, confirming the fact that Penny Dreadful is all about reenforcing the Victorian concept of consumption (tuberculosis) as the “romantic disease.” Young Victor, already engrossed in the Romantic poets, comes across the rotting corpse of his dog and tries to reconcile his literary concepts of death and the reality of it. His mother falls ill with consumption as well and he becomes obsessed with the workings of the human anatomy. 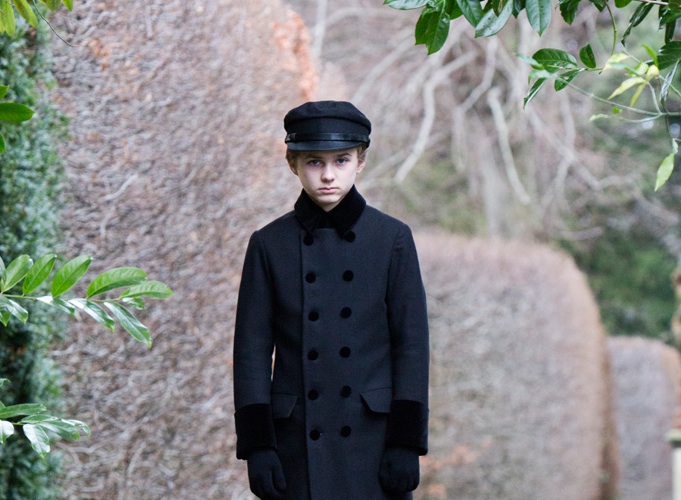 Young Victor at his mother’s funeral.

Just to jog your memory, the second episode ended with a horrific moment when someone killed Victor’s creation, Proteus, right in front of him. That person is, as it turns out, Victor’s first experiment, the powerful creature of Mary Shelley’s Frankenstein. He has come back to find his maker and extract a sort of justice from him. (It is unclear how much time has passed between when Victor made this first Creature and the creation of Proteus.) The Creature explains how he survived after Victor’s abandonment (lots of classical reading), and how he experienced humanity’s cruelty and kindness upon embarking into the greater world to find Victor.

The Creature was helped by an old man who worked at the Grand Guignol and became a stage hand, helping from the shadows. (Historically, the Grand Guignol was in Paris. This doesn’t appear to be obvious in the show.) While at the theatre, the Creature was known as Caliban, and did his work well.  Not everyone accepted him, of course, and there were hints of a sort of Phantom of the Opera-esque confrontation potentially leading to the Creature coming to London.

Meanwhile, Vanessa is visited by an apparition that looks like Mina. Mina implores her for aid and says that many beasts are surrounding her. Vanessa and Sir Malcolm plan some sort of excursion to where they think she may be. Down by the waterfront, Ethan and Brona are getting along quite intimately. Ethan learns, however, that she has consumption and that she cannot afford any sort of treatment. This gives him a reason to want to work with Sir Malcolm again, and he heads there straightaway.

The Creature finishes telling his story to Victor. Victor is apologetic for abandoning the Creature, but is still distraught over Proteus’ death and says that he cannot have any affection for his first creation. The Creature scoffs at this and says he doesn’t want anything from Victor except what only he can make for him: a companion. The Creature demands that Victor make a female version of himself, otherwise he will kill everyone Victor cares for and even take Victor’s life. Then, the Creature disappears. 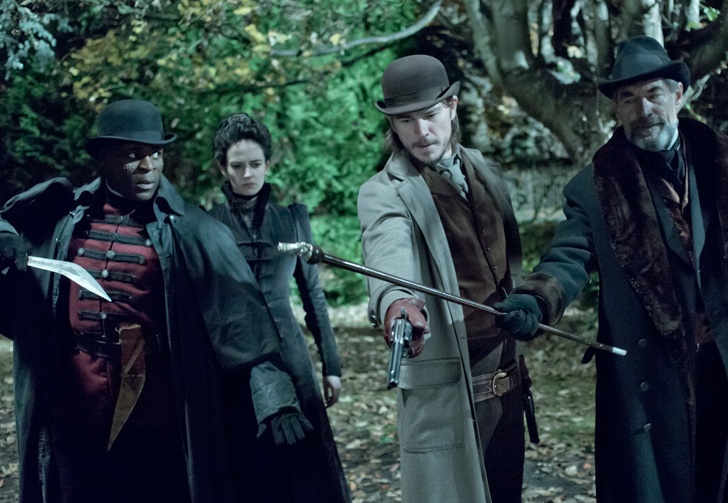 This trip to the zoo was not a walk in the park at all.

Sir Malcolm, Vanessa, Sembene (Sir Malcolm’s manservant), and Ethan then venture into the London Zoo—because this location has the most animals in London and Sir Malcolm says Mina could be here. In the dark zoo, the four run into some aggressive wolves. Rather than shooting them though, Ethan puts away his guns and reaches out to the leader of them. The wolf, growling all the while, takes his hand in its jaws but does not harm him. Then, the wolves run off. While they look around the zoo, Vanessa finds a young man eating animals. He leaps to attack her but Ethan saves her, and prepares to kill the boy. Sir Malcolm demands they capture him instead.

A visibly shaken Victor is heading back to his apartment when he is intercepted by Sembene and taken to Sir Malcolm’s house. The captured young man tells Sir Malcolm that his master is powerful, and mentions the Egyptian gods that they read about in the hieroglyphics on the other dead body they found. But he won’t tell them anything about Mina. Sir Malcolm is prepared to torture the infected boy for information, but Ethan stops him, and upon the arrival of Victor, they convene upstairs to discuss the situation. 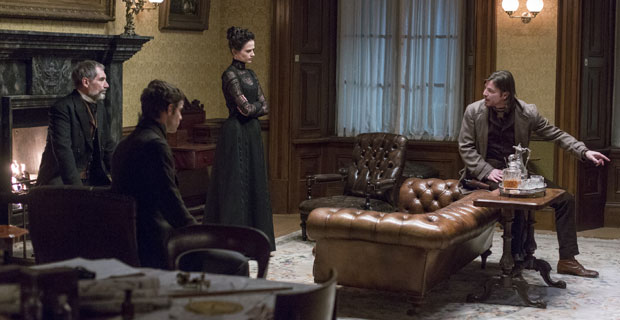 Plotting out the next steps in tracking a still unknown creature.

Sir Malcolm and Victor see the young man chained up in the basement as an opportunity to figure out what exactly they are dealing with. Ethan expresses doubts that this is entirely moral, but he is cut off by Vanessa who states that the losses they have suffered make this a hard necessity. Ethan does not seem pleased, but he swears along with the others that they will follow through on this quest of theirs no matter what it takes. After they have all agreed, Vanessa asks Sir Malcolm outright if he is hiding something from her and the others. He admits that he thinks the man/creature that took Mina, may have really been after Vanessa, but he knows no more than that.

Alone with Vanessa in a quiet moment, Ethan tells her about Brona. She expresses slight sympathy, but one gets the feeling that she still finds him naive. After he asks again, she tells him about Mina: she was to marry Jonathan Harker but then fell under the influence of a terrible man (or creature) and now hovers between this world and the next. As Victor leaves, he expresses his solidarity with Sir Malcolm on the need to figure out the disease or infection they are dealing with. But he also warns that after whatever they do to the captured young man—whether he is healed or it all goes wrong—they will be responsible for him.