Battling Boy is a small, colorful volume put out by publisher First Second, and written and drawn by Paul Pope. It takes place mainly in the wrecked city of Arcopolis, and stars the eponymous youth known as Battling Boy (or simply Boy). Put simply, if Thor came to an alternate history, early twentieth century earth as a twelve-year-old with a collection of animal totem t-shirts, this is what it would be like. Maybe.

When people talk about Battling Boy, the two words to pop up the most in the conversation are “energetic” and “meta.” Usually energetic applies to the artwork, whereas meta applies to the story. This isn’t a mistake. First, Pope’s art is gold. His character design is so great that I can recall every character I saw even if I can’t remember their names. I also rarely felt like any of the characters were standing still—quite the feat in this medium—except when he wanted to express stillness. And even then there was a breeze playing with the particular character’s hair. The whole environment, and its “science heroes,” is also refreshingly difficult to categorize. It’s sort of Jules Verne mixed with the early 1930s, with pilots in leather caps and goggles, radios and scratchy gray TVs, and weapons that look like they were dropped by Flash Gordon. The various monsters and the  world from which Battling Boy came are respectively French bande dessinee nightmare and a sort of early Jack Kirby. The more one looks, the more one finds. 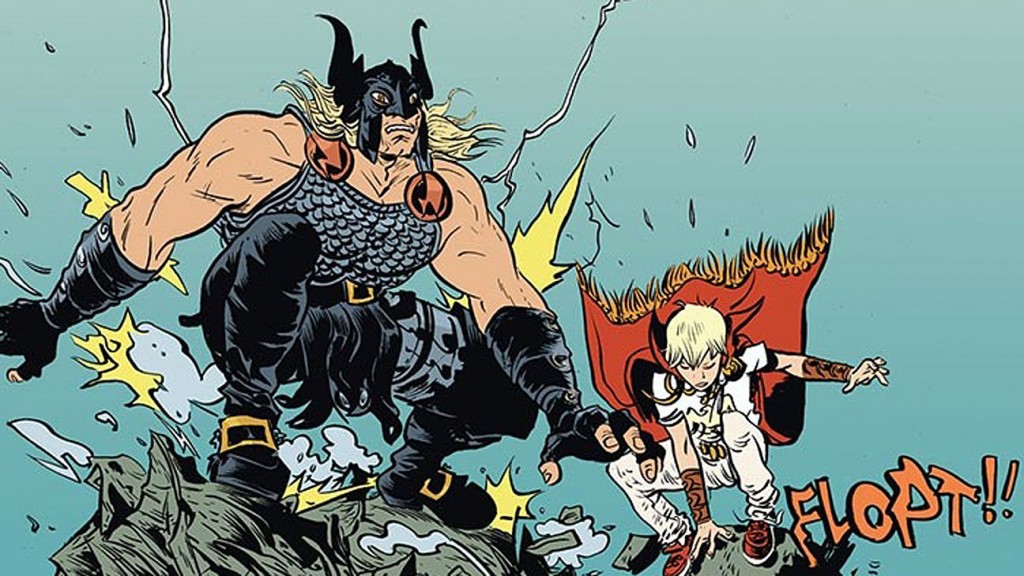 Battling Boy and his father, as drawn by Paul Pope.

The “meta” epithet applies to the fact that the plot is Storytelling 101 kind of simple, and yet it isn’t flawed. When people see something that is this transparently A Story, they term that meta. (Whether this is a good use of the word is up for debate.) This first book (of a proposed four book series) literally sets up the hero, Battling Boy, on a junior hero’s quest. Meanwhile, it also sets up Aurora West, a whip-smart citizen of Arcopolis, on a slightly different hero’s journey as she tries to live up to her science hero father’s reputation. The youth of the protagonists and of those in peril helps boost the stakes, specifically Battling Boy’s, as it means he isn’t the perfect hero yet. There are times when he backpedals against the journey he’s been set upon. The problems both of the main characters face are not insignificant: looming adolescence, the death of a parent, exploration of one’s abilities, discovery of one’s weaknesses. If they all sound familiar, it’s because we’re back in superhero origin story territory. And yet, the story isn’t just another superhero tale.

There is a section in which the Mayor of Arcopolis is trying to convince Battling Boy to fight the monsters that are tearing at their city, and Boy simply nods and says he’ll do it. This is sort of a microcosmic summary of the whole book’s set up. We skip the “whys,” the questions of powers and responsibilities, and rely on the hero’s myth to provide the most basic of reasons for our protagonist: He’s supposed to be a hero, and fighting monsters is what a hero does. But skipping ahead, as it were, past the wherefores, means that Pope gets to address other issues. It means that we get a scene of the Mayor and his team creating a science hero persona for Battling Boy, Arco-Lad, and lecturing him on how a hero must be aware of his public image. Pretty twenty-first century superhero stuff for a 1930s sort of science hero. It’s these sort of clashes between mythological and modern that I hope we see more of in the remaining books.

In the end, with a bit of a reveal of an important antagonist character, I also felt myself wanting to know more about the monsters threatening Arcopolis. Why do they need children? Why are there so many different kinds, and why don’t they all get along? It’s to Pope’s credit that he has created more than one intriguing society in this book.  The sequel to Battling Boy will actually be a prequel that addresses more of Aurora West’s story, something that definitely needs to be fleshed out. The plan seems to be to develop both Boy and Aurora as slightly different types of heroes within this world. Here’s hoping what comes next continues to use the Pope’s fantastic art and the basic concepts of storytelling to show us glimpses of worlds we’ve never seen before.