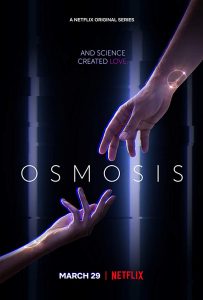 Osmosis Started Out Really Strong, Too

Osmosis makes me look back more fondly on 3% because while that was also a foreign show that used a weird dubbing method over real lips, it was at least an interesting story that explored the depths of its premise. Osmosis seems to have forgotten that its core scientific idea is fascinating and that an entire show could’ve been carried by it.

It’s a show about a new technology that allows you to find your soulmate. In the first three episodes, this is never shown to be false either—the device works, and, apparently, soulmates tend to live close to each other even before they meet. The first episode introduces the idea and the next two episodes add fascinating twists to it. How does a machine like that affect people who use it? What happens when a married man discovers the guy he cheated on his husband with is, in fact, his actual soulmate?

In the third episode, a character says something to the effect of “can a human survive being that happy all the time?” 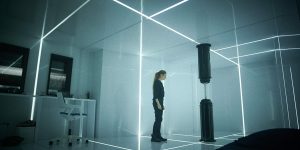 Osmosis: Why Are You Wasting So Much Gold!?

That. Is. Interesting. That sounds like a plot that might show up in an Isaac Asimov novel. I would be praising the series up and down if the show explored it more. Yet it seems shy to really dig into the meat of the matter. And, sure, you could say audiences should be free to ponder the morality and such of it on their own terms, but the arguments and ideas are inferred with such a light touch that it’s like they aren’t even trying.

And Osmosis needed that edge because it’s not excellent in any other regard. The acting is…fine. Manoel Dupont does an excellent job with his character. His story was where I finally felt some real empathy towards these people. But the main cast, even the most important characters, act all brooding and depressed—which makes sense for their backstories—but does nothing to make the show lively. 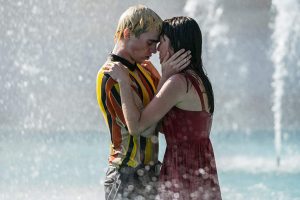 Osmosis Has Some Moments Of Heart And Interest

Now, I’d like to cut Osmosis some slack. It’s not bad. I could see people getting invested in the relationships and intrigue. But if you want interpersonal drama, there are better options on television. Perhaps the reason things like The Orville’s “All the World Is Birthday Cake” episode or any given The Twilight Zone episode is so much more successful with interesting concepts is they don’t have to make the hook and its avenues of exploration last more than two hours at the most—but they could have at least tried more.

I don’t care if there’s a mole at the company—especially when you give who it is away so soon.

I don’t care about the unethical practices of using brain implants for personal gain when the show is about A MACHINE THAT FINDS YOUR SOULMATE.

A subpar hacker drama is not the show I came for—I’ve seen Mr. Robot already—and kind of boring and disappointing is a combo from which I don’t think Osmosis can ever recover. 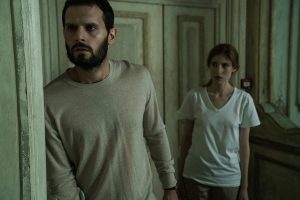