Once Upon A Deadpool, A Cool Trailer

In a move that only makes me like the franchise more, Once Upon a Deadpool is a new movie that’s also not at all a new movie. I would expect nothing less from the merc with a mouth though. The gist is simple, but with the announcement of this silliness new, I don’t have a ton of information to give—but here goes.

Once Upon a Deadpool is Deadpool 2 but made to be PG13. All the old stuff just re-edited with a parody of The Princess Bride to tie together the whole thing. I must imagine that the film cuts to the two of them (Fred Savage and Ryan Reynolds) whenever the movie gets a bit too harrowing or graphic for a younger audience.

This does two things of interest. One, it removes the horror and disgust from a scene in Deadpool 2 so extreme I reference it in my review of the movie, and, two, it allows parents to let their kids see the film without too much worry about it scarring them for life.

Whether they get the Princess Bride reference is another story.

With recent news of Deadpool likely being folded into the rest of Marvel (a fact I am absurdly excited about), we can look forward to some truly odd and interesting character interactions. Can you imagine, for instance, Samuel L. Jackson’s Nick Fury or Tony Stark or Thor interacting with Deadpool? The interplay would be amazing.

Regardless, it’s something worth seeing. Some funds from ticket sales go to a charity as well, so it’s also a good cause. And, even if you’re just in the mood for a good movie, the new content is sure to be pretty darn funny.

Though perhaps this trick isn’t as uncommon as I think, just as a novelty alone, a Christmas recut of a popular movie with minutes of new footage is something amazing. Only as meta a character as Deadpool could have his movie come out twice, and this time with new pop culture gags.

Since we don’t have a new Star Wars coming out this Christmas time, if you need a movie to watch in theaters, you could do a lot worse than Once Upon a Deadpool. 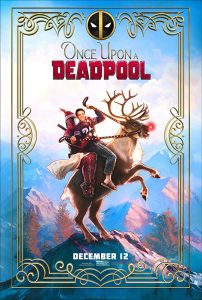