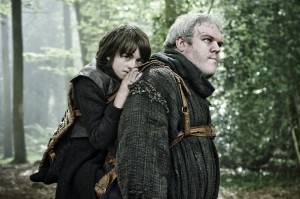 Last week, Rolling Stone dropped a casting news bomb for the Game of Thrones realm. As always, new characters will be introduced but it’s the absence of Bran Stark and beloved giant Hodor that’s causing a stir. While both characters have managed to stay alive in the series, actor Kristian Nairn, who portrays Hodor, told the Australian Broadcasting Corporation that he has the entire season off. “We have a year’s hiatus… Solely because, I imagine, our storyline is up to the end of the books.” Nairn will spend his year off on tour with a GoT themed DJ set excitedly titled “Rave of Thrones.”

The actor portraying Bran Stark, Isaac Hempstead-Wright, however, is not confirmed to be on hiatus. While promoting his new film, The Boxtrolls, in an interview with ODE, he discussed that his next acting project is the next season of GoT, but it’s unclear if it’s the upcoming season. It’s hard to imagine Bran without Hodor. Perhaps, if Bran does appear in the upcoming season, his role may be limited. The series last left Bran and Hodor in the cave of the three-eyed raven with hope for promising developments.

So now we have come to a point where the series relies, at least in small part, on the release of the final books. The fifth installment of the A Song of Ice and Fire series, entitled A Dance with Dragons, was released in 2011. Author George R.R. Martin continues to work on the next book, The Winds of Winter. The author has avoided announcing an estimated release date as he has been too optimistic in the past. Martin’s publisher assured in a tweet that the book would definitely not be ready before 2015.

Season five of the fantasy series began filming this summer and is expected to premiere in Spring of 2015.

You can check out the interview with Nairn below.

This piece marks the debut of another new contributor, Carly Fjeld! Congratulations on becoming a part of the team, Carly!