The Show:  Knights of Sidonia’s main claim to fame is that it is the first anime series to be broadcasted in America exclusively by Netflix. Despite what the phrase “A Netflix Original Series” may make one assume, Knights of Sidonia (Shidonia no Kishi) is based on a manga originally published in Kodansha’s Afternoon magazine. The series is written by Tsutomu Nihei and is twelve volumes long so far. The anime itself, created by a small studio called Polygon Pictures, originally aired in the 2014 spring season in Japan. Netflix picked it up, oversaw its localization (the English dubbing and subbing process), and now streams it online.

The series is a space drama, starring teenagers who pilot craft called “Gardes” that are meant to fight tentacled creatures known as “Guana.” The protagonist is Nagate Tanikaze, a brave, good-hearted young man. Unlike the other pilots with whom he eventually comes to train and fight, Tanikaze grew up underground, in the maze of pipes that make up the underbelly of the giant spaceship Sidonia.  As such, he is unable to photosynthesize like his genetically-modified peers, and is unaware of the history of Sidonia and its conflict with Guana. Because he grew up with only his mentor for company, he spent lots of time playing around in Garde simulators and has become a fairly good pilot. When he is arrested for trying to steal rice, the captain of the ship becomes his patron and asks him to become a pilot and fight the Guana that are coming to attack the ship.

Background: Why did Netflix choose this series as its (presumably) first venture into anime? Knights of Sidonia‘s appeal is that it is visually modern because of its 3D CG animation, while still fitting neatly into genres that American audiences recognize. Most high quality animation done in Japan is still done in a 2D style, and much of it still consists of hand-drawn figures. If Netflix wanted a 2D series that looked really good, it would have to go to a larger studio, and in most cases those studios probably have pre-existing agreements with distributors like Funimation, Crunchyroll, and Viz Media.

Knights of Sidonia is a decently long series (Kodansha’s Shingeki no Kyojin is only two volumes longer), and it looks like it’s getting a second season as well. By jumping in and grabbing the first season when it did, Netflix probably ensures that it will get the second, as well as any other animation adaptations of the work. The series has no connection to major franchises like Evangelion or Gundam, but it does contain space battles, an imperfect future society, Lovecraftian monsters, and heroes in pilot suits so there are certainly reasons for people to watch it. The advantage for Netflix, of course, is that it isn’t connected to either franchise. If it were, Netflix would probably not have been able to get the rights to it.

Polygon Pictures, while a relatively small animation company, specializes in 3D CG and claims to be one of the best Japanese companies in that field. Interestingly, the company has done animation for notable American series in the past. It animated the Annie Award-winning Tron: Uprising series and did work on Star Wars: Clone Wars for Disney XD, as well as animating the HUB’s Transformers Prime series. 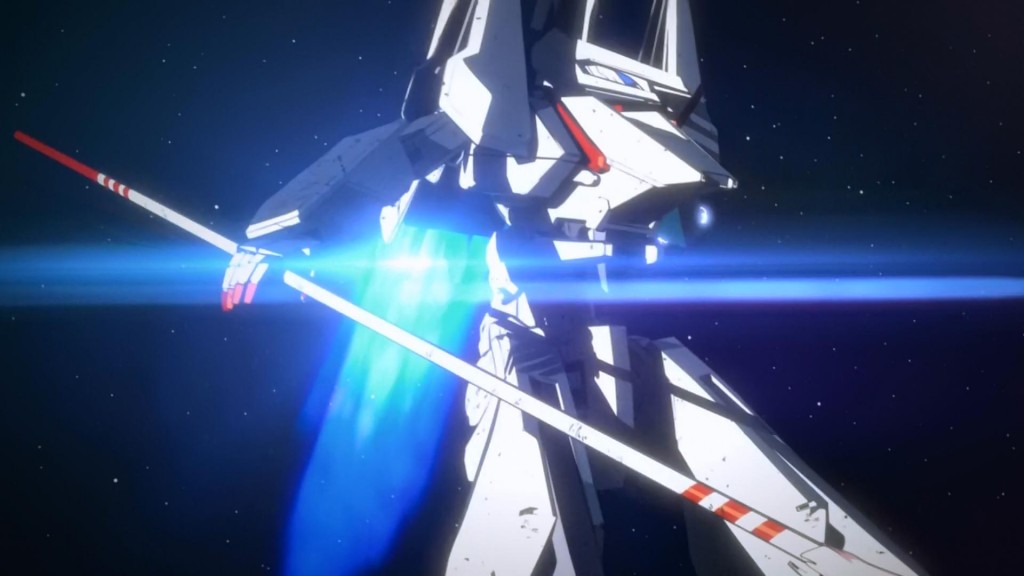 This is the special Garde ship, Tsugumori, that Tanikaze pilots.

Critical Response: Two weeks after its Netflix air date, Knights of Sidonia holds about a four and a third stars rating on the site. This rating means that on Netflix it falls above Warner Brothers’ Batman Beyond and the original Trigun anime, just below the major hit series Attack on Titan, and at about the same level as the modern classic Samurai Champloo. Even taking into account the ratings inflation that stems from a two week run time, that’s an almost surprisingly high rating.

For a Japanese 3D CG project, the animation is refreshingly easy to watch. The battles between the Gardes and creatures are a highlight of any episode, and the human movement so far has been smooth and natural. The design of the show is consistent and recognizably futuristic without being so innovative that we can’t tell a kitchen from a bedroom. The show’s design is dictated by the manga but Polygon has managed to improve it slightly. People like the mysterious Council Members, and certain areas of Sidonia end up being intriguing and memorable. While the character designs are appealing and sometimes cute, I must admit that sometimes I found myself identifying characters by their voices rather than their appearance. They are not the most expressive in this particular style, but again that is due to the original manga designs, and they don’t impede the experience.

In terms of story, Knights of Sidonia probably falls more into the politically-oriented Gundam camp than in the odd Evangelion side of sci-fi. There are enough hints of dark political machinations, and questions surroundings the hero’s origins and the goals of the Guana, to keep the plot moving along. And even if the characters all contain facets of those audiences have seen before in similar series, they are handpicked to be sympathetic enough to earn our interest. It’s also a series that has more to come, so I suspect that we haven’t seen all the secrets of Sidonia yet.

Knights of Sidonia is twelve episodes long and available Dubbed and Subbed on Netflix.