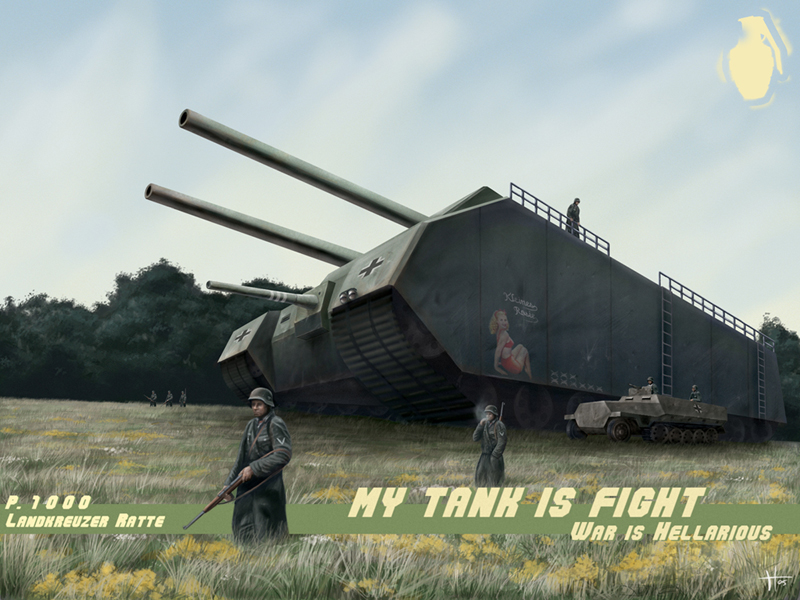 Zach Pasons’ My Tank Is Fight was published in 2006.  It details some of the inventions and ideas that didn’t actually make it to the battlefield.  Many of these are of German origin, fueled by the need for some kind of new weapon to turn the war around.  The picture above, which is in the book (minus the logo) is of the Landkreuzer P. 1000 Ratte with a half-track for scale.  The massive tank that would have weighed over 2000 tons if it ever actually saw production.  Equipped with 11 inch guns and over 9 inches of armored plating, it was called a “land cruiser” for a reason, as it was on the same scale as many heavy cruisers.  Such a tank would have been incredible to behold, completely crushing pavement beneath its weight, until of course some bombers dropped a few heavy bombs on it and turned it into a smoldering wreck.

This of course is the reason why these super tanks aren’t feasible.  Such a monstrosity would be invulnerable to enemy tanks, but would require complete air support to be fielded safely and effectively.  Such a tank would require the same time and resources as a heavy cruiser to build, and in the end, there are much more useful ways to spend those resources.

The Ratte is merely one of the 19 inventions featured in the book.  Each invention takes up a chapter, and each chapter includes an overview of the invention, the development history behind it, what Pasons terms “technical mumbo jumbo”, Parsons’ analysis of the invention, a hypothetical deployment history, and an entertaining and well written short story about the invention (These are usually about 2-3 pages).

This book is one of the few ways I’ve ever seen someone make World War II “fun”.  As a World War II nerd, I’ve seen my fair share of material on the subject and the vast majority of it is incredibly dry.Parsons sprinkles the book with humor.  For example, when he says, “Ultimately, the V-3 emplacements could have provided a potentially superior alternative to the even more wasteful V-1 and V-2 projects.  That’s sort of like saying a fatal heart attack is a good alternative to being thrown into the magma-filled caldera of an active volcano.  You’re just trading one bad idea for another…”  Also, the short stories are, if I had to summarize them in one word, entertaining.  They follow a few individuals and their encounters with these mysterious, crazy weapons that never really saw production or entry into the war.  They are so good that I wish Parsons had written an actual novel based around these characters.

I would recommend this book to any science fiction or World War II fan.  If you’re a history teacher, and there’s a way to incorporate this into your lecture, do it.  Your students will love it.