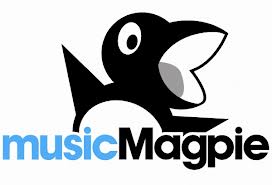 Sometimes I feel like a hoarder. Not in the traditional sense, mind you, where the garbage in my apartment gets out of control and I’m soon using old boxes that KFC biscuits come in as a hat. No, I’m talking about the kind of hoarding where every single DVD, CD, Videogame, hell, even VHS that I’ve ever bought in my lifetime has accumulated to the point where it feels like an infestation has occurred. I mean, when am I ever going to watch Quantum of Solace again? Luckily, Music Magpie is around, a nice and easy way to get rid of any excess entertainment media.

It’s simple and easy to use. First, register using your name and address (you need to be at least eighteen to do this on your own; if you are not, then a parent or guardian must give consent). Then, simply go through whatever DVD, CD, or videogame you wish to get rid of and look at the flipside for that unit’s corresponding bar code designation. Then, see how much money you could get for each. I mostly used it for all the DVD’s I have, and found that most of them were accepted by the website, with the exception of a few (they curiously wouldn’t take Spider-Man 3 or The Matrix Reloaded). The process was easy to figure out and took a lot less time to finish than I originally thought it would. As we speak, I am in the process of sending multitudes of material that has, up until now, been gather dust in my room and taking up too much space.

To conclude, Music Magpie is a wonderful tool for anyone looking to get rid of excess wares of the entertainment persuasion and sell DVDs for cash. The process was streamlined and far easier to understand and maintain than the time I tried to see if I could do the same thing on eBay and ended up walking away from the prospect entirely. It’s good to know that there are people willing to pay for things that many will soon regard as worthless given the wake of digitalized home video that’s been going on, what with movies now being released through digital copies a clean month before physical video (Star Trek Into Darkness and Iron Man 3 being prime examples, but I digress). I am glad to be able to get rid of some of this stuff and although it pains me a little, given that some of these movies I have owned since I was in elementary school, it makes sense that they should be going away now. It’s all thanks to Music Magpie.