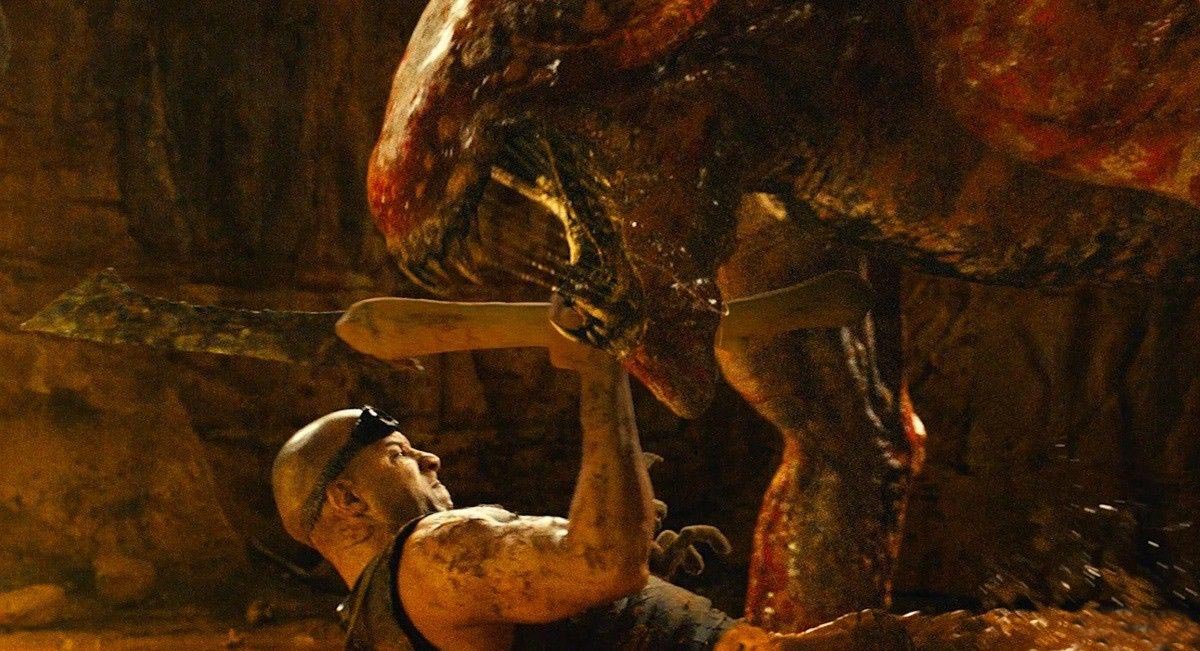 Yo, they got SPOILERS below!

None of the Riddick movies were ever big blockbusters. They never held the financial weight of an Iron Man or Twilight film, but the series has done something that even the most amazing science fiction universes (Firefly…to name one) have not been able to pull off: it has survived in this cutthroat, unoriginal industry. Reason: fan base. The Riddick franchise has one of the most passionately faithful fan bases, allowing it to thrive over the years despite its obstacles.

Directed and written once more by David Twohy, Riddick (2013) delivers on action, suspense and humor. It gives you everything on a platter, taking you back to the tone of the original film, Pitch Black. Riddick (Vin Diesel) is once again stranded on a dangerous planet. As he states in movie, it’s time for him to revert back to his animalistic side.

Now, I know you must be thinking: What the hell? When we last left Riddick, he was Lord Marshall of the Necromancers, a.k.a. the king. An unlikely position for our unlikely hero, so it’s to be expected that something went awry and the hoes left him stranded in the middle of nowhere. Riddick quickly adapts to his new surroundings, overcoming numerous near-death experiences. He appears to be satisfied with subsisting and biding his time until he notices an oncoming storm. The rain begins to awaken the monstrous Mud Demons buried all over the planet, so Riddick decides it’s time to leave before the beasts reach his location. 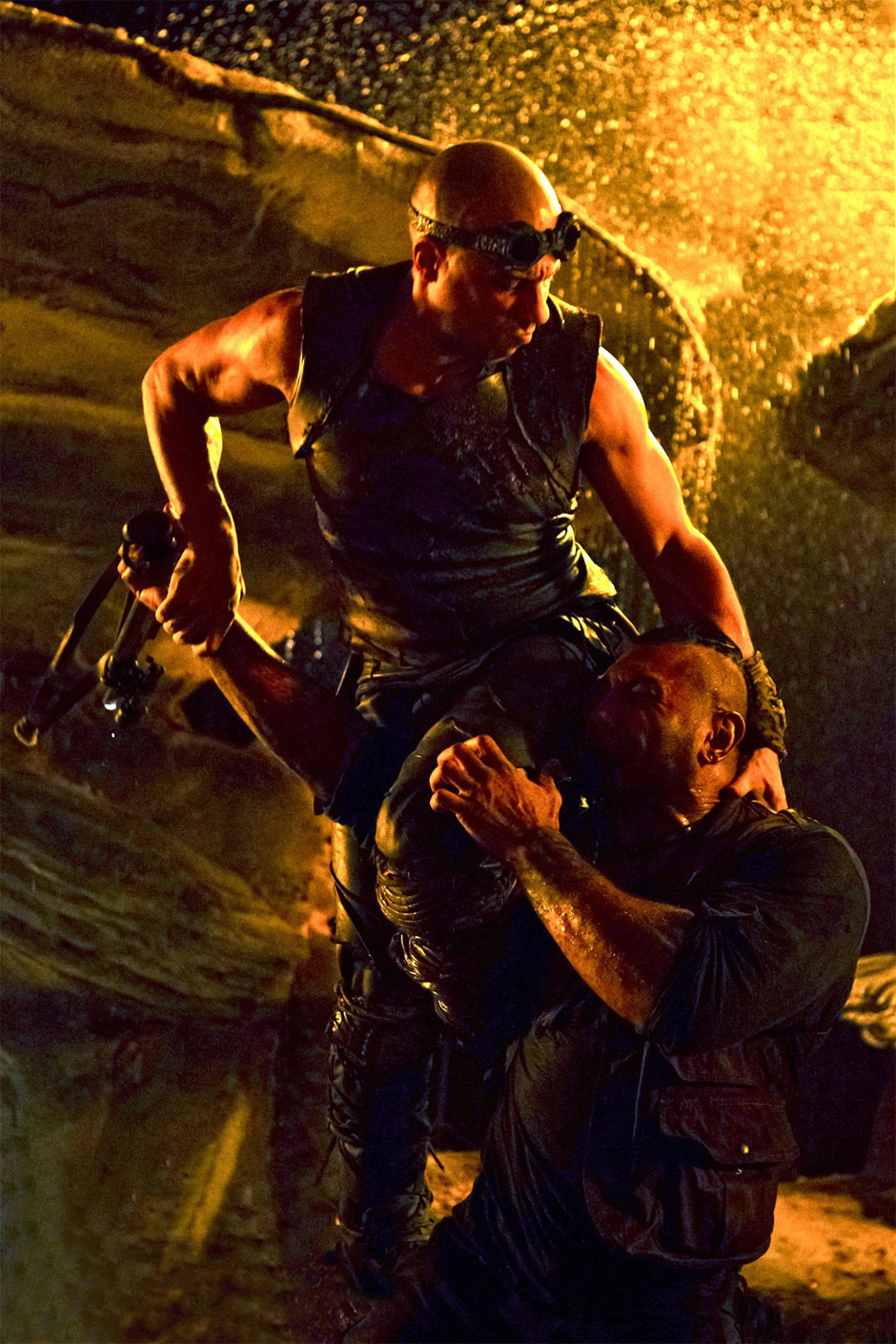 At an old communication station, he hails two sets of bounty hunters. As always, Riddick understands the impending danger and aims to strike a deal. The bounty is double if he’s brought back dead, but everyone knows there’s a reason the stakes are so high. One set is purely in it for the money and that makes them all relatively stupid. The other set is headed by Boss Johns (Matthew Nable), the only female being his second in command, Dahl (Katee Sackhoff). Johns has been tracking Riddick for ten years and wants to know the fate of his son, William, the mercenary from Pitch Black. Guess which crew makes it in the end?

No one ever takes the deal the first time around. One thing I’ve learned about Richard B. Riddick over the years is that he says what he means. When he says he’ll kill you with a teacup, he gon’ kill you wit’ a teacup, mon! I don’t know why people think it’s a game, but it’s a good thing for us they do because what ensues is a film so packed with action that, when the credits roll, you’ll expect your TV to blow up. It has all the addictive Riddickesque qualities: his sass, his badass, and of course, the sexual innuendos (you know he likes the blondes—that’s how I knew those Necro-chicks weren’t cutting it in the beginning).

Now, I’ll admit, I was a skeptic. A longtime fan of the Riddick movies, I rolled my eyes when I heard about another sequel. Pitch Black (2000) was amazing. The Chronicles of Riddick (2004) was amazing for different reasons, but to add another one? Wasn’t that a little risque? Everyone knows that once you travel down the movie path of sequels, there’s bound to be some complaints.

For many people, the second film didn’t cut it. In terms of numbers, the production barely earned a profit. It was a different kind of Riddick movie. We love that Riddick is a beast with the beauty of morality. He’s been hardened by the world, abandoned more times than one can count, but only murderous to those who have ill intentions. Chronicles placed Riddick in politics, put him in civilization, and that might be why many of his diehard fans turned up their noses. Clearly, the people want him on his own, surviving against scary alien creatures, and being hunted. Isn’t that a tad limiting for Twohy?

See, I’m easy peasy. As long as Riddick is kicking butt, I’m on his team. Now, that butt could belong to demons, alien predators, merc crews, Necromancers, randoms—as long as he’s beating someone or something up, I’m totally going to watch…multiple times. 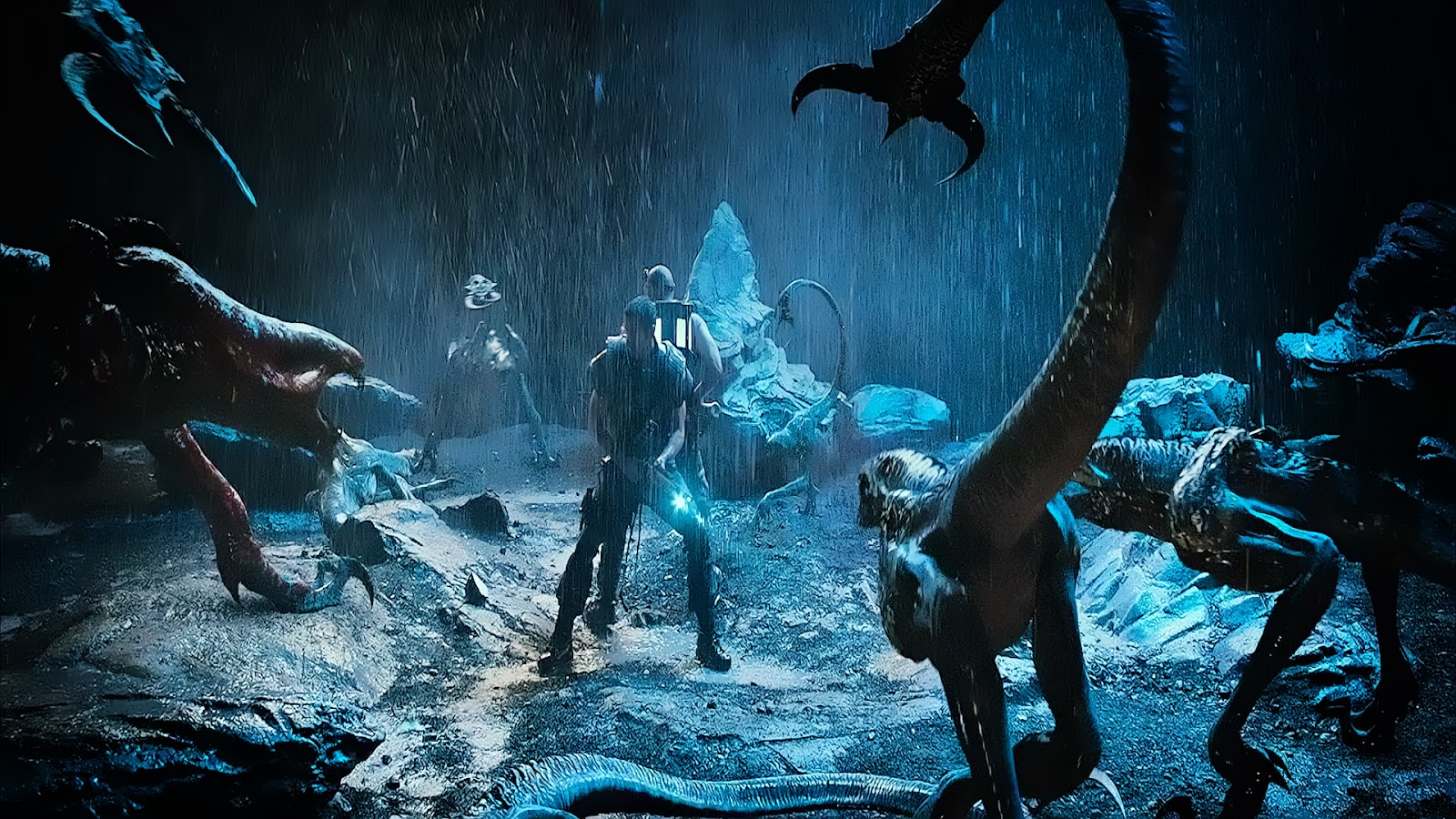 I’ve read that a Riddick 4 has been greenlit because of the success of the third Riddick installment. Maybe Riddick will finally get to Furya and learn more about his people for chrissake. And maybe we’ll get to see what the Underverse looks like. Maybe Riddick will fall in love and start a family, and then his life will be torn apart by an alien invasion. I don’t know! To be honest, regardless of whether or not any of that happens, I’ll be watching. I’m a loyal customer. I don’t care if I have to wait another ten years. I’ll be watching as long as Vin Diesel is the one playing Riddick. (Oooh, but I could see another actor as Riddick’s son later on down the line.)

Besides, it’s people like me that keep Riddick afloat—not that it was ever drowning, but you know what I mean. Who cares if the film reels in a bunch of newcomers? It was made for us Oldies that have been with our guy since 2000. When I saw Diesel listed as one of the producers, that sealed the deal for me. I know it’s a great film and millions of fans know it’s a great film, but Riddick is a passion project above all else. You don’t dedicate time away from your family and millions of dollars to making a film that isn’t close to your heart. Vin Diesel could choose to quit the series all together. His Fast checks have given him that privilege. It has to be something more for him.

While money is nice, and it definitely cost buckets of duckets to make, people have built a connection with Riddick. We worry about him, we feel sorry for him, we love him, we understand him, we want to sleep with him, and we want him to beat up the bad guys. That said, we gain no vanity from it. He’s a hero who doesn’t want to be a hero, and he’s not washboard whiteboard (like Chris Evans in Captain America, which I couldn’t sit through—and all the haters can sit down). Riddick’s not concerned with being a “good guy” or actively pursuing the “right” thing. His actions, for the most part, are situational and instinctive to him. I’d even go so far as to say that he’s an honorable man who just wants to live (if you get in his way, you get a blade to the ribs).

Riddick is and always will be a film that never lets you down, and that’s why it’ll always be a damn good film to me.