Guardians of the Galaxy may remain an outlier in the Marvel Cinematic Universe, but it is one of the most enjoyable sci-fi adventure films I have seen in a while. Screenwriter Nicole Perlman and director James Gunn have managed to give us a fun movie (slightly reminiscent of Gunn’s cult classic The Fifth Element) that also broadens the MCU in an exciting fashion. Where the movie seems to stumbles slightly is in not providing enough characterization amid the feats of derring-do and the flashy wonders of outer space.

The amount of information that Guardians of the Galaxy asks the audience to take in, however, is admirable. It shows that the filmmakers were invested in bringing the Marvel universe to life in as much of its variety as possible. Fans of the comics will very much appreciate every intergalactic cultural touchstone that makes its appearance. But while all these planets and organizations have bearing on the plot, those who are unfamiliar with many of the terms will have to work harder to grasp every bit of the situation. 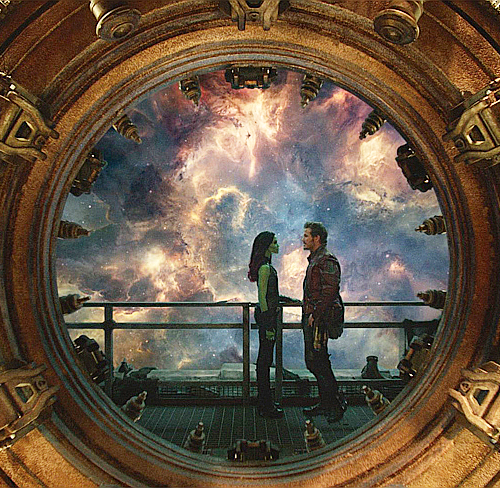 Perhaps in order to counteract the abundance of new information, the plot itself is little more than a really long heist with a bit of extra heroism thrown in at the resolution. Individual scenes, like the various escapes and fights, are well orchestrated; the main escape sequence is definitely a highlight of the movie. The pace of the film overall, however, feels slightly off. In a refreshing turn though, the movie owns up to its advertised cheekiness by playing with some of the superhero and adventurer tropes, like when characters don’t know who Star Lord is.

As for the crew themselves, Rocket (voiced by Bradley Cooper) earned the most of my attention because, ringed tail or not, he appears to be the character with the most agency and the clearest goals. His backstory is revealed in a realistic fashion, and he wears his heart on his sleeve when it comes to being different from the others and feeling disrespected. His pal, Groot (voiced by Vin Diesel), the tree-like alien, really benefited from being physically expressive and we understood his character fairly well through his actions alone.

Peter Quill (Chris Pratt), as the actual protagonist, had bigger boots to fill. He had his serious moments and his mistakes, but we always felt free to laugh at his more goofy or snarky aspects as well. Pratt danced along the fine line of rogue and hero and, for the most part, gave us a character worth rooting for in the end. It was Quill’s “loser moments” that helped separate him from the simplistic, hotshot space boy stereotype. 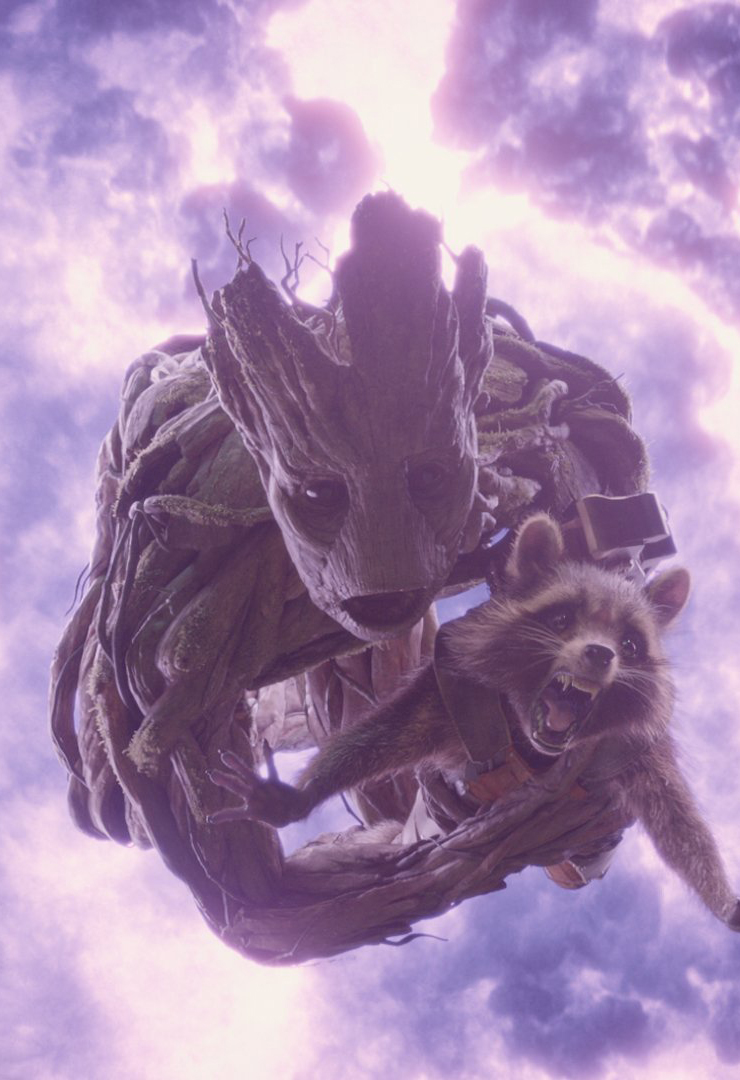 Groot and Rocket are on their way out of this situation.

Of the five main players, Gamora (Zoe Saldana) and Drax (Dave Bautista) suffered the most from under-characterization. Gamora was stuck mostly in the tough warrior-lady slot, with moments of something deeper. Her relationship with the very impressive, but very angry, Nebula (Karen Gillen) had the potential to be a great dynamic, but the two never had enough screen time together to fulfill that promise of epic familial conflict. Drax had a very warrior-appropriate arc to his character, but it was only at the end that we got the feeling he might be a more interesting, understanding guy beneath that hard skin.

The best glimpses into these characters came in moments of banter, or in the quiet between explosions, and perhaps the film would have benefitted from a few more of these. Learning that Drax’s culture doesn’t have metaphors, or that Rocket and Groot have been together long enough that they can really understand each other, or that Gamora is not adverse to non-lethal activities but just hasn’t had the time, are all important to seeing these larger than life characters as people.

One could say the film overwhelmed in information about the whole universe and underwhelmed in terms of the characters themselves, but they all have a moment to shine, as individuals and then as a team, and we love it when they do. The filmmakers successfully showed us how their odd Guardians’ ambivalence or greed could be bent in extreme circumstances into something more noble. I knew where this ride was headed, but I jumped on all the same and had fun along the way. Putting it all in perspective, we should also remember that Gunn has managed something nearly as impressive as The Avengers in scope, and all without the advantage of having had each character introduced in previous films. Guardians of the Galaxy may be an outlier, but it never claimed to be anything other than that, the fun wild child of the MCU.