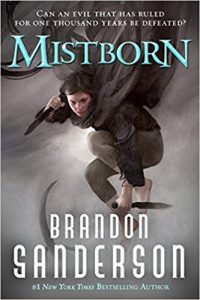 The Mistborn Trilogy is a long series, each book being in the high hundreds of pages. I’m only mid the second book at the time of writing, but for those wondering if it’s worth reading the first book in the series, this review is for you.

Because Mistborn: The Final Empire is certainly catnip for a specific type of reader. Fantasy is a broad genre, yeah, and has a lot of aspects to it, but this is a series that is meant for people who like Dark Fantasy, who like “hard magic systems,” and like fantasy with a political edge. And it’s the hard-magic system that is the most intriguing. Metal is the name of the game. The ability to propel metal in a straight line from wherever a person is can be used to shoot coins like bullets, for instance.

And, as I said, it’s also very dark. Violent, gory, and adult in some of its topics. If someone gets hit with the coins, then they bleed. People die and are murdered, and it’s treated as a reality of combat. Rape and systemic oppression are also explored. Though it’s not masochistic or reverent in its portrayal of these topics and being a Mistborn, having those powers, is still suitably escapist for those who want escapism from their fantasy novels. 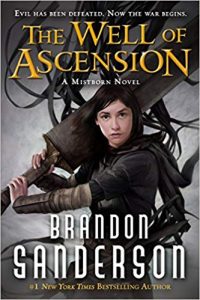 The other notable thing about the books is Brandon Sanderson’s style. It’s nearly impossible to escape it. He’s a skilled writer, and the characters do act and talk differently, but his focus on the technical, moment to moment use of magic, his penchant for very specific descriptors, and his seeming reflexive use of characters saying “all right” permeate the book. If you don’t like how it goes in the first few chapters, if it’s not to your taste: it’s not changing. Brandon is consistent, for better or for worse.

He’s also, though, good at pacing. The plot has a methodical progression: it’s a lot of buildup, establishing, and learning of things before everything happens at once. But it’s interesting enough that those 600 pages breeze by and feel necessary. I raise an eyebrow at how obvious the pop-ups of action to keep the plot going are, but it does its job—and allows for some truly creative moments of choreography during fighting. 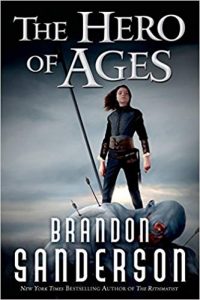 But how are the characters? No story is complete without them, and, well, it’s interesting because the first book does a lot of work building up Vin, our heroine, but, because she’s still coming into her own, her mentor Kelsier does the job of lifting the first book. And, with that fact, boy is it lucky that he’s one of the best written-fantasy heroes I’ve ever read. Full of genuine emotions, given real mistakes, and mostly handled with skill and wit. Some moments of his genius do seem a little too smart for him, but, then again, he’s shown to be capable of it, so it’s likely just my issue there. Though I can’t speak for progression, Kelsier (and later characters Elend, Breeze, and Spook) all carry the novel as Vin comes into her own.

Really, a lot of my complaints with these books are my own seeing of the gears in the machine, so to speak. It hinders my ability to fully enjoy a good, well-thought-out, and deftly told fantasy story. But, if you’re not a pretentious media-soaked critic like me and you’re looking for a new series to dive deeply into—and the worldbuilding does invite one in and keeps you thinking—then Mistborn: The Final Empire is a great place to go. It’s a unique world, magic system, and thematic exploration. It’s a trip back to the massive fantasy novels you might have devoured as a kid but grown up with you and ready to make you imagine a new world.