Missing Link Is A Visual Treat From Laika

Missing Link proves that Laika is still at the top of their game in their niche craft. From Coraline to ParaNorman, they have proven that they can use a unique art style and then tell amazing, entertaining stories.

Honestly, sometimes they do Pixar better than modern Pixar.

Missing Link is just a delightful film. The premise is a great excuse to show off amazing vistas and wonderful creatures.

Missing Link Is A Work Of Intense Artistic Passion

And this movie really is all about the little details in those vistas and even quiet moments in-between. The story, or more so the structure, is very simple without it. A globetrotting type deal—but it’s got so many tiny things in both the dialogue and the animation that they really didn’t have to include, but they did anyway, and it leads to amazing results.

I am going to say the word charming a lot here because that’s the main thing about the movie. Everyone, except the villains—and even then one of them is a little—is delightful, charming, and being expertly voiced. The style of dialogue has an almost Monty Python way of being both posh and very silly. This comes out especially in the human main lead. Hugh Jackman plays Sir Lionel, a hyper-competent but also misguided adventurer, who’s got an energy to him, a sureness, with no implication that he doesn’t know what he’s doing—outside true empathy and kindness—that I haven’t seen from this sort of character in a long time.

He’s a standout for me personally…but, if we’re talking characters, it’s hard to ignore the star of the show. The movie is named after our friend Mr. Link, a large puffball of a sasquatch, who, from the first moment he’s on-screen, becomes a Baymax type character—and is almost as lovable. His voice seems to go a little all over the place, being inconsistent in delivery, but his animation and mannerism make him engaging and charming. Even the somewhat token love interest gets way more craft to her than usual, being well thought out and complex in ways most movies don’t even attempt.

So, if the plot’s serviceable (even containing some social commentary), and the characters are good, and the visuals engrossing, then it’s hard not to give this all the accolades. It’s kind of a perfect kid’s movie. I have very little to complain about—but, I do have one or two things. The first is a minor plot hole at the climax, and only matters because they made it a point to mention how heavy Mr. Link is (over 600 pounds)—you’ll see what I mean if you keep it in mind—and the other is simply likely a limitation of the style. Laika is doing important work in making stop motion as robust and gorgeous as possible, so I don’t mind really…but it turns out fight scenes, especially ones with a lot of punching, look odd. It’s both too slow and too floaty. There’s a lot of fighting in this movie too, which makes it more noticeable. Running, leaping, grabbing, even back in Coraline that kind of action looked fine—the scene on the boat involves even some stunning running choreography—but stop motion is not the medium for a bar brawl.

But that’s such a nit-pick. If that’s the minor tradeoff for something this good, then so be it. Missing Link is something I can recommend to really anyone. I said it’s a kid’s movie, but it’s entertaining and uplifting no matter your age. If you haven’t yet, you owe yourself a fun adventure, a joyous whimsy, a triumph of a movie that is Missing Link. 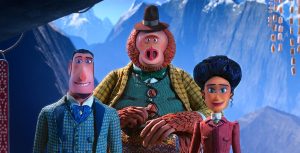