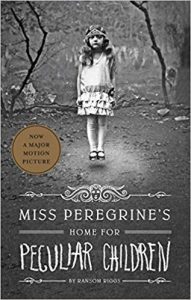 Miss Peregrine’s: A Peculiar Hit Of A Book

My initial worry regarding Miss Peregrine’s Home for Peculiar Children was that it was going to be too much a superhero book, too much an X-Men knock off, or some wannabe Harry Potter, but with a twist. The title seemed to promise as much, after all, and I was not in the mood for another derivative.

But, to my pleasant surprise, that’s not what I got. Miss Peregrine’s is, deceptively, a horror novel, deliciously dark, and tinged with mystery, with only tangential connections to superhero media.

And it’s all in the presentation that this is achieved. On paper, it should be something generic, but the way the story handles powers, handles “Peculiars,” and how it takes some frankly very adult looks at allegories of racism and bigotry and persecution sets it apart. Descriptions of gore and death and mental unwinding are jarring and gristly. It’s more Hunger Games-like than I expected, with lethality and the implication of child-killing.

Miss Peregrine’s Is Quite A Dark Young Adult Novel

It has style is what I’m saying.

And it extends down to the prose and the dialogue. Characters have a way of talking that I wouldn’t call realistic, per se, but is so distinct and natural to the strange setting that it’s not jarring, it just draws you into the world. This may be one of the first books I’ve read that presents powers in a way that, despite lacking any scientific explanation or attempts at logical reasoning for how it works, still feels like powers that could exist. This may be because of the way the powers often warp its “users,” or how it’s often not so much a “power” in the superhero sense, but a simple quirk of anatomy unique to that person. Invisibility, but with no off switch. A second mouth on the back of the head. A body that always defies gravity.

“Peculiar” is, turns out, the perfect word for this book.

Miss Peregrine’s Is Weird But Oddly Not Unnatural

And perhaps that “realism” and naturalistic feel comes from the gimmick of the book. It honestly feels like a trick to get the writing process started that just never stopped: the book was written with real pictures as inspiration. They dot the book and often have an aspect to them that feels like some urban legend you’d now find on the internet.

Miss Peregrine’s has too many things unique to it to be written off. In the young adult urban fantasy genre, that’s honestly a triumph by itself. It comes out as a peculiar, but wonderful read all its own.