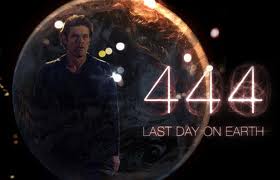 Written and Directed by Abel Ferrara

*This film was released domestically in 2012 but I just saw it recently so I thought I would share my views on this mostly unseen film.

When the basic premise of a movie has to do with the end of the world, one’s mind usually wanders to fare like 2012 or Armageddon. If those movies suffer from poor characterizations in a forced narrative, the microcosmic 4:44 Last Day On Earth has the other problem. It is a movie that introduces us to two potentially fascinating people facing the end of the world together and ultimately goes nowhere. It does follow through to a conclusion, to clarify, but it’s nowhere near the achingly tender drama it could have been and presumably wanted to be considering its own premise and the cover of the DVD copy I rented.

As the film begins we come to realize two things: the world is going to end in less than twenty-four hours due to solar radiation and there is nothing anyone can do to prevent it. This is an excellent way to start a movie, as we can dispense with any pleasantries regarding whether our characters will make it in the end and get down to the gritty nature of their plight. We follow Cisco (Willem Dafoe), a well-to-do urbanite spending the majority of this time with his live in girlfriend Skye (Shanyn Leigh). 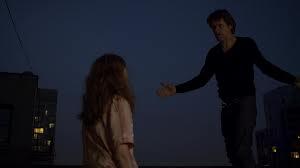 They spend this last day in a relatively low-key manner at first; they make love, she paints, he watches television, and so on. It gets to the point where we see cracks in this relationship, ones that these two may not want to confront on their last day alive together. Instead of capitalizing on the complexities of their relationship, the movie meanders and ultimately leaves us with a criminally truncated narrative that doesn’t follow through on any of its promises with the cop-out unspoken response that the world is ending and there isn’t time for it. This does strike the viewer as a realistic take on the material, but it in no way provides for a satisfying viewing experience.

It should be said that our two leads are good with the material they have been given before this gets too negative. Willem Dafoe does a restrainedly manic man easily prone to weeping who may not be as happy with his choices as he seems. Or he is. The movie doesn’t really delve too deep on that potentially interesting tidbit so I won’t either. Shanyn Leigh plays a character all over the place emotionally but is still able to keep it together when it matters most. There isn’t a sense of catharsis or understanding we get from their relationship, and it in fact feels more like they are just together because they don’t want to be alone. The supporting cast is small, Boardwalk Empire’s Paz de la Huerta shows up for a blink-and-you’ll-miss-it cameo and Natasha Lyonne heads the round-up of small gathering later in the movie. Some characters show up via Skype as well in a bit of product placement.

The work behind the camera, headed by writer-director Abel Ferrara, is competent and makes for some fantastic shots like the green-hued sky signaling the end of times. I would say a lot of the artistic flourishes done in this respect would be more impressive if the overall package it came in wasn’t so lethargic. Sure, the end of the world isn’t a situation one would describe as needing to be full of merriment and it would be disingenuous to have a movie like this feel uplifting, but the entire movie just lacks purpose.

Overall, 4:44 Last Day on Earth is mediocre, almost unforgivably so. It is a movie that introduces a fresh take on the whole end of the world scenario studios have been pimping out for years and wholly wastes the opportunity. I found myself wishing towards the end that one of these characters was the key to saving the world through some hackneyed reason or another, kind of like some of the movies I have listed above. When watching Armageddon springs to mind as a better way to spend one’s time, your movie has problems. 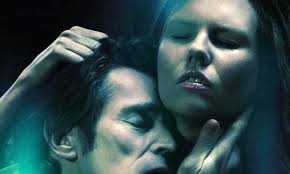