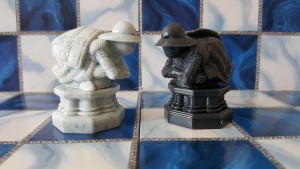 Editor’s Note: The following post is brought to you by our friends over at Total Marketing!

With all the excitement about the gradual rollout of virtual reality devices and games in 2016, one thing that’s been somewhat surprising is the focus on so-called “mini-games.” Now that they’re out, it makes a good deal of sense. Game developers are only beginning to explore what VR can do, and a lot of the early games are more experimental than anything else. Thus, it makes some sense for those developers to try collections of mini-games introducing different concepts, rather than spend their energy (and money) crafting overblown experiences that might not pan out.

The most prominent of the mini-game collections at this stage may just be Valve’s The Lab, which has been described as “a series of experiments for entry-level VR users.” The game (or package of games, more accurately) includes a precision archery activity, a slingshot application, and a spaceship evasion simulator. The mini-games aren’t said to be particularly complex, but they demonstrate different aspects of VR, and they thrill in their own capacities.

But it’s the concept of VR mini-games that’s more exciting than any one such game to have been released yet. It’s a little bit like the early days of smartphones, when mobile gaming became more prominent, and simple experiences could seem like so much more. There’s an opportunity here for some minimalist games to really excite people and reveal the potential of virtual reality.

Here are a few mini-games that would do the job flawlessly.

This doesn’t appear to be a real thing (thank goodness), though it wouldn’t be surprising if someone in the world has tried it. Either way, the idea comes from the 2012 James Bond film Skyfall. Basically, Bond (Daniel Craig), let a scorpion crawl onto the back of his hand and then, using that same hand, took a shot, eyeing the scorpion the whole time and minding his motion so as not to upset it. He finished the drink, shook off the scorpion, and trapped it under the empty glass (check it out). This is a ludicrous activity, but it could be uniquely exciting on VR if the scorpion looked realistic. This would be a terrific way of showing just how real and terrifying VR can feel.

If you’ve ever staked anything on a spin of a roulette wheel, you know the brief but enthralling type of suspense that follows as you watch that wheel spin, carrying a ball, making clanking and spinning sounds as you await your fate. This is a game that’s been replicated in various forms, perhaps most impressively through a live dealer roulette experience online that nearly works like VR already. It’s all on a computer screen, but the chance to wager real money and witness a live dealer casting a ball into the wheel is a lot of fun. A VR game likely wouldn’t incorporate real currency, but the idea of a roulette wheel coming to life would invoke one of the more physical, sensory gaming experiences of the real world.

A lot of the charm in early VR games, and even mobile games, is that they can bring back older experiences. This can mean retro video games or tabletop activities, but in any case, foosball would fit right in. The fun thing about imagining this game in VR is that it’s surprisingly complex when you think about it. There are several handles on each side controlling several players each, and quick reaction time is needed. It might actually be an interesting challenge for a VR developer, and it could be a blast as an early example of head-to-head multiplayer gaming in VR. Someone could also try to design a VR version of a life-size human foosball table, but that seems like it would be dizzying to get into!

Remember the Guess Who? board game? Each player would have a card with a character set aside for the other player to guess. You’d have a collection of characters in front of you to eliminate by, say, asking if the other player’s card is a man or woman, etc. Now imagine the same game blown up to a life-size experience with human avatars instead of character cards. You could walk in and amongst them looking at details and features that go beyond the old game’s relatively small drawings as part of a bizarre but enjoyable experience.

And finally, if we’re going to discuss the idea of walking among life-size character avatars, we may as well cover the idea of Wizard’s Chess (from the Harry Potter series). Wizard’s Chess is basically ordinary chess in which you command the characters to move verbally, and when your piece takes your opponent’s, things turn violent. This could easily be accomplished in VR, but it could also be blown up to a life-size adventure, just as it was in the end of Harry Potter And The Sorcerer’s Stone. There could be licensing issues, but aside from that this could be a relatively simple game. It would also likely be one of the most popular ones out for VR devices.

There could be innumerable mini-games on the horizon that we don’t know about yet, but these five certainly seem like they’d be a lot of fun.