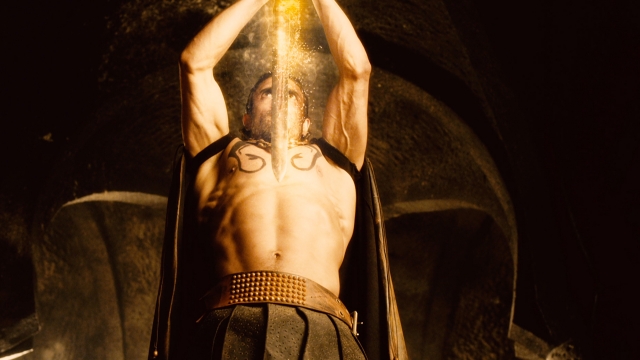 “Pledge of Anya” takes us to an ancient world, covered in canyons and deserts. A small group of people foresee an imbalance on Earth that will wreak havoc on future human civilizations. This “dragon,” as they call it, will be hidden among the humans, and it is their duty to send a slayer to defeat him. Led by their high priest, Kern (Rutger Hauer), they perform a ritual in the name of their god, Anya. This ritual of painting secret symbols on the body of the chosen warrior, Joshua (Grégory Basso), and beating swords on shields is meant to prepare him for time travel using the Divine Blade. It’s a pretty big deal, ladies and gentlemen. The fate of the human race hangs in the a balance.

Our hero is teleported to a new land facing a harsh winter. An extremely different climate than Joshua’s home (as seen by the fact that he’s running around half naked), this place is stuffed with barren trees and snow. After an unnecessary encounter with a hunter (Michaël Troude), Joshua finds refuge from the cold in a barn with a horse.

Not an anthropologist, but I’m pinning their location somewhere in Germany. The accents are a dead giveaway, as well as the uniforms of the guards, Jans (Puiu Mitea) and Peter (Gabriel-Mircea Velicu).

While the guards are away, Joshua follows the path laid out by the sword, leading him into a home. He sneaks in through a window and sees the sleeping form bundled up on a bed. Aimed and ready to strike this easy prey, Joshua pulls back the covers and discovers a sleeping child. Peering into the eyes of this harmless “cursed one,” he wavers, and the guards burst through the door. 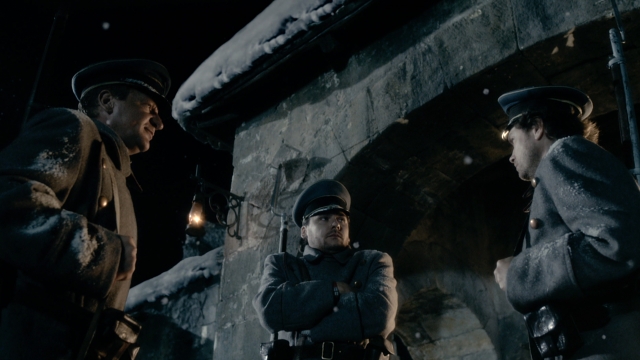 Joshua makes it out of the room, but he is wounded. One of the guards fatally shot him in the chest as he made his escape. As Joshua dies in the snow, the sacred sword returns to the past, and Kern simply announces that the mission has failed to a crowd of despondent people. I guess they were all saying, “Win some, lose some. Oh well, it’s not us.”

Back in the young boy’s room, the now sleeping child’s mother strokes his head and assures him that there is nothing to fear. Wanna know the kicker? Kid’s name is Adolf. Gee, I wonder if it’s a coincidence. Just one question: Is your mind completely blown? Wow, way to screw us over, Josh. By the way, did you get my thank you note for the Holocaust?

The next episode, “Back to Reality,” reminds me of Fight Club. For starters, nobody has any idea what the hell is going on. Norman Wilk (Jimmy Jean-Louis) sells people their dreams. His clients, Stanley (Dominique Pinon) and Lana, think that with the aid of his kooky helmet and mind-altering/enhancing pills, they can seep into a virtual reality that will allow their deepest desires to manifest. 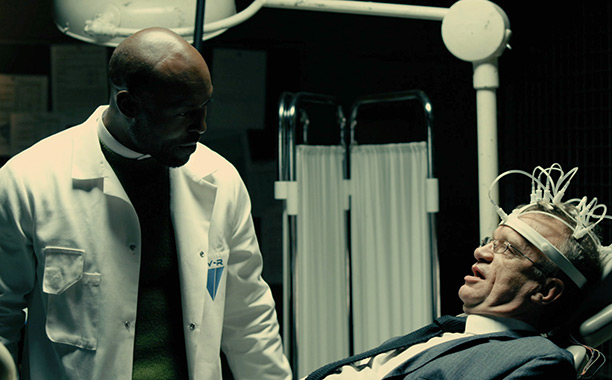 Norman reads Stanley like a manual. First, he wants the adventure, the thrill of courage and heroism, then he wants to sleep with a woman, and finally, he wants violence. Please tell me all men don’t think like this. After experiencing a spacecraft explosion, witnessing Byron and Tybalt duel in King Tobias’ castle, and sleeping with a servant (with gonorrhea), Stanley’s hooked on Norman’s games. The problem is that it’s all a game. One day, Stanley goes to Norman. He’s finally fed up with his boss’ ridicules and decides that since he can’t get back at him in real life, he’ll do so virtually. Norman gives him the magic pills and a bat to exact his revenge. Except this time his virtual playground produces some real life results. Stanley beats his boss to death and is hauled out of the office by the police.

Sad thing is, Stanley isn’t the only one that got a crash course on reality. All Lana wanted out of the experience was a little romance. After one session with Norman, she felt that she could come to him after she witnessed Stanley’s downfall to seek solace. It might’ve been fine if Lana’s dream wasn’t to fly. Like Stanley, Norman made Lana’s dream possible as well. She went flying off a building and landed straight onto the ground.

It’s unclear why Norman was dabbling in manipulation and murder until his next client, Anya’s fierce warrior, is tasked with stealing a diamond on Norman’s behalf. Apparently, everything that I just yapped about in the beginning was all a fantasy produced by Norman’s pills. Gee, thanks, Norm. 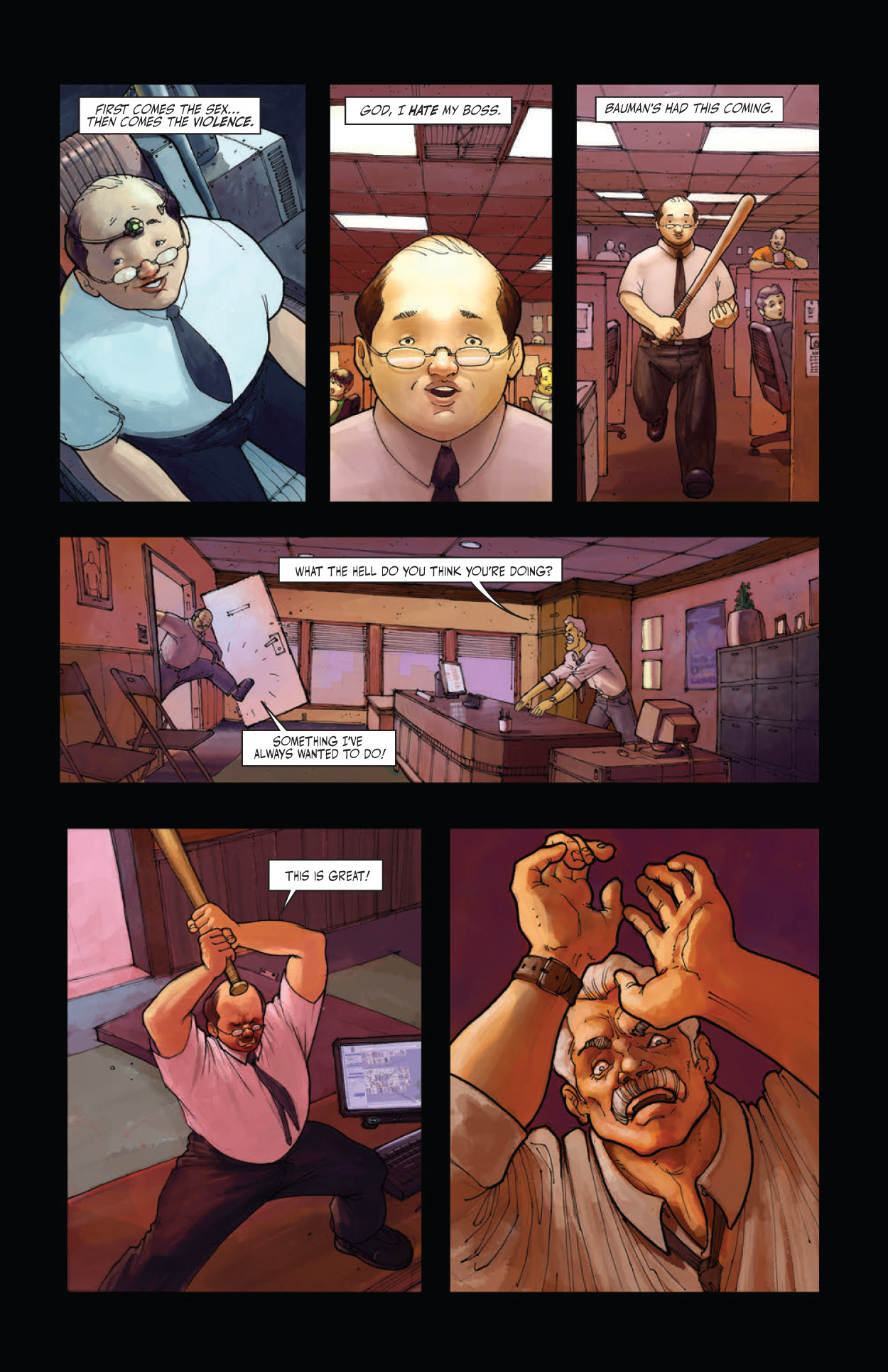 Just as Norman is about to make a clean getaway, and the bad guys are about to score a point, something off the charts weird happens. A giant fireball (the Metal Hurlant, by chance?) rips through the air, heading straight for Norman. He stands there, laughing as he disintegrates.

Norman, himself, was actually the puppet, not the one pulling the strings. With the freedom assimilation over, we see that he was the one acting within a virtual reality. It was a test to see if Norman, a presumed inmate or convicted criminal seeking parole, could be rehabilitated. He failed with flying colors. In the words of Lana, “…murder by mental manipulation, orchestrated suicide, corporate sabotage…” are some pretty hefty crimes. Hell no, he shouldn’t be let out! He created an entire hierarchy of mess. People with the capacity for that much deviousness need to be locked up somewhere!

So, I probably spent a good majority of the first episode confused as hell. It wasn’t until I watched it for a second time (with subs) that things began to unravel for me. MHC has a way of doing that people, as there are so many things going on within the span of 30 minutes that, if you aren’t watching, they will Jedi mind trick the hell out of you. Most of this “Pledge of Anya” was kind of a snooze fest, but they really came in at the end with that left hook, knocking me out. I mean, could you imagine if Iron Man or Superman or any of our comic classic heroes just failed? What are we supposed to do? This is why you always have to have a backup. This is why there’s a JUSTICE LEAGUE.

I had no idea that “Back to Reality” would end that way. The premise of the episode was cleverly thought up, and it was probably one of my favorites this season. 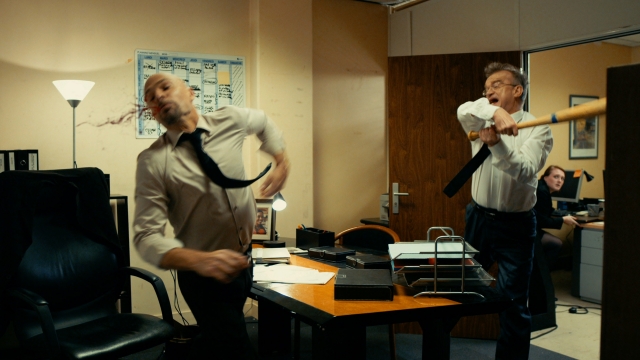 Next week, Syfy’s premiering the final two episodes of this season (or really the mixture of two seasons), so check them out! I wonder what kind of crazy stories we’re going to see. They do a pretty good job of shocking you within such a small time frame.

In other news, I’m curious about what show they’re going to put into the timeslot. Dominion doesn’t come out until June 19th, and yes, I will be watching that. It looks like Legion.

Anyway, if you see any comets in the sky, just run like hell, because if it’s the Metal Hurlant, you’re already screwed.