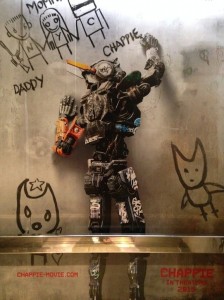 The film is about a childlike robot finding his place among humans in the world. Chappie, voiced by frequent Blomkamp collaborator Sharlto Copley, is learning to think and feel for himself from a ragtag group of criminals and scientists played by Slumdog Millionaire’s Dev Patel and South African rap group Die Antwoord’s Yolanda Visser and Ninja. According to the trailer, the little robot that could makes a lot of people angry, and Hugh Jackman, using his native Australian accent, wants him destroyed. One little robot hoping to become a real boy causes a bit of chaos. You can check out Chappie right here!

Every child comes into the world full of promise, and none more so than Chappie: he is gifted, special, a prodigy. Like any child, Chappie will come under the influence of his surroundings – some good, some bad – and he will rely on his heart and soul to find his way in the world and become his own man. But there’s one thing that makes Chappie different from anyone else: he is a robot. The first robot with the ability to think and feel for himself. His life, his story, will change the way the world looks at robots and humans forever.

It’s interesting to watch this trailer after the preview for The Avengers: Age of Ultron. Ultron shows audiences how toying with robotics and artificial intelligence comes with dangerous risks, and Chappie feels happier and inviting.

Blomkamp’s District 9 premiered in 2009 and received universal praise from critics and fans and was even nominated for an Academy Award in four categories, including Best Picture. His next film, Elysium, starred Matt Damon, Jodie Foster, and Copley. It was released in 2013 and received mostly good reviews.