Marvel looks to take on television again with its upcoming series, the second airing on Netflix, Jessica Jones. The show is slated to premiere on November 20th of this year and all of the first season’s thirteen episodes will be available at once. Recently, a short teaser trailer was released. Get a peak!

So it’s a lot of teaser and not much trailer. However, it’s dripping with artistry and a seemingly gritty style. The trailer has already been viewed over a million times on YouTube. The show is being developed by writer Melissa Rosenberg and stars Breaking Bad’s Krysten Ritter.

Fans will have to understand that the tone of the show is likely to resemble that of Daredevil, the dark and violent Netflix predecessor. In an interview with Entertainment Tonight, Marvel’s Head of Television, Joseph Loeb, mentions that the show is simply based on more adult themes, “The source material came that way. She has real problems with a number of things that she abuses! And we’re not shying away from that. There’s no tidying her up.” 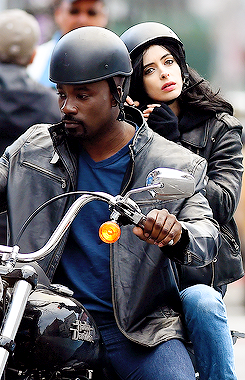 Jessica Jones is a former superhero dealing with a different sort of bad guy…post-traumatic stress. Jones opens a private investigation agency in an attempt to help others and put her personal problems aside. She’s dark, but lovable and does her own thing. “Jessica Jones is a brawler,” creator Melissa Rosenberg says. “She gets drunk, she gets pissed off and boom, you’re down. She doesn’t wear a costume. She doesn’t have a mask. She’s just who she is. She’s an extremely blunt, direct person, and that applies to the action, as well.”

Following Jones on Netflix will be Marvel’s Luke Cage, premiering sometime in 2016 and starring Mike Coulter. Iron Fist will be the fourth series, but, as of now, has not been cast and no filming schedule has been set. Following the four series will be The Defenders, where all four characters will team together to take down the baddies of New York City. Filming will begin after all four series have aired.

Sound like Marvel overload, or are you psyched for more potential Netflix binging?

If you enjoyed Carly’s overload, you can find the rest of her work right HERE on Sci-Fi Bloggers. You can also follow her on Twitter @MrsCarlyRodgers.