The machine of industry that is the Marvel Cinematic Universe seems like such a sure thing now that it’s easy to forget how big a gamble it was from day one. Proper care had to be taken to build the audience awareness to the point they’d be willing to go along with these arguably B-level Marvel characters through their introductions, their big team up and their further solo adventures as well. Based on Iron Man 2, however, one would be forgiven in not having much confidence in the direction these movies were headed.

Iron Man 2 is a lame sequel. Unsure of the direction it wants to take, there is this lather, rinse, repeat feel to it to the point where nothing meaningful has happened and we probably could have skipped the whole thing.

Picking up right after Tony Stark (Robert Downey Jr.) announced his superhero identity to the world, he’s now under pressure to hand over the Iron Man technology to the American government. Meanwhile, Ivan Vanko (Mickey Rourke), the son of a disgraced man with ties to Stark Industries, constructs his own specialized suit in order to enact his own special brand of Russian vengeance, which gets the attention of Justin Hammer (Sam Rockwell), a rival weapons manufacturer clearly jealous of Tony’s genius.

Starting with some of the good, Robert Downey Jr. is once again a bright spot, making what appears to be an unlikable character irresistibly appealing in spite of himself and, as is the case here, the movie he is in. Also, some of the comedy bits work very well, most of them coming from Sam Rockwell’s zany brand of ambition and desperation as Hammer. It looks like he’s having the time of his life here and it’s infectious, making you wish more had been done with the character.

The story, on paper, is a logical next step and could’ve been something truly special. But, as the film goes on in fits and spurts, it becomes apparent it isn’t really interested in satisfactorily paying off any of the ideas it sets up. Let’s take a look at just a few…

First, we have Tony Stark’s dilemma. The arc reactor technology that powers the Iron Man suit and keeps bomb shrapnel from piercing his heart is slowly turning his blood toxic. As the movie so bluntly puts it, the thing that is keeping him alive is also killing him. Tony is at a point where he might very well consider himself invincible, so it’s fitting that something unexpected and completely out of his control can bring about his downfall.

This newfound sense of mortality brings out a more reckless side of Tony than we’ve ever seen before. Unfortunately, all he does is drink, pee his pants and engage in a brawl with Rhodey (Don Cheadle, replacing Terence Howard) before Nick Fury (Samuel L. Jackson) basically comes out of nowhere to provide the missing ingredient Tony needs to save his life, Deus Ex Eye Patch. With thirty minutes of screen time to spare at this point, any sense of tension or conflict has been sapped away and I’m just waiting for it to be over at that point. 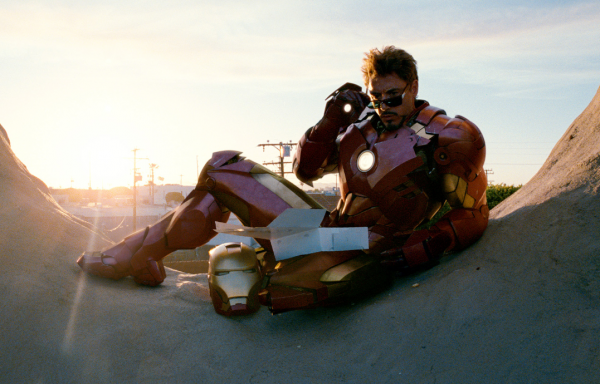 The main villain, for all intents and purposes, is Vanko. He’s out for revenge against the Stark family for ruining his father’s legacy. So, he uses some old arc reactor blueprints lying around his dingy hovel to combat Tony Stark out in the open. Once he’s done this, the fallacy that Tony Stark has been feeding the world, that no one can replicate his Iron Man technology, is exposed as a lie.

After this confrontation, Vanko tells Tony that his scheme was to simply disprove Tony’s authority in everyone’s eyes. So, at this point in the movie, Vanko has succeeded in his plan and there’s no real reason to keep him around, especially when the only reason for doing so is that we can then have another underwhelming fight scene between three guys in metal suits.

Every interesting plot thread is solved too easily and with little consequence. That’s probably the key word to sum up the problems with Iron Man 2. Everything lacks consequence. It’s what made the first movie so effective. There were consequences to everything Tony or his company did, and his actions were a direct result of that. Here, by the time it’s over, everyone’s basically forgotten about Tony’s poor behavior and no one questions his worthiness of the suit, which is really what this movie seemed to be building up to but never got around to exploring.

While the story problems are the main issue here, I find myself more disappointed in how poorly handled the romance is between Tony Stark and Pepper Potts (Gwyneth Paltrow). The first film had a great set up for their eventual coupling, but it’s sidelined here until the last couple of moments and we’re expected to act like they’re relationship has been developing the entire time. Pepper’s character in particular is really given the short end of the stick, reduced to a shrill voice in Tony’s ear that’s reprimanding his every move.

Barring the continued entertainment value in seeing Tony Stark on the screen again, Iron Man 2 underachieves at every turn. The narrative sacrifices bits and pieces of its own for the good of another movie, and doesn’t amount to anything cohesive. The action scenes, few and far between, aren’t very dynamic and the whole movie appears to have existed in a vacuum, where nothing that happened has any real bearing on what’s to come.

Thankfully, if memory serves correct, the worst is now behind us.