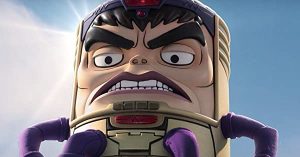 M.O.D.O.K. Represents Something New For Marvel

With the doors opened by Deadpool, we were bound to see another R-rated Marvel comedy. But M.O.D.O.K. was not the villain I would’ve expected. This strange, ugly, little brain ball is an interesting choice for what’s essentially a sitcom. However, despite a lot of trepidation, I did eventually see the appeal and the promise of the idea.

And that appeal starts with the voice talent. Patton Oswalt has shown himself to be a solid actor both in person and as a voice. Here he brings a solid mixture of Zim (from Invader Zim) and his own voiced Professor Dementor (from Kim Possible). The man intimately understands how to deliver lines to maximize comedic energy. Even though I have my criticisms, I want it to be clear that he did a tremendous job. This was not an easy character to make likable, much less engaging. M.O.D.O.K. is a straight-up murderer and jerk, but here he’s still got real emotional range. 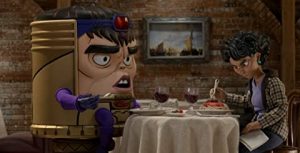 M.O.D.O.K.’s not alone in being surprisingly deep, however. The series would not be nearly as good if not for two other characters. The first is Jodie, voiced by Aimee Garcia. She’s a complex, interesting woman, who’s frustration with her husband M.O.D.O.K. is palpable and leads to some of the previously mentioned emotional moments. I was not expecting to see a grounded depiction of a divorce, but the show makes it feel devastating. You somehow can even imagine how these two were a couple, while still mining their romantic scenes for humor. The interplay of Jodie’s lifestyle brand and yet total comfort with how her husband is a megalomaniacal villain is as funny as it is underplayed.

The other character that does come into her own eventually is the daughter. I’m usually sick of the unruly and temperamental teenage girl character, especially in sitcom scenarios. They tend to be one-note, and that’s still true here. But dialing up that stock character into a sociopathic and gaslighting monster is inspired. I’m sure it’s been done before, but they really commit to the idea, and it only gets more engaging. 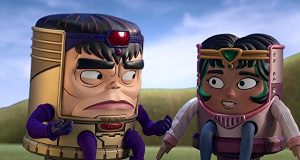 M.O.D.O.K. Has A Few Very Strong Characters In It

There are a few problems with the series, though. It’s not by any means a masterpiece. My first criticism is not a deal-breaker, but it might turn off viewers: the show can be ugly. The animation looks awkward especially with episode three’s Ciegrimites (who are from a comic, believe it or not), but certain characters make it an eyesore. M.O.D.O.K. is a mutated head in a hover chair, as is his daughter, so it would never be a beauty contest, but the faces can be genuinely hard to look at in certain scenes. Once I noticed the mouths were animated somehow on top of the puppets, I could not unsee it. Melissa’s mouth reminded me of Clutch Cargo—and that’s not a compliment. More “human” human characters have a surprising amount of distinct and personality-filled facial movements, especially the eyebrows, but the bad moments are often enough to be distracting. 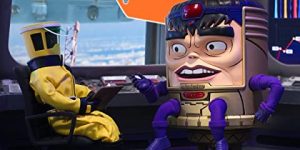 Some Ugly Visual Designs Hold The Show Back

However, a more substantial issue is simply the comedy. It’s hit or miss throughout the episodes. M.O.D.O.K. gets his good lines, but the general humor feels both too safe and yet too gorily/sexually juvenile. The Ciegrimites play heavily into shock humor, while “horse golf” was too surreal. It’s not that I found nothing hilarious, I just was on my toes the whole time, waiting for a groaner or something else to deflate the momentum. There don’t appear to be rules to the comedy, which is oddly important in a series like this. Deadpool was chaotic, sure, but we always had an understanding of the style. M.O.D.O.K. is a show that might break the fourth wall once, then go into dry satire for ten minutes, then have an extended farting gag. There’s little cohesion, and it pulls you out of the world. 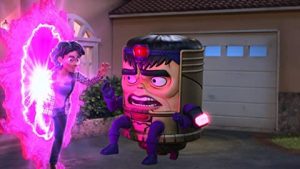 Comedy Writing In M.O.D.O.K. Is All Over The Map

If you’re still planning to watch M.O.D.O.K., watch it for the characters and the solid emotions. The comedy serves more to soften a sad exploration of a messed-up man. It’s more Living with Yourself (if you remember that odd show) than Rick and Morty. I find myself wanting to watch more because I want to know what happens to these people, not to get a hearty chuckle. Not to destress or for escapism. M.O.D.O.K. feels like an experiment for Marvel, and I’d like to see what it teaches them for their next creation.