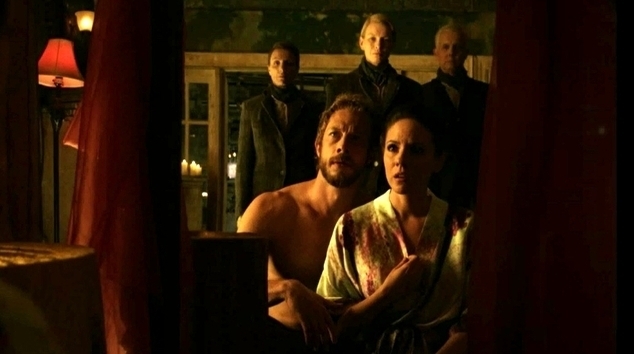 So, last week, we left off in the above picture with those damn Una Mens taking my Dyson away and sentencing him to death. After shaking down a monk, in which, we learn that Bo’s sexy touch powers don’t work on a eunuch, we find out that not only are they charging him with getting it on with Bo, but they’re also slapping treason onto his charges. Apparently, way back in his heyday, there was a massacre with Dyson’s pawprints all over. But our wolf is NOT a killer. This week’s mission: Prove Dyson’s Innocence.

The kids went to the extreme in this episode and had Trick set up a session for Bo with an Oracle (who had mucho attitude). The Oracle was supposed to be used to send Bo into Dyson’s head to find out the real story about what happened all those years ago. Lauren’s there to help do some doctor-type stuff I guess. When Bo asks why she’s helping, Lauren says (and I quote VERBATIM), “Dyson’s family.” I thought I was going to choke from GAGGING. Since when is Dyson family?! #1: That’s your competition. #2: Last season, you kind of held him hostage and stole his DNA. Oh, are we supposed to have forgotten about that? I’m still pretty salty.

Anyway, they use the red string of Fate to tie Bo into Dyson’s memories. I was very pleased with that part because, as you kiddos know, I’m an Asian dramanista (neologisms are fun) and the red string of Fate is always brought up. Lauren ties the string on Bo and the Oracle, and Kenzi uses her super sleek, squirrel skills to tie another string around Dyson’s leg. (By the way, she does this while they’re washing him. Dyson is chained up, and I didn’t know they washed prisoners in the dungeon. How humane. Or was this another Lost Girl in-order-to-further-the-plot thing?) This whole experience is terrifying because there’s the fear that being inside of Dyson (had to) could drive Bo insane, and Kenzi’s risking her life every second she stays in the dungeon.

Next, is the journey into Dyson’s past as Bo. It’s pretty cool seeing Bo turn into a wolf, and be Bo, but also Dyson when she looks into a mirror. This episode definitely boasts the skills of the Lost Girl editing staff and cameramen. Also, we learn that Dyson used to hook throughout Europe. Well, not hook, but…philander. He got all the panties (!) until he swore his allegiance to Trick. He said really cool when he did that, like “Destiny is nothing without action.”

By the way, LAUREN IS ALL OVER THIS DAMN EPISODE. One of the side effects of this little mental transfusion is that images from Bo’s memory seeped into Dyson’s. So, we get a blonde bartender Kenzi and a singing (obviously Lip-syncing, but it sounds like Lauren, so maybe she recorded herself actually singing?), French Lauren, who plays Dyson’s love interest, Flora. Once you get past the accent, Flora is a hot mess. She’s the one that kills all of those people that Dyson’s being convicted for, but not on purpose. There’s these magic slippers (that look terrible and cheap) that makes whoever wears them go all coo-coo, changes their eye color, and forces them to kill people.

Back in reality, Kenzi BLOWS HER COVER with a ringtone and gets caged in with Dyson, who is completely unscathed about his impending execution (he has so much faith in Bo!!!). He even says that, when he gets out, he’s going to train Kenzi as a shadow thief! I’m so excited!!

Anyway, Bo gets too into Dyson’s mini memory movie and doesn’t want to leave. She finds out that the guy who had given Flora the magic shoes was one of the Una Mens people, and he was the one truly responsible for the deaths of all those people. In an attempt to save Bo, Lauren puts herself into Dyson’s head and tells her leave. Problem is, humans aren’t supposed to do that. When Bo gets out, she gives Lauren a sleeping beauty kiss and wakes her up. 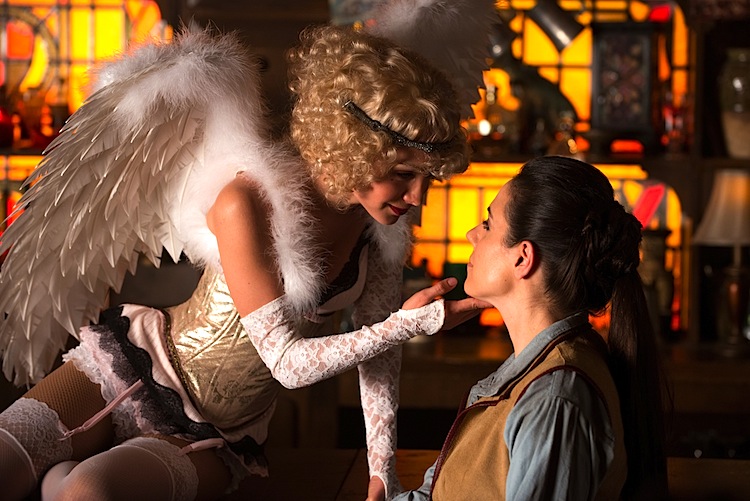 And then BOOM, Bo saves the day! Dyson and Kenzi are free, and now we’re going to go find the magic shoes in the next episode!

This was probably the best episode so far, but what the hell? My spidey-senses are tingling. Lauren and Bo are going to get back together, and they’re going to bring in another love interest for Dyson. I FEEL it. That’s what going to happen!! I’m trying to stop myself from watching ahead (I ALREADY KNOW WHO RAINER IS! DAMN YOU TUMBLR!), but I FEEL IT. Last season, I thought Dyson and Tamsin were going to go somewhere, but that didn’t happen, and Tams doesn’t have her memory back yet anyway. However, Lauren was the lead in Bo’s version of Dyson’s memories and that must mean that she’s still got it bad for the girl! Also, the passion between Bo and Dyson is nowhere near what it was in the first and second seasons. Ah, I’ll just have to wait and see!

But hey kiddos, remember this: Destiny is nothing without action!

Translation: Get off your arses and go do something!